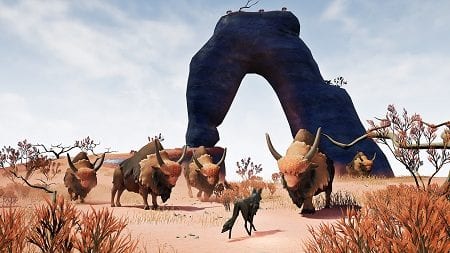 How do you stop a buffalo from charging? Take away its credit card.

Although most of our favourite video games are lengthy, character-driven scenarios with a healthy serving of action, we’ve also been known to enjoy more artistic fare. As such, because of its colourful world and tranquil vibe, we coloured ourselves intrigued by the trailers for Lost Ember, the debut effort from developer Mooneye Studios. Now the time has come to explore that world.

One of the primary gameplay elements here is your ability to inhabit the bodies of various types of animals. You’re a wolf by default and can switch back to that form at any time (provided doing so won’t cause your demise), but you’ll also play as a wombat, duck, fish, elephant and more. Most have a specific purpose — for instance, wombats can enter smaller spaces, moles can tunnel under objects, and so on — and will appear when needed.

It makes for limited problem solving, and the more invested you are in locating the game’s various collectables (such as mushrooms and artifacts), the more time you’ll spend as other critters to search off the main path. Most critters handle decently enough, even if having to tap a button repeatedly to move forward for some is a tad annoying, though we took issue with the ducks that oddly don’t appear capable of gaining any altitude.

Presentation is Lost Ember‘s strong suit, offering up a vast world full of colourful scenery and lots of different creatures. There were definitely times when we just stood still and panned the camera to take in the scale with some of the more impressive views. There’s also a good variety with grasslands, lush jungle-like settings, barren deserts and eventually snowy peaks. Animal design is quite cute, and the wolf has a unique look, though the red-hued flashbacks didn’t click on the same level.

All of that praise comes with one significant caveat, however, as the frame rate can really struggle to keep up. If it was an occasional occurrence it’d be easy enough to overlook, but it happened a lot on our PS4 Pro, sometimes basically grinding the game to a complete stop. It’s pretty rough.

There’s a mellow, enjoyable soundtrack to accompany you on your journey, dipping and swelling in the right spots. The voice acting doesn’t fare as well. It’s not bad, or even wooden, but it doesn’t seem to fit particularly well. This is particularly true with the “ember,” which does roughly 95 per cent of the talking (a few flashbacks are voiced). It was OK when he was essentially narrating, but when it was time to show emotion it felt off.

Since Lost Ember is primarily about its story we’ll stick to the broad strokes to avoid any possible spoilers. It’s a tale of a fallen civilization whose belief was that when you die your spirit ascends to the City of Light, assuming you followed their guidelines. Those that don’t are left to wander as “lost embers” or reincarnated as animals. You play as the latter, a member of that civilization that returned as a wolf, whereas your companion is stuck and believes the way to ascend is for the two of you to help one another.

Progression is linear as you’ll encounter what look like smoldering bonfires that will trigger memories when you approach them. After you’ve seen the key moments from that area the glowing enclosure that prevents advancement will crack, signaling you can break through and move on. There will often be secondary (read: optional) memories in less obvious locations that will flesh out some details as well, though you’re not obligated to track them down.

Your decision on whether or not to hunt for the game’s extras — memories, artifacts and various types of mushrooms — will have a major influence on the run time. If you stick to the main path you should be able to wrap it up in a few hours. If you prefer to explore you might add a couple more. For us, only the additional memories were compelling enough to seek out, but it’s still nice that it’s there for those looking for a lengthier experience.

Ultimately, how you feel about Lost Ember will likely come down to what you think of the story being told. To us it was solid, broaching serious topics while tracing the downfall of a civilization, but it stumbles at times with the delivery. We also found the destination rather predictable with the twists being easy to anticipate — to the point that not having the twist would’ve felt like a bigger twist.

If you enjoyed games like Journey or Abzu, then Lost Ember is an easy sell. While it never hits the highs of Journey, it’s still mellow and visually striking despite its technical hiccups.

By HC Green
Tags: Lost Ember, Video Game Review
This entry was posted on Saturday, November 23rd, 2019 at 7:37 pm and is filed under Herija Green, Video Game Reviews. You can follow any responses to this entry through the RSS 2.0 feed. You can leave a response, or trackback from your own site.