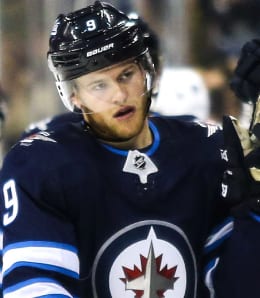 Andrew Copp has a chance to take advantage of injuries. (Bildbyrån)

Welcome back to another week of Fantasy hockey. Hopefully, your season has gotten off on the right foot, but either way, the wire is your best friend right now, so use it wisely.

This week, the Rangers continued to load up on draft picks, acquiring a 2021 fourth rounder (and AHL defenseman Nick Ebert) from Ottawa in exchange for forward Vladislav Namestnikov; the Penguins will be without star Evgeni Malkin for quite a while after he suffered a lower body injury last Saturday; and the Devils signed blueliner Joe Morrow to a two-way deal and then immediately waived him in the hopes he’ll clear and they can add depth to their AHL team.

And now, let’s get to our Fantasy hockey waiver wire recommendations, this week with a decidedly Penguin flavour…

Andrew Copp, C, Winnipeg Jets (ESPN: 0.6 per cent; CBS: 2 per cent): With Bryan Little (concussion) currently out, Copp finds himself at centre on the Jets’ second line, flanked by Kyle Connor and Nikolaj Ehlers. Winnipeg has a heavy schedule to begin the season, making Copp an interesting early-season pickup in deeper leagues. He’s never really been on our Fantasy radar, and while he slipped a bit last season because of his own concussion and isn’t off to a blazing start so far, at nearly 16 MPG, he’s seeing way more ice time than ever before. Copp is a solid two-way player with a wicked wrist shot (see video below), so it’s worth exploring to see if he can stick in the top six.

Jared McCann, LW, Pittsburgh Penguins (ESPN: 6.2 per cent; CBS: 26 per cent): McCann caught our attention in mid-March shortly after getting traded to Pittsburgh. It was a great call as he went 6-5-11, +5 in 16 games that month. He’s one Penguin that should get a boost from Malkin’s injury, especially in terms of power play time. Last Saturday, McCann fired home a pair of goals (including the game winner) and added a helper, his only points so far this season. Last season, he enjoyed a career-high 35-point campaign, and is likely headed for a better total this time around. McCann doesn’t get many penalty minutes, but as long as he’s playing on the Pens’ second line, he’s worth grabbing.

Zach Aston-Reese, LW, Pittsburgh Penguins (ESPN: 0.3 per cent; CBS: 2 per cent): Aston-Reese isn’t off to a great start, but he’s been getting a decent amount of shots and the points will come. Better yet, he’s likely due for a boost in PT now that Alex Galchenyuk is hurt. With tutelage from Sidney Crosby, Aston-Reese has a chance to take the next step this season, but for now, he’s likely just deep league fodder.

One of the original punk bands, the Ramones had a legendary career spanning 1974 to 1996. In 1993, they released their 13th album, Acid Eaters, a tribute disc to their favourite artists. The album kicks off with a cover of the Amboy Dukes classic “Journey to the Center of the Mind.”

By RotoRob
Tags: Andrew Copp
This entry was posted on Saturday, October 12th, 2019 at 3:25 pm and is filed under HOCKEY, RotoRob, The Wire Troll. You can follow any responses to this entry through the RSS 2.0 feed. Both comments and pings are currently closed.