The Wire Troll: Arodys Vizcaino Getting Healthy for Atlanta 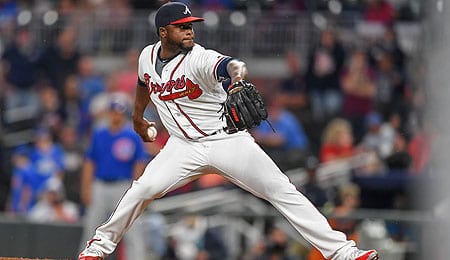 Arodys Vizcaino is on the comeback trail for the Braves. (Dale Zanine-USA Today Sports)

Welcome back to another week of Fantasy baseball. We’re definitely into the dog days of summer now, with the homestretch right around the corner. Keep trolling that wire, peeps!

This week, the Cubs flashed some serious leather, turning an MLB record-tying seven double plays on Friday; Oakland continues to surprise, pulling within a game of the Astros; and Jose Urena has opted to appeal his six-game suspension for nailing Ronald Acuna Jr. with a pitch.

Arodys Vizcaino, RP, Atlanta Braves (ESPN: 45.6 per cent; CBS: 47 per cent): Vizcaino (shoulder) is making progress, beginning to throw this week. He’s been a bit easier to hit this year, but before his injury he was on a roll, with 14 straight scoreless outings. Yes, A.J. Minter has done a bang up job since taking over the closer role in Atlanta, but the rookie is untested in the pressures of a pennant race, so don’t bet against Vizcaino possibly reclaiming the gig. Either way, Vizcaino will be a Fantasy asset next month, so consider stashing the Dominican veteran now. We all know how dominant he can be when he’s healthy (see video below for a reminder).

Nathaniel Lowe, 1B, Tampa Bay Rays (ESPN: NA; CBS: 4 per cent): Now’s the time of year that Fantasy teams that are out contention in dynasty leagues start scouring the minors for future help. Lowe, the Rays’ 13th round pick in 2016, is one minor leaguer that’s made a huge jump this season. He began the year at High-A, flashing great extra-base power, before a promotion to Double-A in late-June. At Double-A, Lowe upped his walk rate and was even more impressive, earning a bump up to Triple-A about a week and a half ago, holding his own since the move. We really love his improved contact rates this season. This is a 22-year-old dude that hasn’t received the airplay most top prospects get, but he’s quietly had a superb season. Now is the time to jump on Lowe’s train.

Jackson Tetreault, SP, Washington Nationals (ESPN: unowned; CBS: NA): Here’s another kid that has forced his way onto the prospect radar this season. Tetreault was a workhorse at Class-A, recently getting promoted to High-A. He showed great poise in his debut at the level, working around runners in scoring position in three of his five innings to record a scoreless outing with seven Ks and just one walk. Tetreault’s record (5-10) doesn’t jump out at you, but the 22-year-old has recorded a solid 3.65 ERA with over a strikeout per inning. He bears watching as he moves through the Nats’ system.

Stephen Gonsalves, SP, Minnesota Twins (ESPN: 0.6 per cent; CBS: 6 per cent): It’s been a lost year for the Twins, prompting them to dump several veterans. More moves could be on the way, which could open the door for a September callup for Gonsalves. Minny’s No. 5 prospect has had some control problems this year, yet his overall numbers are really strong, and he looks like a future workhorse capable of being a real asset in strikeouts. Gonsalves looked good in Spring Training and has a legitimate chance to win a rotation spot next year. Now is the time for the Twins to audition him for that role.

Willy Adames, SS, Tampa Bay Rays (ESPN: 23.2 per cent; CBS: 35 per cent): Adames didn’t hit particularly well when he was first called up, but since the end of July, he’s been on fire. Through the first 14 games of August, all he did was hit .386 with an 1110 OPS while swiping four bags. With Daniel Robertson (thumb) likely done for the season, there are more at-bats for Adames, and based on what he’s doing now, he looks poised to live up to our preseason billing as the No. 26 prospect in the game.

Harrison Bader, OF, St. Louis Cardinals (ESPN: 22.2 per cent; CBS: 34 per cent): There’s a lot to like about Bader, and even more now that Tommy Pham has been traded away from the Cards. Bader has been on a serious tear this month (1051 OPS) and is still rolling with six hits over the last three games. We love that his walk rate this year has hit a new career high, especially given his speed. Bader needs to be owned down the stretch.

Thomas Pannone, SP, Toronto Blue Jays (ESPN: unowned; CBS: unowned): Pitching exclusively out of the bullpen so far, Pannone has shown nice strikeout potential. Now he’ll get to start for injured Marcus Stroman on Wednesday, with a nice matchup against the O’s.

Hunter Strickland, RP, San Francisco Giants (ESPN: 11.2 per cent; CBS: 31 per cent): Strickland (finger) has been activated, and while he’ll pitch in a set-up role to start, it’s just a matter of time before he’s closing again.

Adam Plutko, SP, Cleveland Indians (ESPN: 4.5 per cent; CBS: 8 per cent): Plutko has been recalled to make the start Saturday against B-More. He’s had some luck in the majors so far, but his control has been superb at Triple-A.

Today, we’re going with a classic from the First Lady of Song. Here’s Ella Fitzgerald‘s song “Later” from 1954, which appeared on a 1976 MCA compilation album called Billie Holiday & Ella Fitzgerald.

By RotoRob
Tags: Arodys Vizcaino
This entry was posted on Saturday, August 18th, 2018 at 5:33 pm and is filed under BASEBALL, RotoRob, The Wire Troll. You can follow any responses to this entry through the RSS 2.0 feed. Both comments and pings are currently closed.