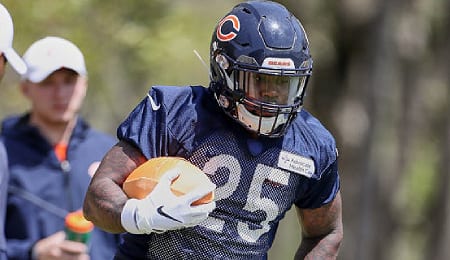 Mike Davis has some value while he’s the top back for the Bears. (247 Sports)

The 2019 NFL season is underway, and we’ve already had some surprising news. The Chicago Bears suffered a disappointing loss to the Packers last week and we can assume Chicago’s Super Bowl odds have dropped. You can take a look at the list of sites here to find out what their current odds look like. Again, the season has just started so take these odds with a grain of salt. Much can change over the next few months.

One area that needs to change is the Bears’ offense. After losing 10-3 in Week One, Head Coach Matt Nagy didn’t mince words: “Three points is ridiculous.”

After showing some growth in his sophomore season last year, quarterback Mitchell Trubisky was awful, completing just 26-of-45 passes with one pick and no touchdowns. He was sacked five times.

Questions abound even more now about Trubisky’s ability to develop into a franchise quarterback. He managed to elevate his game to about average in 2018, but after some very questionable decision making in the season opener, there’s a sense of panic about this Bears team right out of the gate. At this stage, Trubisky is not even a recommended Fantasy backup QB. Maybe he’ll be a decent bye week play, but in standard formats, we’d ignore him.

Running back Mike Davis garnered only five carries for 19 yards, with six receptions. We’d add him to Fantasy teams for the time being until rookie David Montgomery begins to take over the job. There’s no doubt Davis has some skills (see video below), but ultimately he’s a journeyman at best, and he is unlikely to sustain value all year.

Don’t forget about Tarik Cohen, who has shown he can be dynamic force when given the ball. He had a solid day receiving, but did not attempt a single rush. What? The Bears need to work this dude into the running game for it to succeed.

All told, Chicago was held to 46 yards rushing on just 2.9 YPC. Yuck City.

Wide receiver Allen Robinson was the only Bear to put in a solid performance in Week One, racking up over 100 yards receiving, just the second time he’s done that with Chicago. The 13 targets he had tied him for third in the league for the week, another very promising sign.

As Chicago’s pass attack gets its act together, Robinson should be even more useful. For now, he’s a mid-range WR3 in Week Two.

One-time psychedelic gods Pink Floyd released The Wall on November 30, 1979, leaving it just two months and change away from its 40th birthday. From this classic comes “One of My Turns,” which was the B-Side to the album’s first single “Another Brick in the Wall, Part 2.”

Now it’s your turn. After peaking at 12-4 last year, how will the Bears do this season?

By RotoRob
Tags: Chicago Bears
This entry was posted on Wednesday, September 11th, 2019 at 11:41 am and is filed under FOOTBALL, RotoRob, Team report. You can follow any responses to this entry through the RSS 2.0 feed. You can skip to the end and leave a response. Pinging is currently not allowed.