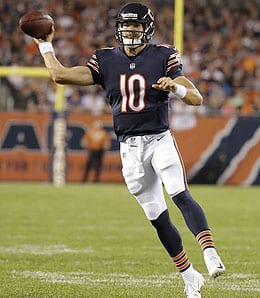 Well, things don’t always go according to plan, do they?

After beating their arch rival Green Bay, 24-17, on Sunday, the Bears officially clinched the division while improving to 10-4 — a major surprise given that most preseason projections pegged this as a six-win team.

Then again, considering Chicago had won only 14 games over the last three years combined, it was a little tough to see this kind of step forward coming, right?

Hell, Da Bears have even been great to wager on, going 9-4 vs. the spread heading into Week 15.

So what happened to spur such a major turnaround and Chicago’s first playoff appearance since it last won the division in 2010?

For starters, quarterback Mitchell Trubisky has taken a major step forward in his second season. After a stellar performance against the Pack (20-for-28 for 235 yards with two touchdown passes and no picks), he’s now closing in on 250 completions after managing fewer than 200 as a rookie. Trubisky’s completion rate has soared from 59.4 per cent to 64.9 per cent, and while he’s been picked five more times (in 49 more attempts), he also has 16 more touchdown passes this season.

It’s an incredibly exciting prospect for Bears fans as this kid still has so much more upside, but the fact that in just Year Two he’s been named to the Pro Bowl game (one of five Bears picked to play this season) and has put together one of the best seasons ever by a Chicago quarterback bodes extremely well for the future. As for the present, Trubisky does not seem overwhelmed by what he and his team have accomplished at all (see video below).

With Chicago next facing a 49ers team that has given up a lot of TD passes lately, consider Trubisky a low-end QB1 or fantastic QB2 for Week 16 as you fight for your Fantasy championship.

Lost in the elation of finally beating Green Bay (after losing nine of the previous 10 games against the Pack) — and officially eliminating the Packers from the playoffs — were some health issues.

Chiefly among these is that Pro Bowl safety Eddie Jackson — who came up huge Sunday with his sixth interception of the season — suffered an ankle injury. He had to skip practice Wednesday, but the team hopes the injury will not end his season prematurely. Jackson doesn’t have as many assisted tackles this year, but has recorded his first ever sack and has way more passes defended and picks.

If Jackson can return for the playoffs, it will make this team all the more dangerous. After starting the season by splitting its first six games, Chicago is now on a 7-1 roll, making it among the NFL’s hotter teams at the exact right time.

We’re not sure the Bears are ready to topple New Orleans or the Rams for NFC supremacy, but their odds of winning the Super Bowl are one hell of a lot more feasible now than they were heading into the season.

Now it’s your turn. Let us know in the comments below how you think the Bears will do in the postseason.

By RotoRob
Tags: Chicago Bears
This entry was posted on Wednesday, December 19th, 2018 at 7:54 pm and is filed under FOOTBALL, RotoRob, Team report. You can follow any responses to this entry through the RSS 2.0 feed. Both comments and pings are currently closed.