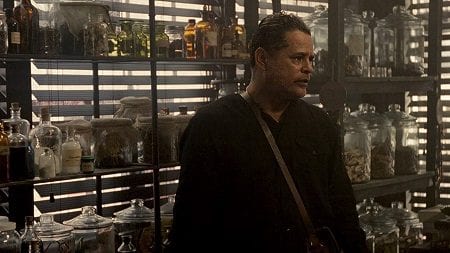 Raymond Cruz is the best part of La Llorona.

If you don’t come from, or haven’t spent a lot of time around a Hispanic family, there’s a pretty good chance you’ve never heard of La Llorona — my first taste was when my father-in-law told a story of rushing home as a boy convinced that La Llorona was following him. The abbreviated version is that she’s a spook story parents told their children to behave: if you don’t go to bed, La Llorona will come and take you away.

Now, audiences around the world have the chance to share that terror with the release of The Curse of La Llorona, the sixth film in the ongoing Conjuring universe.

In 1970s Los Angeles, caseworker Anna (Linda Cardellini; Daddy’s Home) is asked to check in on the family of Patricia Alvarez (Patricia Velásquez; The Mummy), whose children have not been showing up to school. When Anna arrives, she finds the children locked in a closet, freeing them against the angry pleas of their mother. The two boys are placed in temporary foster care and end up drowning that same night.

At the scene of their death, Anna is confronted by Patricia, who blames Anna and says she was trying to protect them from La Llorona. While this is happening, her son Chris, who was waiting in the car, wanders off and encounters La Llorona, grabbing his wrist and leaving burn marks. Chris doesn’t tell his mother, though, and shortly thereafter La Llorona appears outside their home, grabbing his sister Samantha.

While neither child will acknowledge what happened, Anna soon sees the evil spirit herself and seeks out Father Perez (Tony Amendola) for help. Knowing the church will move slowly, Perez sends them to former priest Rafael (Raymond Cruz; Breaking Bad). Perez goes with the Garcia family to their home to cleanse it and ward off La Llorona, setting up a showdown between the living and the dead.

Strong acting has been a staple of the Conjuring films, helping to separate them from so many other horror movies, and that continues with Cardellini and Cruz leading the charge. Cardellini does a good job as the freshly widowed mom trying to hold things together and protect her kids in an impossible situation, while Cruz brings an air of certainty and provides most of the film’s comic relief. The kids do a nice job as well.

As with its Conjuring universe predecessor (The Nun), La Llorona relies on too many paint-by-numbers cliches. How many times in one film can we do the “it’s there, it’s not there… oh no it is there!” routine? It can be an effective technique in moderation, but first-time director Michael Chaves goes to the well far too often. The same can be said of the creaking doors and jump scares. The film is also excessively dark — yes, we get it, night is scarier than day, but once again it’s just too much.

For a short film with few characters, there are several threads that go nowhere and feel like filler. Anna’s relationship with Detective Cooper (Sean Patrick Thomas) seems like it had a direction given his early involvement in the film as a family friend, but he’s kept out of the loop and disappears in the final act. The storyline in which social services shows up at Anna’s house is another two-minute scene with zero follow up. If they aren’t taking the kids what was the point?

More than 10 minutes of deleted, extended and/or alternate scenes are the featured attraction of the extras. There’s nothing essential there, but it does add a few tidbits that probably should’ve made the cut, including a line of dialogue that ties into The Conjuring. Beyond that you get around 20 minutes of making of featurettes, which includes more background on La Llorona.

The Curse of La Llorona is decent enough as a standard horror film, but there was more meat on the bone given the subject matter, and the repeated use of jump scares and lazy cliches combine to prevent it from reaching its full potential.

By HC Green
Tags: Blu-ray reviews, Movie Review, Raymond Cruz, The Conjuring, The Curse of La Llorona
This entry was posted on Friday, August 9th, 2019 at 9:35 pm and is filed under Herija Green, Movie Reviews. You can follow any responses to this entry through the RSS 2.0 feed. Both comments and pings are currently closed.