Ian Kinsler Closing in on Milestone 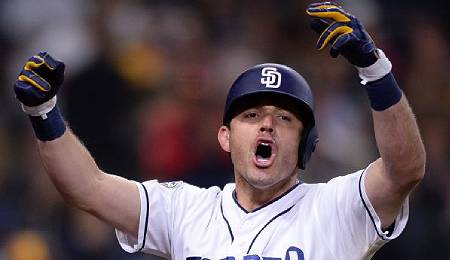 Veteran Ian Kinsler, once among the studs of the game, simply doesn’t hit well enough anymore to be a real Fantasy factor, and since the Padres have promoted both Fernando Tatis Jr. and Luis Urias, he barely starts anymore. Kinsler can still crush a ball when he gets his pitch (see video below), but it’s become a more rare occurrence.

In fact, by September 2016, we were already writing Kinsler off as a Fantasy factor. Still, he’s managed to creep within two hits of 2,000 for his career, a milestone reached by just 29 other players in MLB history that primarily played second base over their careers.

Interestingly, Kinsler will be the second player ever that either played high school baseball in Tuscon or attended the University of Arizona to reach this plateau. The other? The great Kenny Lofton, who fell just 72 shy of 2,500 career knocks.

Here is the rest of this curious top 10 list:

3. J.T. Snow (1,509): Snow had his moments, but simply didn’t swing enough of a stick to be much of a Fantasy factor as a first baseman. But man, could he pick it, earning six Gold Gloves in his career.

4. J.J. Hardy (1,488): A two-time All-Star, three-time Gold Glover and the 2013 AL Silver Slugger winner, Hardy’s period of excellence was short-lived (2007-2011, with some down years in that stretch). Still, he did enough that he’ll earn enshrinement on the Brewers Wall of Honor later this week.

5. Ron Hassey (914): The backup catcher for the 1989 World Series Champion Athletics, Hassey’s best stretch was from 1984 to 1986, curiously spent with three different teams (Cubs, Yankees and White Sox). He caught perfect games for both Len Barker and Dennis Martinez.

6. Hank Leiber (808): Leiber spent 10 seasons in the bigs from the 1930s to the early ’40s, making three All-Star teams. Between 1935 and 1940, spent mostly with the Giants before moving to the Cubs, the centre fielder was at his best, never posting an OPS+ below 109. Twice Leiber finished in the top 10 in batting during his career.

7. Tom Pagnozzi (733): Another catcher, Pagnozzi made one All-Star team, one of six former Razorbacks to ever do so. He was three-time Gold Glover and probably enjoyed his best season in 1991, when he recorded 459 at-bats over 140 games.

8. Jack Howell (632): Howell, a third baseman, spent most of his 15-year career with the Angels, with his best season coming in 1989 when he enjoyed his finest defensive year and bashed 20 homers for the second time.

American singer-songwriter Bruce Springsteen — “The Boss” — has been going at it since 1964. In 2003, he released his fourth compilation album, The Essential Bruce Springsteen, also part of Sony BMG’s Essential series of releases. Among the tracks on this collection is “Nebraska,” the title track from his underappreciated 1982 album.

Now it’s your turn. Let us know in the comments below where you think Kinsler will wind up by the time he’s done.

By RotoRob
Tags: Ian Kinsler
This entry was posted on Friday, August 9th, 2019 at 9:35 am and is filed under BASEBALL, RotoRob. You can follow any responses to this entry through the RSS 2.0 feed. Both comments and pings are currently closed.