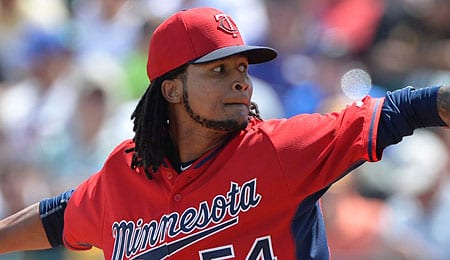 Ervin Santana has been superb for months. (USA Today Sports)

Welcome back to another week of Fantasy baseball. With most roto leagues into playoffs now, we’re going to wrap up this season of The Wire Troll with something a little different. Instead of our usual waiver wire recommendations, we’ll focus on who’s hot and who’s not. Next week (or maybe the week after), we’ll present our 2016 Wire Troll All-Star Team.

This week, Jacob deGrom has been scratched from his start Sunday and now faces season-ending elbow surgery; Carlos Carrasco suffered a broken finger after being drilled by a line drive; and Joe Ross is expected to finally return to the National rotation on Sunday.

Ervin Santana, SP, Minnesota Twins: After hurling seven shutout innings and striking out nine against a hot Mets team fighting for a playoff spot (a start he wasn’t pleased to walk away from without a win as you can see in the video below), Santana now has a 2.31 ERA over his last 16 starts. That’s basically half a season’s worth of work. Not too shabby, huh? He’s stayed healthy this year, and while the losses have piled up thanks to him playing for an awful team, Santana’s record has masked some real fine peripherals.

Bruce Rondon, RP, Detroit Tigers: Rondon’s career high streak of 10 straight scoreless outings was snapped Friday, but he got right back on the horse and started another one on Saturday. Heading into the season, we wondered if newcomer Francisco Rodriguez would be the tonic Rondon needed to get his act together. Clearly, that’s worked, as Rondon is enjoying his highest K rate and lowest walk rate. The improved control will stead him well as a sneaky Fantasy asset in 2017.

Zack Britton, RP, Baltimore Orioles: After nailing down his fifth save of the month on Friday, Britton is now a perfect 44-for-44 for the season to lead the AL in that department. Since the end of April, he’s given up an earned run exactly once. Holy crap is this dude having a season.

Chris Sale, SP, Chicago White Sox: Despite that awful delivery that terrifies keeper league owners, Sale keeps rolling and he’s finishing 2016 on a major run. After getting slapped around by the Fish just over a month ago, he’s been lights out, pitching at least eight innings in each of his last six starts, while fanning 58 and walking just nine in 50 innings. Sale may have mechanics that portent injury, but he’s developed into a major workhorse.

Brandon Drury, OF, Arizona Diamondbacks: Drury was held to a walk on Saturday, snapping an eight-game hitting streak. It’s been a strange season for him. Usually a tremendous contact hitter, Drury is striking way more than ever, yet he’s taken a nice step forward and established himself as an MLB regular. There’s untapped productivity here, so consider this youngster a nice sleeper for 2017.

Alex Reyes, RP, St. Louis Cardinals: Reyes sure has made the transition to the bigs look easy, hasn’t he? In moving up to Triple-A this season, he endured his worst WHIP ever, yet the Cards overlooked that and brought him to the Show, easing him in as a long reliever/spot starter. Reyes has been virtually untouchable since the promotion.

DJ LeMahieu, 2B, Colorado Rockies: We talked about LeMahieu’s career year last month when we slotted him in the top 15 in our Second Base Rankings. Since then, he’s reached base in 33 straight games and has taken over the lead in the NL batting race. Perhaps we should given LeMahieu more credit? Wow!

Matt Szczur, OF, Chicago Cubs: On Saturday, Szczur recorded his first hit since August 30 to snap an 0-for-11 skid. Sure, he was a two-sport star at Villanova and he’s having a much better season this year, but he has no use outside the deepest of deep NL-only leagues, especially given his lack of regular PT on such a talented team.

Luis Cessa, RP, New York Yankees: Cessa has authored a couple of solid performances since being moved into the rotation just under a month ago, but the real issue here has been home runs. Over his last five starts, totaling 28 innings, he’s been rocked for nine dingers. Cessa’s a flyball pitcher, so this problem isn’t a big surprise. It’s just way worse now that he’s facing major league hitters.

Ian Kinsler, 2B, Detroit Tigers: This is the first time in his long and distinguished career that Kinsler has combined BA and power in the same season, but the BA has sure been sliding lately. He hit .229 in August and after a nice start to September, has cooled off again. Kinsler is 1-for-12 over his last three games and has taken three 0-for-4 showings over the last five.

Coco Crisp, OF Cleveland Indians: Crisp went yard on Wednesday, but has been taking 0-fer after 0-fer since returning to his original team. He’s batting .161 in 10 games since coming back to Cleveland. Overall, this has been a much better season for the veteran after he looked like he was on his last legs in 2015, but the return to The Tribe has not brought Crisp back to his glory days.

J.D. Martinez, OF, Detroit Tigers: Houston’s trash sure was Detroit’s treasure, wasn’t it? And while Martinez is enjoying another stellar (if injury shortened) season, but after enjoying such a torrid August, he’s cooled significantly of late, batting .115 over the last week and recording an OPS of just 700 for September.

Robert Stephenson, SP, Cincinnati Reds: Stephenson started rolling at Triple-A last month, earning himself a September call. However, walks have been his undoing upon his return to Cincy, leading to his ERA now flirting with 5.00. Stephenson has walked six batters over eight innings in his last two starts alone. That needs addressing if he’s going to stick in the bigs.

Now it’s your turn. Let us know in the comments below who has been killing it for you lately, and who’s just killing you.

By RotoRob
Tags: Bruce Rondon
This entry was posted on Sunday, September 18th, 2016 at 3:53 pm and is filed under BASEBALL, RotoRob, The Wire Troll. You can follow any responses to this entry through the RSS 2.0 feed. Both comments and pings are currently closed.