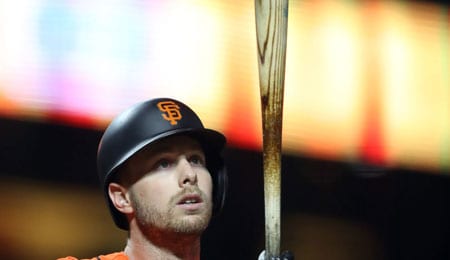 Welcome back to another week of Fantasy baseball. We’re nearing the end of July now, and with it, probably your trade deadline. Soon, the wire will be your only chance to make improvements.

This week, the Astros are the latest team to bitch about the schedule; Yankee Manager Aaron Boone‘s rant earned him an early shower; and Christian Yelich and Cody Bellinger continue to put up video game numbers in their quest for home run supremacy.

Austin Slater, SF, 1B/OF (ESPN: 2.3 per cent; CBS: 4 per cent): Slater gained consideration as a Wire Troll All-Star last year, but this season he failed to make the team out of camp. After a very productive half season at Triple-A, he was recently recalled and has been doing a splendid job of getting on base. It’s early days, but Slater is racking up the counting cats (helped along by a grand salami a couple of weeks ago — see video below). His groundball rate is way down, while his line drives and fly balls are up big time, and so far, it’s a formula for success. Up to this point in his career, Slater has looked very much like a replacement level player, but right now he’s opening eyes with his bat and his rifle arm.

Sixto Sanchez, SP, Miami Marlins (ESPN: 0.9 per cent; CBS: 16 per cent): This righty, that reminds some of the great Pedro Martinez, threw another solid game Friday. Sanchez has now pitched at least six innings five times over his last six starts, and he’s starting to rack up the wins at Double-A. A splendid dynasty option, he’s starting to look like a potential keeper league asset as he gets closer to the bigs. Sanchez’s line drive rate is a tad worrisome, but he’s sharpened his control this season and looks like he’ll soon be challenging for a rotation spot with the Fish.

Here’s another track from Milwaukee’s own Violent Femmes off its compilation disc, Add it Up (1981-1993). This track, “I Hate the TV,” was previously unreleased.

By RotoRob
Tags: Austin Slater
This entry was posted on Saturday, July 20th, 2019 at 1:48 pm and is filed under BASEBALL, RotoRob, The Wire Troll. You can follow any responses to this entry through the RSS 2.0 feed. Both comments and pings are currently closed.