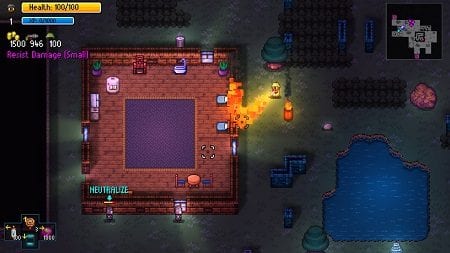 One of many viable strategies: burning this muthafu**a down.

It has taken some time, but after initially being down on rouge-like (and lite) games, some of them have started to hit home with us. Last year, Moonlighter was one of our most pleasant surprises, and Dead Cells ranked among the very best games of 2018 — hell, just thinking about those now makes us want to dive back in. The latest title to join our list of enjoyable rogue-lites is tinyBuild’s Streets of Rogue, which injects more than a little anarchy into its world.

Essentially a top-down brawler, Streets of Rogue allows you to punch, smash, burn, shoot and bomb your enemies (or friends, or random people) into oblivion. It all handles pretty smoothly — whether the moment calls for melee or ranged combat — with a pseudo twin-stick approach that allows for accurate aiming of strikes and projectiles. Interacting with objects typically brings up a secondary window that be easily cancelled out of if necessary.

Inventory management can be cumbersome at times, especially on longer runs when the number of items starts to balloon. At least time slows when cycling through items and stops entirely when you open your inventory, allowing you to locate what you’re looking for. Items can also be assigned to the four d-pad directions as hot keys, though with how quickly melee weapons degrade you’ll probably end up doing the side scroll more often.

There’s a pleasant whimsy to the simple characters that adds another layer of separation from the high doses of violence that are usually being administered. The destructible environments are also fun. Beyond that, though, the presentation doesn’t offer a whole lot. Levels are procedurally generated but still don’t feature a ton of variety, and the muted colours, especially in the early stages, create a drab feel. The soundtrack fits the action.

There’s a basic story in place in which the mayor has banned all alcohol and is living the good life atop the city, which, per the game, is stacked vertically like a lasagna. To reach the mayor and invoke an aggressive recall you’ll need to fight through five levels (slums, industrial, park, downtown and uptown) to reach the mayor and show this corrupt bureaucrat that not all of his constituents are willing to live under his tyrannical rule… or something like that.

It honestly doesn’t matter, and the story is all but abandoned after the tutorial. What does matter is the action, and when it’s firing on all cylinders Streets of Rogue can be a blast. Each stage will have a handful of objectives that you’ll need to complete in order to unlock the elevator to reach the next floor. As you get deeper you’ll unlock the ability to skip entire levels, thus minimizing the amount of lost progression.

This being a rogue-lite, however, most of what you earn will reset upon death (such as any cash or experience you’ve banked). Only the chicken nuggets, the other in-game currency, carry on, allowing you to purchase new modifiers and loadouts so that those then appear as options upon leveling up during a run. There are also several character classes that you can unlock by fulfilling certain conditions, such as killing gang members or breaking tombstones.

While the objectives can get repetitive — activate this, destroy that, kill this person — the ways to go about making it happen are consistently varied. You might go in guns (or bats) blazing in a traditional action game manner. Or you might talk to the mark, bribing or charming them out of whatever item of value you’re supposed to collect. You can set explosives on the door, knock and watch it all end that way. Contaminate vents, bribe police, hire thugs, turn into a giant, and much more.

Streets of Rogue also seeks to keeps things fresh by introducing random events on some stages, and it’s here that things can go from fun to frustrating. The game can already be quite challenging, as one wrong move can turn a solid run into a quick death. It’s unfortunate then when something entirely beyond your control does it for you.

For example, one of the random events is a series of status effects inflicted upon you and everyone else in the level. For the most part, that’s fine, but the dizzy effect wrests control away from you completely, leaving you vulnerable. One time that effect forced us to wander into view of a camera and we were then killed by a turret. That’s not challenging, that’s cheap.

Despite the frustration that came from those types of moments, it was never long before we were back on the streets, meting out justice in the bloodiest ways possible. The freedom to do whatever you want is a great draw, and the game’s humour goes a long way in smoothing over those inevitable hurt feelings.

If you enjoy a fast-paced, challenging brawler that gives you lots of freedom to kick ass in whatever way you see fit, Streets of Rogue is a strong single- and multi-player experience.

By HC Green
Tags: Moonlighter, Streets of Rogue, Video Game Review
This entry was posted on Thursday, July 18th, 2019 at 9:52 pm and is filed under Herija Green, Video Game Reviews. You can follow any responses to this entry through the RSS 2.0 feed. Both comments and pings are currently closed.