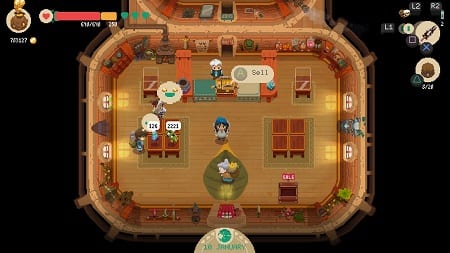 There’s no shortage of indie RPGs that ape the visual styling of the SNES era, but the concept of Moonlighter immediately caught our notice. Not only did you do the standard dungeon crawling and loot gathering, you also ran a shop in which you sold those items, making it one-part rogue-lite and one part management sim. Colour us intrigued…

On the combat side of things, Moonlighter favours a top-down perspective, allowing you to move freely but only attack in the four cardinal directions. This makes battles clunkier than we would’ve liked, resulting in a lot of accidental collision damage when trying to position ourselves to attack our enemies. This holds true whether you’re involved in melee or ranged combat. You’ll get more comfortable as you play, and there’s a definite old-school vibe, but it’s still less than ideal.

Organizing your inventory, a frequent and necessary endeavour, also feels like it was designed with a mouse in mind, making it a little sloppy with a controller. This is especially true the further into a dungeon you go as you’re constantly moving items around, selling off lesser items through a special mirror and so on. An auto-sort that stacked everything might’ve alleviated some of it, though the way certain items affect others based on positioning is likely why it’s absent.

Charming is probably the best word to describe Moonlighter‘s intimate world. There’s precious little acreage here, with a small town and a few procedurally generated dungeons you’ll visit over and over again representing the bulk of it. Despite that, the rooms are detailed, and there’s a solid roster of enemies. Your character also wears and wields the different pieces of equipment and weaponry you procure. It’s more than enough to remain visually interesting.

Things aren’t quite as successful on the audio side with a handful of tunes left to carry the entirety of the game. To their credit, the songs are mostly enjoyable, but you can only hear them so many times before they become little more than white noise.

You play as Will, an adventurer that inherited his late-father’s shop, known as Moonlighter. Your mission is to reinvigorate the village of Rynoka, which has fallen upon hard times, by turning the shop into a success and reinvesting the profits into restoring the town. To do this, you’ll need to enter the dungeons that have popped up at the edge of town, collect artifacts and then sell them in your shop, all with an eye on opening a mysterious gate.

Although you’re under no obligation to do so, most days play out like this: open the shop in the morning, sell all you can, and then head off to the dungeons at night to restock. You also have the option to sleep and tackle the dungeons during the day — enemies will be easier but loot won’t be as valuable — or just spend several days running the shop if you need to burn through an excessive amount of inventory.

As noted earlier, the combat isn’t great, but in concert with running the shop it makes for a rather addictive experience. Each run through the dungeons is a risk/reward scenario as you have a pretty limited amount of inventory space, so the longer you stay in there the more you’ll have to lose if you’re defeated as you’ll keep only the top line of items.

Transforming this into even more of a balancing act is that many items carry some kind of condition to holding them. For example, they might need to be placed in a specific row, or they might destroy whatever item is stored directly to the left of them. Not all affects are adverse, either, with some automatically depositing an item into your chest at home or allowing you to duplicate that item, potentially overriding a stack of lesser treasure.

Upon returning you’ll select items and place them on display to be sold. Then you’ll open the store, creating a surprisingly fun time as customers pour in and out of your store. Initially, you’ll have no context for what to charge, so you’ll have to observe their reactions and then adjust prices up or down accordingly. Demand can also affect pricing, though that part doesn’t feel as well fleshed out as it could’ve.

As your shop expands, things will become more chaotic, and you’ll be rushing around to display tables, tweaking prices and restocking to keep your profits up. You’ll also need to be on the lookout for thieves and eventually even filling special requests from customers.

Profits can be spent one of three ways: investing in the town, upgrading your shop or buying weapons, armour and other items. You’ll almost certainly start by paying to open new shops, allowing you to purchase and upgrade equipment, and then from there you can proceed as you like. It’ll take more than gold to get new weaponry, though, as you’ll also need items looted from the dungeons — thankfully, a handy wishlist function easily identifies needed ingredients.

For as much fun as we had with the collect-sell-repeat loop, it’s worth noting that Moonlighter takes a good while to get rolling. The first several hours are pretty slow as you try to scrape up enough money to move deeper into the initial dungeon. Just know that if you’re starting to grow weary of the formula early on that it gets much better in a hurry.

One thing that never improves, however, is the story. Outside of little snippets of writing found in notes and occasional interactions with your grandfather there’s nothing to drive the narrative forward, leaving the gameplay to carry the whole thing.

Despite its shortcomings — chiefly a throwaway story and uneven combat — Moonlighter sucked up hours of our time as we happily busied ourselves hunting relics, selling them for profit and investing the money in an increasingly elaborate shop.

By HC Green
Tags: Moonlighter, Nintendo Switch, Video Game Review
This entry was posted on Wednesday, December 5th, 2018 at 9:14 pm and is filed under Herija Green, Video Game Reviews. You can follow any responses to this entry through the RSS 2.0 feed. You can skip to the end and leave a response. Pinging is currently not allowed.