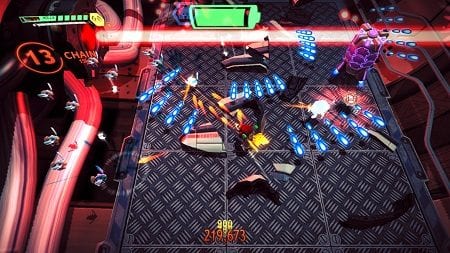 Pew, then more pew, and then an additional helping of pew!

Even though we’re at a point where titles and trailers shouldn’t sway us… well, they still do, and when pitches to review the unfortunately named Assault Android Cactus Plus on PlayStation 4 (and late Xbox One) showed up in our inbox they were politely declined. Its recent Switch release finally convinced us it was time to take a look, and it turns out we’re glad we did.

A twin-stick shooter (and one that includes no actual succulents), Assault Android Cactus tells a very straightforward story: you are Cactus, a member of some sort of Galactic Police Force that is shot down while investigating a space freighter’s distress call. Once on the ground you’ll need to contend with a malfunctioning AI that has imbued the countless robots that inhabit the ship with murderous intent.

Visually, the game is colourful and pleasant, and it ably fills the screen with enemies and all manner of projectiles without issue. Level design is fairly clever, and the developers have a few tricks up their sleeves to keep things fresh as you progress. On the audio side, the music is fine and a robotic voice will chime in now and then.

In terms of setup, everything handles well, though the ability to remap the trigger to another button would’ve been a nice quality of life inclusion. With the base character you rarely take your finger off the trigger, which can get wearisome after awhile. Beyond your primary weapon you can also switch to a more powerful option for a limited time. Smart toggling between the two along with power-up collection is important to putting together strong runs.

There’s nothing unique about the game’s progression as you’ll advance through a handful of rooms, take down a boss and move on to a differently themed area. It does mix things up by having success or failure being time based. Take too much damage and you’ll temporarily shut down, but as long as you’re able to collect enough batteries to keep your android charged you can finish a level no matter how many times you’re put down.

Batteries are dropped by defeated enemies along with temporary boosts such as increased speed or additional firepower. The drops will change after several seconds, cycling through all available upgrades, which creates a bit of strategy as you decide whether it’s worth grabbing what you can in the moment or circling back to collect exactly what you want.

Although there are no stats to improve, you do unlock additional characters, each with their own unique pairing of primary and secondary weaponry. Their inclusion offers up alternate ways to play through the levels, and you’ll undoubtedly have ones you like (shotgun android) and ones that don’t quite click (rail gun!?!?).

Beyond the campaign there’s also a survival mode that challenges you to stay alive through as many waves as possible and move up the online leaderboard. That’s pretty much the entire incentive for multiple runs through campaign levels as well, as you’ll get graded based on your final score. The game also features four-player local co-op, though we were unable to put that to the test.

Assault Android Cactus Plus is a damn fine twin-stick shooter that offers plenty of fast-paced action at a low price point. While it doesn’t do much innovating, fans of the genre should come away feeling satisfied.

By HC Green
Tags: Assault Android Cactus Plus, PlayStation 4, Video Game Review
This entry was posted on Monday, March 25th, 2019 at 1:35 am and is filed under Herija Green, Video Game Reviews. You can follow any responses to this entry through the RSS 2.0 feed. Both comments and pings are currently closed.