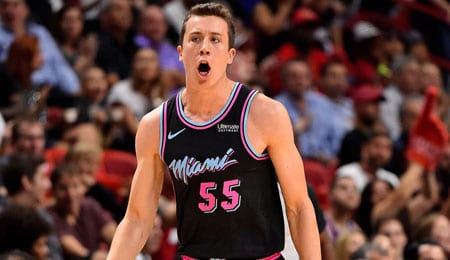 Welcome back to another week of Fantasy basketball. With the NBA season nearly done, this will mark the final NBA Wire Troll of the season. We hope our picks have helped you kick some ass in your leagues. Stay tuned for our Wire Troll All-Stars coming up soon.

This week, Marcus Smart got dinged with a $50,000 fine for shoving Joel Embiid; Phoenix forward Kelly Oubre Jr.‘s career season is done thanks to a thumb injury that requires surgery; and Jimmer Fredette is getting yet another shot in the NBA after being signed by the Suns.

And now, let’s get to our final set of Fantasy basketball waiver wire picks of the week…

Evan Turner, SG, Portland Trail Blazers (ESPN: 3.2 per cent; CBS: 10 per cent): With C.J. McCollum out, Turner makes for a real nice short-term pickup and excellent DFS play right now. Turner simply hasn’t been seeing enough action lately to be useful (in fact, his 19 minutes on Wednesday marked his highest total since February 13), but that’s probably about to change. The fact that he missed several games with a knee injury recently hasn’t helped. Turner has never lived up to being the second overall pick in 2010, but has certainly been Fantasy worthy at times over his career. Coming out of college, he was lauded for his ball handling skills, but his jump shot was weak. Turner’s actually having one of his best shooting seasons ever, albeit with limited touches. Let’s see what he can do with some more run.

Duncan Robinson, PF, Miami Heat (ESPN: unowned; CBS: unowned): Robinson is unlikely to provide help this season, but as a dynasty league option, he deserves a shout out. Recently brought up from the G-League, he played just six minutes on Friday and is expected to be inactive on Saturday. However, Robinson went off for 36 points on Tuesday and has averaged 21.4 points in the G, so he’s definitely someone to watch. He’s not known as a defensive stalwart, but could be a solid offensive player and decent two-way player down the line. Remember this name, peeps; he can really light it up from downtown (see video below).

Maxi Kleber, PF, Dallas Mavericks (ESPN: 3.8 per cent; CBS: 19 per cent): The Mavericks starting PF is seeing more minutes now that Tim Hardaway Jr. is out for season. You may recall that we recommended Kleber in mid-January when he first got a chance to start, and it was a good call as he shot much better in January and then got a season-high in touches per game in February. Given Kleber’s rebounding work this month (eight boards per game over the last 10), he’s become even more attractive.

Miles Bridges, SF, Charlotte Hornets (ESPN: 8.3 per cent; CBS: 19 per cent): Bridges has been getting a chance to start lately as he puts the finishing touches on his rookie season. In his last two games, he’s seen at least 29 minutes and has responded with one double-double and one near miss. Bridges surprised many by opting to return to Michigan State for his sophomore season, but in retrospect, perhaps that was wise given that he hasn’t exactly dominated his first NBA campaign.

Wayne Ellington, SG, Detroit Pistons (ESPN: 4 per cent; CBS: 10 per cent): Ellington is another sweet DFS target given his work from downtown lately (13 treys in the last two games). He’s scored at least 23 points in each of the last two, although his turnovers are up over the last 10 games. Ellington’s PT has been on the rise since December, and he keeps getting more touches. Oh, and that shooting slump he endured in Miami? It’s gone now that he’s in Motown.

Emerson, Lake and Palmer was one of the original “supergroups,” with artists that had gained fame with other bands (The Nice, King Crimson, The Gods, The Crazy World of Arthur Brown and Atomic Rooster). They released Brain Salad Surgery on their own label (Manticore Records) in 1973. One of the classics from this album is “Toccata,” an adaptation of Argentinean composer Alberto Ginastera‘s 1st piano concerto, 4th movement, of which he wholeheartedly approved. Small wonder…

By RotoRob
Tags: Evan Turner
This entry was posted on Saturday, March 23rd, 2019 at 8:08 pm and is filed under BASKETBALL, RotoRob, The Wire Troll. You can follow any responses to this entry through the RSS 2.0 feed. Both comments and pings are currently closed.