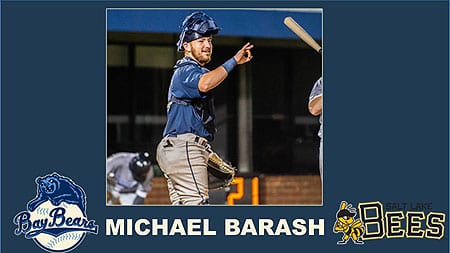 Last week, the Southern League (Double-A) held its All-Star Game in Birmingham, Alabama. Below, we’ve written brief bios of the players that made the midseason classic. This level tends to include a mix of real prospect and guys that have stalled out, so some of them are on their way to bigger and better things, and some of them are likely reaching their high points by being selected to this game.

Last week, we looked at the North Division roster; today, we’ll examine the South Division roster. Again, there were several instances of players selected that had to be replaced; we’re focusing on the final roster.

Michael Barash, C, Los Angeles Angels: This Texas A&M product has a good catcher’s build and he saw more action at Double-A this year, although with worse results. Regardless, Barash was promoted to Triple-A last week. Last year, he had a power breakout at High-A (see video below), but hasn’t shown the same pop this season.

Rodrigo Vigil, C, Miami Marlins: Vigil doesn’t have much extra-base pop, and is struggling to duplicate what he did in his first taste of Double-A last year. He’s going to be passed on the depth chart by up and coming Roy Morales, who is tearing it up at High-A.

Tyler Marlette, 1B, Atlanta Braves: Seattle’s fifth rounder in 2011, Marlette has flashed fine power and extra-base hit capability in his career, but doesn’t have much speed. He’s been stuck at Double-A for quite a few years, but given how many total bases he’s racking up this year, maybe he’ll finally get a promotion to Triple-A.

Shed Long, 2B, Cincinnati Reds: One of the top 10 prospects for the Reds heading into the season, Long has delivered, hitting better in his second crack at Double-A, although his elite walk rate has slipped a bit. There’s nice speed potential here.

Eric Jagielo, 3B, Miami Marlins: The Yankees’ first round pick in 2013, Jagielo was dealt to the Reds in the Aroldis Chapman trade in 2015 and then moved again in Spring Training this year to Miami. Now in his fourth season at Double-A, Jagielo did get promoted to Triple-A last year, but scuffled badly. Back at Double-A, he is not hitting as well, and is clearly a failed prospect. We’re not sure how he made the All-Star team.

Jake Hager, SS, Milwaukee Brewers: Hager has been bouncing between Double-A and Triple-A for a few seasons now, but enjoyed a power breakthrough this season, and was recently rewarded with another promotion to Triple-A. Earlier this month, he went hogwild, homering in four straight games (spanking five dingers in total).

Aristides Aquino, OF, Cincinnati Reds: After a huge season at High-A in 2016, Aquino fell off the radar with a poor showing in his Double-A debut. He’s repeating the level this year and is faring better, notwithstanding a reduced walk rate.

Zach Gibbons, OF, Los Angeles Angels: Short and stocky, Gibbons is repeating Double-A this year, and while he missed time for injury for the second straight season, an improved contact rate has led to better results.

Monte Harrison, OF, Miami Marlins: In his first season at Double-A, Harrison started slowly, got hot towards the end of April, but has scuffled a bit since. He’s scoring plenty of runs, but will need to improve his slash line before he gets promoted.

Corey Ray, OF, Milwaukee Brewers: Heading into 2017, Ray was among the game’s brightest prospects, but other than staying moderately healthy, he didn’t progress as hoped. Regardless, he was promoted to Double-A this year and has rewarded Milwaukee’s faith with some nice extra-base sock in a breakout effort.

Troy Stokes Jr., OF, Milwaukee Brewers: Stokes got his first taste of Double-A over the final few weeks in 2017, and has built on that showing with by flashing his power-speed potential. Milwaukee’s No. 20 prospect had 20 homers and 31 steals last year, so is definitely someone for Fantasy owners to keep tabs on.

Tyler Neslony, DH, Atlanta Braves: Atlanta’s ninth rounder in 2016, Neslony was excellent in High-A last year, but then struggled upon a promotion to Double-A. Back at the level this season, he’s shown improvements despite a massively lower walk rate. This is another dubious selection, for our money.

Daniel Lockhart, INF, Atlanta Braves: Originally a 10th round pick by the Cubs in 2011, Lockhart is now in his third season at Double (he briefly appeared at Triple-A in 2013), and has gradually improved, finally putting together some decent counting cat numbers. Keith Lockhart‘s son isn’t really a prospect, however.

Zack Brown, P, Milwaukee Brewers: A fifth round pick in 2016, Brown has made rapid progress through the Milwaukee system, reaching Double-A this year. He’s put up a much better record than he had at Class-A, going undefeated through 15 starts, while recording a very fine ERA. Brown should force his way into prospect status soon.

Matt Custred, P, Los Angeles Angels: A 31st round pick by Atlanta in 2015, Custred was released in January and picked up by the Halos 11 days later. After starting the season with a few middling appearances at High-A, he was moved up to Double-A for the first time and has responded with a very fine ERA.

Nate Griep, P, Milwaukee Brewers: Milwaukee’s eighth round pick in 2015, Griep’s ERA has risen half a run over what he did in High-A last year, but he seems a little less wild this year.

Thomas Jankins, P, Milwaukee Brewers: One of the Brewers’ more intriguing prospects heading into the season, Jankins was originally a 13th round pick in 2016. He doesn’t have an overpowering heater, but has posted an excellent record at Double-A despite some wildness issues.

Jeff Kinley, P, Miami Marlins: Kinley posted a career-best 9.4 K/9 rate before getting a promotion to Triple-A last week. He certainly benefited from an extremely low BABIP while at Double-A, so some regression is likely. Kinsley also struggled when called on to close, bagging just two saves in five tries.

Robinson Leyer, P, Cincinnati Reds: Leyer has a better record this season, his fourth at Double-A. He’s developed into a decent set-up man and finally looks ready to move to Triple-A.

Keury Mella, P, Cincinnati Reds: This is Mella’s second season at Double-A, but he also made a start at Triple-A two years ago and a couple of relief appearances in the bigs last year. His strand rate is a tad higher than usual this year so take his 3.20 ERA with a grain of salt as his FIP is well over 4.00.

Nick Neidert, P Miami Marlins: Batters are hitting the ball the other way more often than ever against Neidert, suggesting they’re having a tougher time catching up to his stuff. He’s racking up the innings in his second crack at Double-A, and the Ks are way up. This kid’s a prospect.

Jon Olczak, P, Milwaukee Brewers: Olczak is really limiting the line drives this year and it’s helped him post another great looking ERA pitching exclusively out of the bullpen. His WHIP is off the charts good (0.80).

Alex Powers, P, Cincinnati Reds: A 25th round pick by the White Sox in 2013, Powers was released in Spring Training 2015, but caught on with the Reds’ organization the following year. He’s converted into a short-relief role this year, doing a fair bit of closing, and has enjoyed much better results in his second crack at the level.

Quintin Torres-Costa, P, Milwaukee Brewers: Milwaukee’s 35th round pick in 2015 out of Hawaii, Torres-Costa is enjoying a breakout effort in his second season at Double-A. He’s massively improved his ERA, although he still can be a tad wild at times.

Touki Toussaint, P, Atlanta Braves: A superb Dynasty league asset, Toussaint is gaining valuable experience in his second crack at Double-A, and looks about ready to get bumped up to the next level.

Back in my formative years, AC/DC was one of the first bands we gravitated to as we began our musical journey. Their third album, Dirty Deeds Done Dirt Cheap, was released in 1976, but didn’t get released here until 1981, by which point we were already hooked. From that classic LP, here’s the still hilarious “Big Balls.”

Now it’s your turn. Let us know in the comments below which Southern League players are catching your eye.

By RotoRob
Tags: 2018 Southern League All-Star Game
This entry was posted on Monday, July 2nd, 2018 at 2:46 pm and is filed under BASEBALL, Prospects, RotoRob, Scouting Report. You can follow any responses to this entry through the RSS 2.0 feed. Both comments and pings are currently closed.