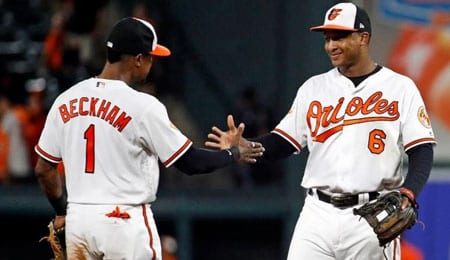 We expect Tim Beckham to play a big role in the second half. (Eutawstreetreport.com)

Welcome back to another week of Fantasy baseball. June wraps up this weekend, leaving the All-Star week under two weeks away. Keep your foot on the pedal and work that wire!

This week, the Mets got more bad news as GM Sandy Alderson is taking a leave of absence as he deals with cancer; Mike Trout (finger) has returned to playing the outfield; and the Cubs have lost 3B Kris Bryant to the DL because of shoulder inflammation.

Tim Beckham, 3B, Baltimore Orioles (ESPN: 2.4 per cent; CBS: 13 per cent): We’ve all heard the ubiquitous rumours that Manny Machado will be shipped out of B-More at the deadline as the floundering O’s seek to rebuild. Assuming that happens, Beckham is likely to take over as the everyday shortstop, and while that may not sound exciting, don’t forget about how good he was last year. His extra-base pop has been nearly non-existent this season, but since coming off the DL this week, he’s starting to show signs of life with three hits, including a double, over the last two games. Beckham is not an everyday player now, but could be a great stash as it’s likely his value could spike down the stretch. Just remember, this dude was the No. 1 overall pick in 2008 for a reason. At the very least, Beckham is clearly happy to be back in the lineup (see video below).

We weren’t huge fans of the Beastie Boys when they first surfaced. Other than “No Sleep ‘Till Brooklyn” and a couple of other tracks, we didn’t have much time for them. But then came “Sabotage,” which spurred us to closer explore their back catalogue. From 1989’s Paul’s Boutique, here’s “Johnny Ryall,” about a dude they once knew.

By RotoRob
Tags: Tim Beckham
This entry was posted on Saturday, June 30th, 2018 at 1:33 pm and is filed under BASEBALL, RotoRob, The Wire Troll. You can follow any responses to this entry through the RSS 2.0 feed. Both comments and pings are currently closed.