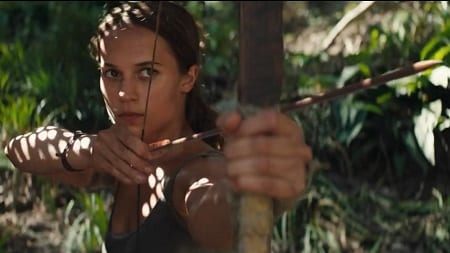 Vikander was a great choice as young Lara.

Five years ago, Square-Enix pulled off one of the gaming’s industries top reboots, sending a flailing Lara Croft back to her youth and creating a new origin story with Tomb Raider. Now, Warner Bros. is trying to do the same thing, subbing out Angelina Jolie, who hadn’t played the role since 2003, for Alicia Vikander. The question is whether this Tomb Raider can do for the film series what the game did for it.

In the wake of her father’s disappearance, Lara (Vikander) is making her living as a bike courier, refusing to sign the necessary paperwork that would allow her to inherit her father’s businesses and his vast wealth. A brush with the law brings her back in contact with an old partner of Richard (Dominic West; The Wire), who convinces Lara that she needs to move on and sign lest her father’s assets be sold off, including his beloved Croft Manor.

At the signing, one of the company’s associates presents Lara with an ancient puzzle left to her by her father. Solving it reveals a secret compartment with a key and sends her off to find the lock. When she does, she discovers that there was much more to Richard than business, and after viewing a tape he made shortly before his disappearance she decides to follow in his footsteps and attempt to track down the mysterious island of Yamatai.

Her quest leads her to the same boat her father chartered, now captained by Lu Ren (Daniel Wu; Geostorm), whose own father also vanished seven years ago. The two of them take to the seas in search of Yamatai, thought to be located in the dangerous Devil’s Sea. Their seafaring comes to an abrupt halt when a storm rips the ship apart, but when Lara awakens she finds herself on the island — and as it turns out, getting there is going to be the easy part.

We all know the long, sad history of video game movies, so let’s start with this: at no point during Tomb Raider did we feel like we were watching a film based on a game. Casting Vikander, West and Walton Goggins in the main roles provides some solid acting at the top, and each of them is given the chance to at least flesh out their character a bit.

Vikander shines the brightest, though, effortlessly projecting an image of both innocence and emerging strength — it’s a long way from Jolie’s fairly sexually charged portrayal, and it’s meant to be since the gaming series dialed back early Lara’s “proportions” with the reboot. As with the game, however, Lara’s transition from doe-eyed victim to hardened killer feels rushed after both handled her initial kill quite well.

Although we’d classify Tomb Raider as an adventure flick, there’s plenty of good action here with Vikander battling rushing rapids, clambering through WWII-era planes and all manner of other stunts (many lifted from the game). There aren’t a lot of gunfights, though that’s almost certainly deliberate as part of the reboot was setting aside Lara’s twin pistols for a bow and arrow.

This is, by and large, an origin story, and as is often the case things can move a little slowly early on as the board is reset. While the general plot follows the 2013 video game, we get tacked on elements like Lara as a bike messenger and her trying to locate the boat. One of our complaints about the original Lara Croft movie was that it took too long to actually start raiding tombs, and this has a whiff of deja vu.

It’s cool that they borrowed the broad strokes of the game for the plot, and of course you’re not going to be able to condense a 15-hour game into a two-hour film. We accept that. What’s odd, though, is that the game was heavy on the supernatural whereas the movie balks at forging ahead with that and instead veers into a more practical interpretation. It’s more grounded in reality, but it’s not nearly as interesting or cinematic (just ask Indiana Jones).

There are four extras here, three of which are pretty standard: a short catch-all about making the film, a look at Vikander’s physical preparation and a breakdown of the scene in which Lara gets swept downriver. The last and most interesting is a 10-minute examination of the franchise’s evolution, dating back to its original launch back in 1996. Gamers should enjoy it for its nostalgic flavour, though there’s zero mention of the Jolie films, which feels kind of odd.

This is easily the best Tomb Raider movie and a solid adventure film, and seeing it should be a no brainer for fans of the series. For everyone else it’s a nice popcorn flick that you’re unlikely to remember much about after the credits roll.

By HC Green
Tags: Alicia Vikander, Angelina Jolie, Blu-ray reviews, Lara Croft, Movie Reviews, Square Enix, Tomb Raider
This entry was posted on Monday, June 11th, 2018 at 8:35 pm and is filed under Herija Green, Movie Reviews. You can follow any responses to this entry through the RSS 2.0 feed. Both comments and pings are currently closed.