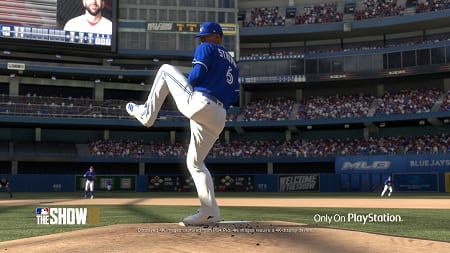 Sure, the Yanks have Judge and Stanton, but the Jays have Stroman…

March is always a great month for sports fans. Free agency starts in the NFL, the NHL and NBA enter the playoff race, the NCAA tournament begins, and, of course, baseball returns. Along with all the usual accoutrements (peanuts, hot dogs, beer) comes another season of Sony’s MLB The Show, a franchise that has earned its place on the Mount Rushmore of sports games.

Armed with a brand new 65-inch 4K television and PlayStation Pro, we took the series’ newest entry, MLB The Show 18, and put it through its paces. Here’s what we found.

As usual with this series, The Show 18 has its players covered with multiple options for handling pitching, hitting and more. On the mound, our love affair with metered pitching dates back to the long-defunct MVP series, but true analog feels tight as well and is a bit more forgiving. At the plate, zone hitting seems to deliver the best experience with directional checking in at a close second.

While the gameplay experience has changed very little structurally, there have been some obvious under-the-hood improvements over previous years, starting with the hitting. It feels like the developer has found the right balance between difficulty and fairness, and the way the ball cracks off the bat with improved physics creates natural outcomes — in other words, things like timing and squaring up on a pitch matter.

Defense has also received some attention with loads of new animations and more weight given to the ratings, as top defenders will get to balls that average ones won’t. Tagging has been cleaned up as well, though perhaps it has become a little too efficient and needs to scale back a touch.

Errors also happen too frequently for our taste, particularly on what should be routine plays, though that could get corrected with sliders or even a patch.

As already noted, we upgraded our setup, so we were expecting the best visuals we’ve seen from the series. And while we definitely got them, it was because of more than just the hardware change. Uniform textures pop off the screen and players look more lifelike than ever.

There are more camera angles and presentation elements as well, including varying crowd sizes and increased weather effects, making for an experience that does a great job aping the real thing.

On the audio side the commentary team has been shuffled once again with Mark DeRosa stepping in to replace Harold Reynolds alongside holdovers Matt Vasgersian and Dan Plesac. In an effort to improve the flow and realism, that trio recorded a lot of lines together with largely positive results, though it’s still a little uneven and can’t match what’s done annually in NBA 2k.

In-game effects are good, whereas the recap that plays during franchise needs to be patched — it’s constantly congratulating players on breaking all-time career records for everything from home runs to strikeouts since it doesn’t recognize any non-Show history at this stage.

If there’s an area in which MLB The Show 18 lags it’s in signature improvements, but let’s set that aside for the moment and lead with this: moment to moment, pitch to pitch, this is the best and most realistic representation of the game of baseball we’ve ever experienced. Is it leaps and bounds beyond its predecessors? No, but true aficionados will appreciate improvements across the spectrum.

Circling back to the modes, Road to the Show, Franchise and Diamond Dynasty remain the game’s three main options. Gone are Season Mode and online Franchise, and although they weren’t modes we used over the years any time a title pares down its options it’s a downer.

Road to the Show has undergone some modest but noteworthy changes, starting with the creation of your player as you’re now tasked with selecting a pre-canned archetype to start your career. Your batter might be a power hitter, best suited for corner outfield and first base, or a defensive stud with speed for shortstop or centre. Pitchers can be flamethrowers, control artists and so on.

Your selection affects where your ability in various areas will be capped, all but ensuring you’ll never be able to create a truly dominant five-tool player or overpowering starter with pinpoint accuracy. The decision to have your attributes ebb and flow based on your on-field performance is a good one, and the off-day training options can grant you immediate improvement or raise your cap for later on.

Meanwhile, Franchise mode has seen minimal changes. The layout has been cleaned up a bit for improved ease of use, and breaking up the calendar into phases (spring training, the draft, free agency, etc.) helps keep your focus where it needs to be, but there isn’t a lot of meat in the bone in the areas in which we’d like to see it, such as scouting, contract negotiations and player development.

Diamond Dynasty, The Show‘s virtual card collector, has received the most attention, though said changes can be classified more as refinements alongside a core experience that remains fundamentally unchanged. You’ll still play through the tiered programs to unlock rewards such as better (or even legendary) players and various collectible souvenirs like hats, jerseys and, of course, bobbleheads.

There’s an absolute ton of stuff you can unlock in Diamond Dynasty, and if you’re willing to invest enough time you can assemble a great team. It’s never been our favourite, however, and it feels like it has consistently received more attention in recent years than its brethren RttS and Franchise. Hopefully next year it’ll be a different mode’s turn for some overdue TLC.

While a lack of new content for two of its primary modes is a mild disappointment, MLB The Show 18 ultimately delivers in all of the most important areas to give gamers the best playing baseball game to date.

***A PS4 code was provided by the publisher for purposes of review.***

By HC Green
Tags: BASEBALL, MLB, MLB The Show 18, New York Yankees, Sony, The Show, Video Game Review
This entry was posted on Thursday, March 29th, 2018 at 12:52 pm and is filed under BASEBALL, Herija Green, Video Game Reviews. You can follow any responses to this entry through the RSS 2.0 feed. Both comments and pings are currently closed.