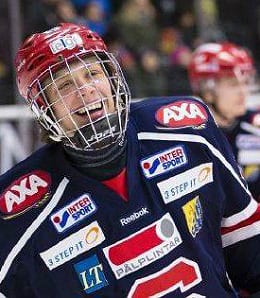 David Pastrnak brings some serious talent to the Bruins. (Czechprospects.blogspot.com)

The 2014 NHL Entry Draft is over and with the league well into the offseason and free agency, it’s time to see how they did. Today, we’ll kick it off with part one of the Atlantic Division.

With an already impressive young prospect pool, a team like Boston can afford to have a so-so draft every now and then. The Bruins’ pool is deep in meat and potato players and somewhat lacking in elite talent — an issue the team quickly addressed with the selection of Czech winger David Pastrnak with the 25th overall pick of the draft. At 5’11” and 168 pounds, Pastrnak isn’t big, but he’s speedy, elusive and provides electrifying offense, which he is already showing off at the Bruins developmental camp (see video below). The talented youth proved just how dangerous he can be with eight goals, 24 points and a plus-7 rating in 36 games played against grown men with Sodertalje of Sweden’s Allsvenskan.

With the 56th overall pick, Beantown then added Ryan Donato — a kid who absolutely tore up the high school ranks with 37 goals and 78 points in 30 games last season. Without a third round pick, the 2011 Stanley Cup champs took Surrey Eagles captain Danton Heinen with the 116th overall pick. A point-per-game player this past season in the BCHL, Heinen is headed to the University of Denver to play college puck this fall. The Bruins rounded out their draft class with U.S. NTDP forward Anders Bjork and Swedish defender Emil Johansson with their fifth and seventh round picks, respectively.

In all, Boston snatched up four forwards and a defenseman. For having just five picks, GM Peter Chiarelli made the most of it, and because of that, we’ll give him a B-.

It’s hard not to give a team with six picks in the first three rounds of the draft anything less than an A+. So, we’ll stick to our guns on this one.

With the second overall pick, General Manager Tim Murray and the Buffalo Sabres selected Kootenay Ice captain Sam Reinhart. A total package player, Reinhart dominated the WHL last season, scoring 36 goals and 105 points with a plus-24 rating in 60 regular season games while adding an additional six goals and 23 points in 13 postseason games. As Buffalo continues in rebuild mode, Reinhart is a captain in waiting that is all but guaranteed to make his debut in October.

Without a fourth round pick, Buffalo picked a pair of high school players — left winger Max Willman and centre Christopher Brown — with its fifth and sixth round selections before wrapping up its draft with Swedish forward Victor Olofsson, an intriguing dark horse candidate that dominated Swedish juniors for Modo’s U-20 affiliates this past season.

Definitely sticking with an A+ on this one. The Sabres are well on their way to becoming one of the NHL’s elite young clubs.

The Red Wings haven’t missed the playoffs since before this writer was born — and he just turned 24 years old. As you can probably deduce from that statement, there is certainly a proud and rich heritage within this organization that goes far beyond just being an original six team.

The beauty of Detroit’s success on the ice is that it all stems from the sheer brilliance of the draft table. Pavel Datsyuk, Henrik Zetterberg, Gustav Nyquist and Johan Franzen were all drafted in the third round or later, and current top-six defenseman Jonathan Ericsson was the 291st and final pick of his draft year — not bad for the 2002 draft’s “Mr. Irrelevant.” While the golden era of the 1990s and 2000s is clearly behind it the club does have four Cups and six Finals appearances to show for it. That said, it’s time for a rebuild in the Motor City, though it’s possible to still do so without a complete overhaul.

The Red Wings’ prospect pool is filled with versatile forwards and mostly mobile defenders, but the lack of sizable forwards has been a concern for the club, and it addressed it by taking five big centres and an even bigger left winger in monstrous 6’5″ Finn Julius Vahatalo. Headlining the draft class is stud U.S. NTDP power forward Dylan Larkin, who will continue his development under the watchful eyes of Detroit’s scouting department close by at the University of Michigan. In addition to six forwards, the club made sure to address goaltending depth with the selection of Chase Perry with its fifth round selection.

In a weak draft, Detroit added size, skill and just depth in general with very little risk involved. It’s a solid C, with the potential for much, much more if the Red Wings’ scouting staff managed to find another diamond or two.

After passing on Seth Jones with the second overall pick in the 2013 draft, the Cats finally got their future franchise No. 1 defender when they made Barrie Colts captain Aaron Ekblad the top selection in the 2014 NHL Entry Draft. It also can’t be said that the Panthers were narrow-minded in their draft selections, as they selected six players — a defenseman, a centre, two right wingers, a left winger and a goaltender — from six different leagues (OHL, WHL, Finland-Jr., USHL, High-MN and Sweden-Jr. U-18s).

Without question, Florida’s biggest weakness heading into this draft was the lack of a clear-cut future All-Star No. 1 defenseman on the horizon. That was instantly addressed with the selection of Ekblad and really, nothing else mattered after that. With a plethora of young forward talent in the system, the lack of right wing depth wasn’t as concerning, but the additions of Finn Juho Lammikko and the U.S. NTDP’s Joe Wegwerth was enough to put that concern to bed for the time being.

The biggest weakness was addressed, as well as a secondary weakness, and one of the NHL’s best prospect pools just looks even better. It deserves a solid A.

The Montreal Canadiens, Ottawa Senators, Tampa Bay Lightning and the Toronto Maple Leafs are coming up next as we conclude our Atlantic Division draft analysis with Part II. Stay tuned.

Now it’s your turn. Let us know in the comments below how you think your favourite Atlantic Division club did in the draft.

By Dakota Case
Tags: 2014 NHL Entry Draft
This entry was posted on Wednesday, July 16th, 2014 at 9:55 pm and is filed under Dakota Case, Draft report, HOCKEY, Prospects. You can follow any responses to this entry through the RSS 2.0 feed. Both comments and pings are currently closed.