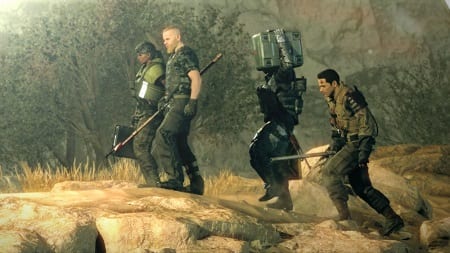 Metal Gear enters a post-Kojima world, but can it survive…

A Metal Gear game without Hideo Kojima seems blasphemous, but Konami was smart enough to create a spin-off so conceptually ridiculous that it was clearly distant from its source material. Metal Gear Survive is a different experience that is equal parts repurposing, cash grab, experiment, and genre-hopper. Surprisingly, it’s not the disaster it should be — in fact, it’s actually pretty fun at times.

As Survive is essentially Konami recouping its investment on The Phantom Pain’s FOX Engine, many of the game controls are the same. The Phantom Pain was a mixture of exploration, combat, and menu base building/resource management.

Survive covers all those bases, and players who already played either Ground Zeroes or The Phantom Pain will feel right at home with the basics of Survive. The context of how they’re used is a bit different, of course, given that the game is survival horror rather than stealth, but in terms of its execution, it’s basically the same.

The game’s biggest difference, aside from the setting, is the emphasis on resource management, crafting and base building, all of which happen via menus and aren’t really functionally different from building out Mother Base in either Phantom Pain or Peace Walker.

Survive repurposes a lot of Phantom Pain assets, which means that it visually looks very similar. One big difference is that the zombie realm of Dite features characters by Silent Hill’s designer, so the world takes on a nightmarish quality that goes beyond the usual zombie hordes.

However, when it comes to animation, quality of character, even many map areas, it’s all The Phantom Pain under an alternate perspective — regardless of how you feel about the reuse of assets, the visuals are still top notch.

There is a story as well with fully realized voice performances and cut scenes. While these are all serviceable, it’s clear that Kojima is no longer around to balance the mix of character, action, and bizarre elements that powered the Metal Gear plot.

The basic concept of Survive is this: how could Konami take The Phantom Pain and make a Resident Evil game out of it? That’s essentially what is attempted, with some decent results. This is selling the Metal Gear brand, though, and that means a ridiculous attempt to connect the happenings in Dite to the main storyline. Without Kojima, it ain’t happening, and Survive probably would have been better off had it just been its own thing.

That being said, what can you expect with this unique game? It’s essentially a loop of the fighting, scavenging, crafting, and base building. The core gameplay and controls are literally ripped from The Phantom Pain, but there’s the gathering and searching of Don’t Starve, the tense undead combat of Resident Evil, and the base building of both the source game and Fallout 4.

Amazingly enough, it almost works. That’s probably because it was built on a solid (no pun intended) engine, and the elements were reasonably stitched together. Some aspects are poorly executed, though, such as the hunger and thirst meters (Kojima was smart enough to be very forgiving with this in Snake Eater).

In addition, there’s an always-connected requirement and a ridiculous micro-transaction to allow for a second save game — the latter is such an offense we almost feel like no one should buy Survive simply to send a message that the gaming public will not accept that.

Ultimately, the question is “who is this game for?” Because it’s not Metal Gear and shouldn’t be treated as such. For those that like survival horror or want AAA controls in a scavenging loop experience, Survive provides 25-to-30 hours of reasonably executed fun. Also, Metal Gear fans who see it as a cash grab might find something they can enjoy as well, provided they put their bitterness aside.

Stitched together from Metal Gear’s corpse, Metal Gear Survive is a bizarre experiment that actually kind of works once you put your expectations in check.