The Wire Troll: Bismack Biyombo Getting a Bit More Burn in Orlando 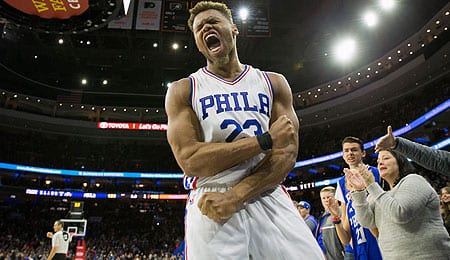 Welcome back to another week of Fantasy basketball. We’re down to the final week and a half of the regular season, so this is the finale of The Wire Troll for 2016-17. Hopefully, you’ve taken our advice and ridden it to success! Soon, we’ll be releasing our Wire Troll All-Star Team selections.

This week, Russell Westbrook continued to make a mockery of the record book, putting up the highest scoring triple double in league history; DeMarcus Cousins faced the Kings for the first time on Friday and absolutely punished them in a one-sided victory; and Carmelo Anthony — at least publicly — seems okay with his reduced role.

And now, here is our final batch of Fantasy basketball waiver wire picks for the season.

Justin Anderson, SG/SF, Philadelphia 76ers (ESPN: 1.3 per cent; CBS: 9 per cent): It was around this time last year that Anderson caught our eye, and he turned out to be a solid pickup down the stretch despite some struggles from beyond the arc. Now in Philly, his PT has risen significantly this week, and he’s taken advantage, flirting with a double-double on Tuesday, scoring 10 points on Wednesday, and then recording the double-double on Friday. With a big uptick in his bucket count in March, Anderson looks poised for a nice finish, but we’ll need to see better three point accuracy before recommending him in standard sized leagues. He even got into with Kyrie Irving on Friday, but seemed pretty chill about it after the fact (see video below).

Rondae Hollis-Jefferson, SG/SF/PF, Brooklyn Nets (ESPN: 30.8 per cent; CBS: 43 per cent): Hollis-Jefferson is on a roll, scoring at least 11 points in four straight games, putting up one double-double and three near misses. His PT is up, and he’s even contributing some blocks (four in the last three games). Three of Hollis-Jefferson’s five double-doubles this season occurred in March as he gets more action and establishes himself as a building block in Brooklyn. Pick him up in all formats to take advantage of his strong finish.

Terrence Ross, SF/SG, Orlando Magic (ESPN: 29.6 per cent; CBS: 50 per cent): The move from Toronto to Orlando has really sparked this swingman’s career, reminiscent of what happened when Tracy McGrady went from the Raps to the Magic. Of course, Ross is no T-Mac, but we are loving the massive uptick in his PT (how about 45 minutes of action in Wednesday’s overtime loss?). Ross had been shooting the lights out before Friday, and he’s been excellent from the line as well. The eighth overall pick from 2012 looks like a sweet DFS pick Saturday against Brooklyn, but he’s also a solid dude to pick up for the remainder of the season, especially given the minutes he’s seeing lately.

Jaylen Brown, SF, Boston Celtics (ESPN: 2.7 per cent; CBS: 22 per cent): Avery Bradley (illness) has been out, giving Brown a chance to start. In his start Friday, Brown again showed what an amazing athlete he is, posterizing Aaron Gordon. All told, Brown put up 12 points, three board and two treys, not elite numbers, but certainly interesting enough for consideration in deep formats. Expect him to start again Sunday.

Bismack Biyombo, Orlando Magic (ESPN: 9.6 per cent; CBS: 38 per cent): Biyombo is seeing a bit more PT lately given all the frontcourt injuries in Orlando, and in the last couple of games, he reminded us what he can do when he gets even 20 minutes of action. He recorded a double-double with two blocks in just 20 minutes on Wednesday, and the flirted with another one on Friday. Biyombo has proved very durable the last couple of seasons, but his struggles from the line and lack of a 25-minute or more role really caps his value. Still, when this dude gets hot, he can carry you, so give him a look down the stretch.

Tarik Black, C/PF, Los Angeles Lakers (ESPN: 2.7 per cent; CBS: 4 per cent): With Ivica Zubac (ankle) done for the season, Black has a chance to step up, and so far he’s done just that, scoring 10 points with two blocks on Tuesday and then just missing a double-double on Thursday. Black’s PT dipped last month, but he’ll have an increased role down the stretch, making him an attractive add in deep formats.

By RotoRob
Tags: Bismack Biyombo
This entry was posted on Saturday, April 1st, 2017 at 4:57 pm and is filed under BASKETBALL, RotoRob, The Wire Troll. You can follow any responses to this entry through the RSS 2.0 feed. Both comments and pings are currently closed.