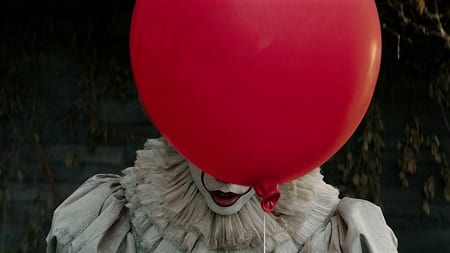 We’ve long maintained that psychological horror, while undoubtedly tougher to pull off, is much more effective than gore and jump scares. Shambling into that space is IT, based on Stephen King‘s book of the same name. Director Andy Muschietti, the creative force behind the unsettling Mama, tries to do something that’s proven surprisingly difficult over the years: turn one of King’s books into a good movie.

In Derry, Maine, circa 1988, children disappear at an alarming rate. While the cause is unknown, it continues to claim victims, including Georgie, the younger brother of Bill (Jaeden Lieberher). The following summer Bill and his friends, collectively known as The Loser’s Club, begin to experience strange and disturbing phenomenon that adults seem completely oblivious to.

Each of them is targeted individually, but they eventually confide in one another that they’ve all seen a clown named Pennywise (Bill Skarsgard) in these waking nightmares. In addition to the supernatural threat of Pennywise, the kids face problems at home from abusive or absentee parents as well as from a local group of bullies led by Henry Bowers (Nicholas Hamilton).

Rather than wait for one of their own to go missing, the kids decide that their only course of action is to confront Pennywise as a group and hope that they can defeat the creature, believing that the horrors they’ve been shown are only figments of their imagination. The truth is more complicated, however, and the group will have to stay together to overcome their fears.

Tasked with casting seven parts for children, Muschietti identified a talented group that’s critical to the film’s success. Many will recognize Finn Wolfhard, who plays Richie, from Stranger Things, and Wyatt Oleff (Stanley) from his role as young Peter Quill from Guardians of the Galaxy, but it’s a mostly anonymous group that delivers. Of the young actors, Sophia Lillis (Beverly) and Hamilton manage to stand out.

With King’s novel to draw on, IT features loads of character development that allows you to build up a legitimate emotional attachment that’s often lacking in horror movies. The city of Derry is also a non-traditional and compelling setting — in fact, much of the film takes place in broad daylight. There’s just a lot more interesting stuff happening than in the typical genre fare.

There’s also diversity to the setups. Yes, the movie leans a little too heavily on the jump scare for our tastes, but with so many targets for Pennywise you’re bound to find some of his antics frightening on a more personal level. For us it was the flooded basement and the painting that comes to life. The imagery sticks with you long after the credits roll.

There’s no real explanation for what’s going on. The kids’ reference bad events in Derry’s past, but it just sort of gets left out there and never gets paid off. Perhaps the ambiguity is intentional — it’s called IT after all — but in the bonus features it’s referred to as an entity, which is at least something. Although it’s not necessarily bad, it feels like the movie is going to reveal something and then never does.

As well as Skarsgard does and as creepy as Pennywise is, there’s still a law of diminishing returns with his appearances in terms of how frightening he is. That’s due in large to too many of his scenes ending up with jump scares in which he’s hiding or doing something slowly and then suddenly charges in some weird, blurry/shaky CGI way. More variety with the scares would’ve made the film even better.

Fifteen minutes of deleted/extended scenes highlight IT‘s modest but interesting extras. Stanley’s speech at the synagogue, which is used in one of the trailers, is the best of the bunch, but there are some other worthwhile tidbits, including the revelation of what became of Henry’s crew and a goofy alternate opening. There are also featurettes for Pennywise and The Loser’s Club, and an interview with King about his experience writing the book.

There’s a lot to like about IT, from the strong cast to the interesting settings and a memorable turn from Skarsgard, but a little more unpredictability could’ve elevated the fright level. Instead, the film is more unsettling than terrifying.

By Herija Green
Tags: Andy Muschietti, Bill Skarsgard, Finn Wolfhard, IT, Movie Review, Stephen King, Wyatt Oleff
This entry was posted on Thursday, January 11th, 2018 at 7:37 pm and is filed under Herija Green, Movie Reviews. You can follow any responses to this entry through the RSS 2.0 feed. Both comments and pings are currently closed.