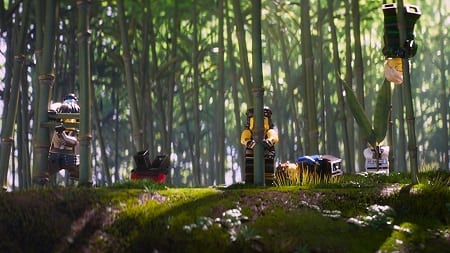 They are all terrible ninjas.

Although Warner Bros. already had a pair of successful LEGO movies on its mantel, it’s hard to argue that both of them weren’t carried by the superb work of Will Arnett as Batman. That alone made The LEGO Ninjago Movie a nice litmus test for the franchise to see how well it works minus Arnett, and also how much longer the current formula can continue to generate laughs.

On the coastal city of Ninjago, life is good… except for the incessant attacks from the sinister Lord Garmadon (Justin Theroux) and his Shark Army from their offshore volcanic island base. Fortunately for the citizens of Ninjago, they’re protected by a secret ninja force whose giant mechs have been able to thwart Garmadon at every turn.

One of those citizens is Lloyd (Dave Franco), a teenage boy who is wildly unpopular as he is the estranged son of Garmadon. What people don’t know is that Lloyd is also the green ninja and one of the city protectors along with the red (Michael Pena), blue (Kumail Nanjiani), black (Fred Armisen), white (Zach Woods) and silver (Abbi Jacobson) ninjas.

When Garmadon builds a shark-launching mech of his own, however, the ninjas appear on the verge of defeat when they use an ultimate weapon that summons a city-destroying menace. Now the ninjas, along with their leader Master Wu (Jackie Chan), must travel far to find a means of stopping what they’ve unleashed. And when Garmadon enters the equation, things become complicated for Lloyd and his father.

Minus Arnett, LEGO Ninjago needed a signature performance, and it gets it from Theroux, who is excellent as Garmadon. His timing, delivery and lines are great, and he establishes himself early on as the star of the film. Franco is good as the straight man as well, playing off Theroux effectively throughout and creating a nice chemistry. Of the ninjas we’d rate Nanjiani as the best of the rest.

If you’re into LEGO (the toy itself), it’s hard not to marvel at the things that have been designed for the film. Yes, everything is obviously CGI, but the team makes sure all those mechs and buildings in the movie can be made in real life so all those massive structures are created one brick at a time. Even three movies in that hasn’t lost its magic.

While a number of core elements feel a lot like the first two movies, making what is essentially a LEGO kung-fu flick is a cool concept that’s generally well executed. The fight between Wu and Garmadon is a good mix of action and the silliness that the LEGO franchise has become known for. Speaking of that…

…it’s getting to be time for the folks behind the LEGO films to mix things up. There are more restrained moments in this than LEGO Batman, but the general setup is very similar with fast-paced gags and plenty of winks and nods. At some point that constant level of energy with the presentation is going to lose its appeal, and we’re closer to that point now than we were at the end of Batman.

As with LEGO Batman, Ninjago has a lot of short but worthwhile extras. Topping the list are some mini movies and fully realized deleted scenes — “Baby Fight” is absolutely worth the watch for Chan fans as it recreates his trademark style of implementing regular objects into fights in clever ways, including some callbacks to Rumble in the Bronx. A pair of behind-the-scenes featurettes are decent, and the music videos should appeal to kids.

One can see a time when the LEGO films need a dramatic change to continue their appeal, but we’re not there yet. The LEGO Ninjago Movie benefits immensely from the chemistry between Theroux and Franco, and enough of the rapid-fire jokes connect that parents should still be able to enjoy it with their kids.

By HC Green
Tags: Blu-ray reviews, Dave Franco, Jackie Chan, Justin Theroux, Lego, Movie Review, The LEGO Ninjago Movie, Warner Bros
This entry was posted on Saturday, January 13th, 2018 at 4:43 pm and is filed under Herija Green, Movie Reviews. You can follow any responses to this entry through the RSS 2.0 feed. Both comments and pings are currently closed.