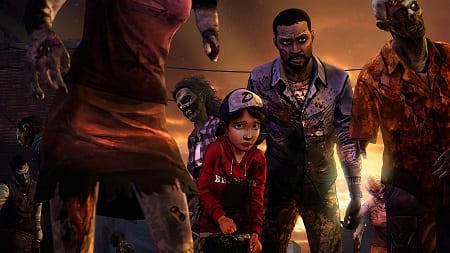 Lee and Clementine remains one of the best video game relationships ever.

​It’s nearly impossible to overstate the impact The Walking Dead had on TellTale Games. It was one company prior to April 24, 2012, and another one afterwards, leading to the acquisition of IPs like Game of Thrones, Minecraft, Guardians of the Galaxy and Batman.

Season One’s success also spawned two additional seasons, as well as a one-off starring Michonne, who is well known from AMC’s television series. With the upcoming Final Season already announced, TellTale has decided to re-release all previous Walking Dead content in a single package with The Walking Dead: The Telltale Series Collection.

It contains 19 episodes in all: three seasons of five episodes (S1, S2, and A New Frontier), the three-episode Michonne standalone side story and the 400 Days DLC that bridged the first two seasons.

There have been plenty of great relationships in video games over the years, but the bond between Lee and Clementine remains among the best. Although the idea of having a story that branches out based on your decisions has become a staple of TellTale Games, this was where it started. Everything felt fresh at the time, too, and the weight of constant misery that has weighed down the series (in all mediums) hadn’t set in, yet.

After decades of ultimately overcoming the odds in games, seeing characters that you like die routinely or having to decide between two awful choices was fascinating, and the writing and character development felt mostly authentic. This version features noticeably improved graphics and performance, though it’s debatable whether that alone is enough to warrant another trip if you’ve already made your way through more than once.

Designed to bridge the 13-month gap between the conclusion of Season One and launch of Season Two, 400 Days offered up five new characters/stories to keep audiences engaged. It was cool at the time, and it’s undeniably well executed, showing the studio’s ability to generate relationships that you care about in short order.

No matter what you do, however, only one of the characters introduced here plays a meaningful role in Season Two with everyone else reduced to cameos — and worse still, the cameos make them unlikable, which kind of stinks after you grew attached to them. So, while it’s a well-made piece of business, it has lost a big part of what made it interesting at launch — that it was new Walking Dead content and created anticipation for the upcoming season.

After controlling Lee as Clem’s defender the first time around, you slip on Clem’s hat for the second season. Her growth from helpless child into a world-weary teen is handled very well as the things she’s seen and done take their toll, making her much darker and cynical. At the same time, the surrounding cast features a good mix of newcomers and returnees, including a very heartwarming reunion.

It devolves a bit in the final episode with a confrontation that felt over the top and forced. Still, it’s easily the series’ second-best season and the only one in which you control Clem.

Although it was released under the TWD banner, Michonne is completely separate from everything else in TellTale’s Walking Dead universe with no crossover. Viewed completely on its own merits it’s solid enough (although the constant flashbacks are a bit irritating), but it suffers from the same lack of drama that plagued Game of Thrones as you knew none of the big characters were in any danger. Minus that shadow of foreboding and sense of “anything can happen,” the format loses some of its punch.

The Walking Dead: A New Frontier

In the most recent season, you control Javi, a disgraced professional baseball player that ends up looking after his brother’s wife and family in the walker-filled world. While he’s a solid protagonist, and his relationship with Kate is interesting, the interactions between him and his brother (when they bump into him) and nephew are wildly inconsistent.

It’s a real problem throughout the season as people are angry and confrontational with you minus story-based justifications. They’re just pissed for the sake of having conflict. Clementine is reduced to a secondary role here, flitting in and out of Javi’s story to limited effect. The ending strongly suggests she’ll be the focal point of the upcoming Final Season.

Despite the presence of a lot of good content, it’s hard to know who The Walking Dead: The Telltale Series Collection is for. If you’ve already played them, the modestly upgraded graphics are unlikely to be enough of a draw for another run. And if you haven’t tried it over the past five-plus years of sales and XB1/PS4 promotions why jump in now at full price?

By HC Green
Tags: Telltale Games, The Walking Dead, The Walking Dead: The Telltale Series Collection, Video Game Review
This entry was posted on Tuesday, January 9th, 2018 at 7:33 pm and is filed under Herija Green, Video Game Reviews. You can follow any responses to this entry through the RSS 2.0 feed. You can skip to the end and leave a response. Pinging is currently not allowed.