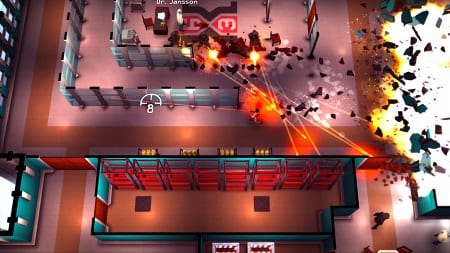 Ah, time travel. Is there any plot device more confusing? And does it even matter when it’s buried within an action-packed twin-stick shooter? Although the answer to both is a resounding “no,” developer 10tons Ltd. mixes the two anyway in its latest action-heavy title, Time Recoil.

There shouldn’t be any trouble acclimating to the game, which does a good job of keeping things streamlined while still adding a unique wrinkle to the festivities. The only thing to remember is your gun is assigned to the right trigger, and your time power (when applicable) is on the left. The UI is well designed, too, making it relatively simple to aim and keep track of your ammo.

What separates Time Recoil from its obvious inspiration Hotline Miami is that when you kill someone, time briefly slows down, giving you an advantage. Once things have slowed you can start chaining your kills together, building up increasingly more powerful special abilities in the process — you get something new every two kills up to eight, at which point time stops completely.

It’s an interesting mechanic, and one that’s put to good use. At first it’s really just about taking down hapless foes as quickly as possible, but as the game progresses the ability to slow time will become a necessity to progression. For example, you may need it to escape the blast radius of a land mine or pass through a door that’s closing too quickly.

Presentation is a weak spot, however, with the game offering little to maintain interest from the audio or visual side. The way things explode or enemies splatter is satisfying to be sure, but it lacks the stylish feel of Hotline Miami, which featured a similarly ugly aesthetic.

As mentioned earlier, Time Recoil does offer up a story about the sinister Mr. Time, who invented a machine capable of manipulating time and used it for nefarious purposes. You play as Alexa, who is somehow able to travel back and forth freely, making her the perfect agent to head to the past to take out Mr. Time before he brings destruction onto the world.

We’re wholly ambivalent about the story, which is told via text balloons and becomes increasingly convoluted as you play through the game’s five chapters and 50-plus levels. Its main function is to give you a central hub to rest before heading out on your next mission, but if you’re able to keep the actual plot straight more power to you.

Levels typically fall under one of three flavours: collect item(s), reach an exit or kill everyone. The last one is the most common, of course, and it’s often necessary to accomplish even when you’re there to gather up intel or pick up explosives.

Early on there’s a semblance of freedom for how you go about accomplishing your goals, but in many of the later levels there’s a more obvious preferred (or required) route. This makes these the most difficult stages and also the most structured. Passing them feels as much like solving a puzzle as playing a shooter as you figure out what order and with what weapon you need to kill your enemies to proceed.

One annoyance in the gameplay is the way you’ll automatically cast aside your pistol for any of the more powerful weapons you come across. That’s fine when it’s a fully loaded shotgun, but when you toss down a handgun with seven rounds for an assault rifle with just one left in the chamber it can be frustrating since the game’s melee strike is woefully imprecise and running out of ammo means almost certain death.

Even with hundreds of failed runs you’ll still finish in less than three hours. After that your options are limited to higher difficulty settings (an interesting concept in a game that already has one-hit deaths) or the ubiquitous time attack in which you can earn stars for speedier runs. It’s fine for what it is, but it’s ultimately just more of the same.

Time Recoil is a quality twin-stick shooter with an interesting time-slowing mechanic grafted on. If you like the genre you’d do well to pick it up and enjoy the abbreviated ride.

By HC Green
Tags: 10tons Ltd., Hotline Miami, Mr. Time, Nintendo Switch, Time Recoil, Video Game Review
This entry was posted on Tuesday, December 19th, 2017 at 4:44 pm and is filed under Herija Green, Video Game Reviews. You can follow any responses to this entry through the RSS 2.0 feed. Both comments and pings are currently closed.