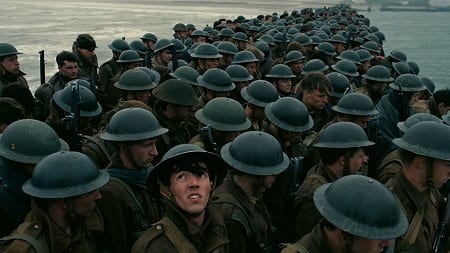 With the Batman trilogy, Inception and Interstellar already under his belt, director Christopher Nolan can pretty much call his shots these days. In that climate it’s impressive that he’s continued to demonstrate patience and a keen eye for his projects, going the better part of three years between Interstellar and his newest venture, Dunkirk.

In 1940, German forces pushed French and British troops into the city of Dunkirk, France, trapping them between the sea and the advancing army. As England tried to get its men back across the English Channel, the Luftwaffe ran frequent operations to bomb both the Allied forces stranded on the bench awaiting extraction and the ships sent to bring them home.

Desperate to get their army back on friendly soil, the British requisitioned the use of small, privately owned craft that could get closer to shore and ferry the men back across the channel. The success of this operation turned a potentially catastrophic defeat into a rallying cry that helped galvanize England’s resolve to fight the Nazis to the bitter end.

Dunkirk approaches the subject by telling three intertwined stories: land, sea and air. On the ground we follow a small group of soldiers and their attempts to get rescued. The sea focuses on a man and his son taking their private boat into the war zone. The air shows a few Spitfire pilots running operations to try to ward off German bombers.

While there’s no central character or hero to focus on, the ensemble performances are very strong, led by Mark Rylance (Bridge of Spies) as Mr. Dawson, who drives his private vessel to Dunkirk, and Nolan favourite Tom Hardy as one of the Spitfire pilots. Tom Glynn-Carney also makes a memorable film debut as Dawson’s son, Peter.

Dunkirk‘s willingness to forego CGI makes for a very grounded experience, and the things they’re able to accomplish with traditional real-world cameras are remarkable. The way events are presented are fascinating as well. One second troops are being bombed and scrambling for cover, and the next they’re back to milling about waiting for rescue. It’s just a different kind of war film, and it’s exceptionally well done.

There’s little we didn’t love about Dunkirk, but the generally anonymous nature of the “land” segments made it a bit difficult to track who was who — not only are the actors deliberately unknown but everyone is young, dark haired and dressed identically. It doesn’t help that the sections are told out of chronological order. While it doesn’t affect the quality of the film, it could create moments of confusion.

There’s nearly two hours of extras, necessitating the inclusion of a second disc. Everything on offer relates to making the film, and there are no extended or deleted scenes. Despite that, the numerous featurettes prove quite interesting, particularly the stuff relating to the aerial sections — again it’s really quite amazing what they’re able to do without using CGI.

There are so many incredible moments in Dunkirk when nary a word is spoken. It was a bold approach from Nolan, and it pays off in a thoroughly unique and engaging film.

By HC Green
Tags: Batman, Blu-ray reviews, Christopher Nolan, Dunkirk, Inception, Movie Review, Tom Hardy
This entry was posted on Monday, December 18th, 2017 at 8:49 pm and is filed under Herija Green, Movie Reviews. You can follow any responses to this entry through the RSS 2.0 feed. Both comments and pings are currently closed.