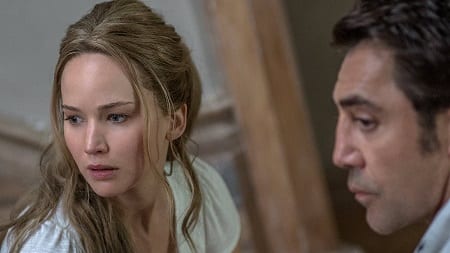 Lawrence’s performance is the highlight of mother!

Director Darren Aronofsky has helmed some interesting work over the years, from Black Swan and The Fountain to Noah and The Wrestler, and from that has stemmed no shortage of controversy on a number of fronts. While perhaps not controversial in the traditional sense, his latest work, mother!, is as bizarre a film as we’ve seen in years, maybe ever, allegory or no.

After his house was burned down, a noted poet (Javier Bardem) finds he’s unable to create. In an effort to help him, his wife (Jennifer Lawrence) sets about rebuilding the home from scratch. The couple live in a secluded area, with no obvious ties outside each other, when one night a stranger (Ed Harris) shows up at their door.

While he initially claims to be a surgeon that stumbled upon them thinking it was a bed and breakfast, the stranger is soon joined by his wife (Michelle Pfeiffer) and then reveals himself to be dying, but a fan of the poet. The poet welcomes their presence in the house, though his wife is suspicious of them and clashes with the stranger’s overbearing wife.

Their quiet life then gets turned completely upside down by the arrival of the couple’s sons, one of which is furious over changes made to their father’s will, resulting in a confrontation. As the poet looks to calm tensions, his wife wants them all to leave and restore her peaceful existence, but the days of peace and quiet are coming to an end.

There are some acting heavyweights anchoring mother!, and their performances are by far the best part of the film. Lawrence does a great job as the lead, with the story told entirely through her perspective, and Pfeiffer is superb as the surgeon’s haughty wife, deftly blending spite, mockery and a healthy dose of clueless to create a truly reprehensible character.

We’ll also hand out points for the cinematography, which keeps a two-hour film that’s set inside a single house from becoming visually boring or repetitive. In fact, the house itself is arguably the second-biggest character in the movie with Lawrence’s ongoing efforts to repair it one of the primary plot strands.

When people talk about the pretentiousness of Hollywood this is the exact type of film they have in mind. The entire thing is littered with subtext about religion, politics, the environment and so on, with that wink and a nod “read into what you will” sort of attitude.

Lawrence herself said mother! was about the “rape” of the planet wherein she’s Earth, Bardem is basically God, Harris and Pfeiffer are Adam and Eve, their children are Cain and Abel and so on. It’s hardly impossible to create those kind of allegories in film — Chronicles of Narnia is clearly about Jesus — but it’s done in jaw dropping fashion here.

It’s already toeing the line during the first “party” scene, when people routinely invade her space and do things no guest would ever do in someone else’s home, but by the time it reaches the finale it turns the WTF factor up to 11 (maybe even 12). You can view it as symbolism if you’d like, but for us it was a bridge too far.

There are just two extras here, led by a 30-minute “making of” feature called The Downward Spiral, which mixes cast interviews with behind the scenes footage. If you want more insight into the film and the creative process associated with it this is worth watching. The other item focuses on the makeup. It’s fine but checks in at less than 10 minutes.

Despite some really strong acting from the principles, mother! is just too “out there” for us, losing its message amid an endless sea of completely nonsensical scenes.

By HC Green
Tags: Black Swan, Blu-ray reviews, Darren Aronofsky, Ed Harris, Javier Bardem, Jennifer Lawrence, mother!, Movie Review
This entry was posted on Wednesday, December 20th, 2017 at 8:51 pm and is filed under Herija Green, Movie Reviews. You can follow any responses to this entry through the RSS 2.0 feed. Both comments and pings are currently closed.