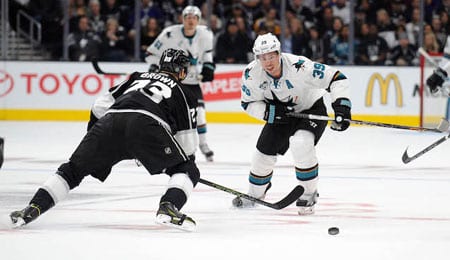 Dustin Brown has come under plenty of fire in recent seasons. (USATSI)

Welcome back to another season of Fantasy hockey, and with it, our weekly waiver wire recommendations column, The Wire Troll. As always, we focus on players widely available in your leagues, so anyone over 50 per cent ownership on ESPN or CBS is not considered. We want to ensure we recommend players that you actually have a chance to acquire.

This week, the Blues are off to a blazing start; Mike Smith is getting it done in Calgary; and Nikolaj Ehlers shook off a scoreless start to his season by going hog wild in Edmonton.

Dustin Brown, RW, Los Angeles Kings (ESPN: 13.3 per cent; CBS: 18 per cent): Brown was a consistent 50 to 60 point producer earlier in his career, but has really struggled to put up that kind of output in the last five years or so. However, he’s off to a blazing start this season, putting up five points over the last two games alone. Brown’s revitalization may not be completely real, but why not grab him and see how long it lasts? Maybe he can continue to surprise the hell out of some goalies (see video below).

Kailer Yamamoto, RW, Edmonton Oilers (ESPN: 2.2 per cent; CBS: 27 per cent): The Oilers’ 2017 first round pick has been given his opportunity in Edmonton, and saw a lot more ice time in his second game. There’s a chance he gets elevated to the top line with Leon Draisaitl (eye) out. Yamamoto had five goals in five preseason games, so it bears watching to see if can take advantage of his extra PT. All owners should consider him if he starts seeing time with Connor McDavid.

Josh Bailey, LW, New York Islanders (ESPN: 18.7 per cent; CBS: 43 per cent): Long-time Islander Bailey is off to somewhat of a slow start, going scoreless in three games and potting a goal and an assist in another. But he’s coming off a career season and could see first-line time if Jordan Eberle’s injury sidelines him for any length of time, so keep your eyes on this situation.

Nail Yakupov, RW, Colorado Avalanche (ESPN: 11.5 per cent; CBS: 28 per cent): Has Yakupov finally found a team for which he can live up to his first overall pick status? After seemingly bottoming out in his last season in Edmonton (.115 Corsi relative QoC, after .481 the season before), he sucked even more in his only season with the Blues, mustering fewer shots than games played. However, Yakupov seems revitalized in the early going with the Avalanche, ripping three goals and an assist in the last two games, and five points in four games overall. Get him on your team while you can, because something tells us he won’t last long on the wire.

Jonas Brodin, D, Minnesota Wild (ESPN: 2.6 per cent; CBS: 10 per cent): Brodin put up a career-best 25 points last season, and while he has yet to get on the scoresheet so far, if he keeps getting nearly 23 and a half minutes of ice time per game as he did Thursday, he’ll be putting up his fair share of points — especially skating with Minny’s high-powered offense.

Cal Clutterbuck, RW, New York Islanders (ESPN: 1 per cent; CBS: 3 per cent): Clutterbuck was expected to return on Saturday from a lower body injury. Need hits in your league? This is your man, and he’ll also beef up your PM while pitching in with some points here and there (five times reaching 20 or more).

Now it’s your turn. Let us know in the comments below who your favourite Fantasy hockey waiver wire pick of the week is…

By RotoRob
Tags: Dustin Brown, Fantasy Hockey, Los Angeles Kings
This entry was posted on Saturday, October 14th, 2017 at 12:56 pm and is filed under HOCKEY, RotoRob, The Wire Troll. You can follow any responses to this entry through the RSS 2.0 feed. Both comments and pings are currently closed.