Warriors Gearing Up for Another Title 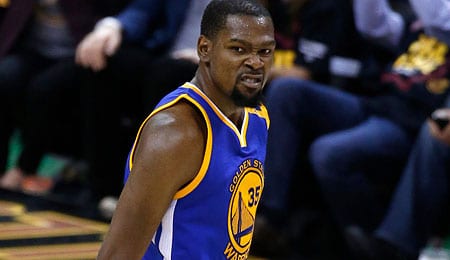 Stephen Curry exploded for 40 points on Sunday to lead the Golden State Warriors over the Minnesota Timberwolves 142-110 to earn a split in their two-game exhibition series in Shanghai, China.

Clearly, the NBA betting lines would not have been projecting such a lopsided victory — even for a team aiming for its third title in four seasons — but performances like Curry’s huge game have become a fairly regular sight since he entered the NBA.

The two-time MVP had to surrender a bit of offense last season with Kevin Durant aboard, but KD’s arrival didn’t exactly decimate Curry’s numbers. Yes, Curry sunk fewer buckets, hoisted fewer treys and even regressed in rebounding, but his showing last season was pretty much in line with the level he set in 2013-14 and 2014-15 before his monster campaign in 2015-16 — an effort that would have been tough to duplicate under normal circumstances.

The Warriors have to be stoked about the shooting and playmaking he’s brought to the team as they gear up for a run at another title, but recent reports suggest that the team wasn’t bullish on giving Curry a max deal.

Although his numbers have dipped ever so marginally the past two seasons, two guard Klay Thompson was also not overly affected by Durant. Thompson actually saw more PT last season, and while his defensive rebounding and blocks were down a smidge, they really aren’t huge parts of his game, so he generally provided very similar value to what he had done the previous two seasons.

Besides, he’s literally swimming in running shoes, so it’s all good. But we have to know if he also bathes in chocolate milk — another product Thompson shills (see video below).

KD, meanwhile, did sacrifice some of his numbers coming to Golden State, but not dramatically so. Yes, his touches were at a career low, but he compensated for that with his best FG percentage yet. What hurt more for Durant was fewer three-ball attempts and a lower success rate from beyond the arc.

Durant, by the way, is having a bit too much fun in China.

Based on year one of the experiment, it’s clear that all three players can get theirs within the system while the team remains successful. Still, is it really possible for the Warriors to duplicate last season’s 49.5 field goal percentage? After all, they finished 20 percentage points ahead of the second place team!

We’re expecting a slight regression there, which should have a slightly negative impact on some of these studs’ numbers. Draft accordingly.

Now it’s your turn. Let us know in the comments below how you think the Big Three will fare this season in Dub City.

By RotoRob
Tags: Golden State Warriors, Kevin Durant
This entry was posted on Monday, October 9th, 2017 at 9:05 pm and is filed under BASKETBALL, RotoRob, Team report. You can follow any responses to this entry through the RSS 2.0 feed. Both comments and pings are currently closed.