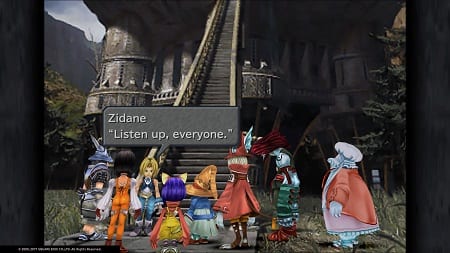 We’re putting the band back together.

For all the love that has been heaped on Final Fantasy VII over the years (and rightfully so), little has been given to its immediate successors on the PlayStation despite the critical acclaim they received at launch. One of those, Final Fantasy IX, is finally getting another day in the sun as the last FF from the original PlayStation era has been re-released on PlayStation 4. Looks like we’re headed back to Gaia…

Turn-based combat with a twist is the name of the game here, and as such it’s hard to mess that up. Each party member will have a box of possible commands pop up when it’s their turn. From there you simply select what you’d like them do (attack, defend, use an item, employ a character-specific ability and so on) and watch it play out.

Those that were introduced to the series through the more recent entries — pretty much anything that was released for the PlayStation 3 or 4 — may find the lack of direct input boring, but the system here allows for a more strategic approach and is more in line with traditional RPGs. For us it was nice to get back to that old-school feel.

Outside of combat you’ll mostly just walk around, look for hidden goodies, solve some simple puzzles and play hands of Tetra Master (FFIX‘s resident mini game). There are no complaints there, though even now we can’t get Vivi to jump rope more than a couple times without falling.

Considered something of a throwback to earlier games in the series when it was released 17 years ago, FFIX definitely shows its age. Character models have clearly been cleaned up, as have the menus and portraits, but the static backgrounds struggle to maintain their beauty. The combination makes it seem as if the action is taking place in front of an old oil painting.

There’s nostalgic value to it for sure, but newcomers that don’t hold any warm fuzzies might find it dated or worse. The FMV sequences, a trademark of FF games during that era, still hold up pretty well considering when it came out. While it can’t compete with modern RPGs visually, there’s enough variety and artistry that you can still appreciate its look.

FFIX is the last mainline Final Fantasy game without voice acting, which is fine by us. Its absence doesn’t affect Square’s ability to tell a story or develop characters. Excellent soundtracks have always been a hallmark of the series, and this is no exception.

Your story begins on the world of Gaia, where a traveling band of performers known as the Tantalus Theater Troupe, including Zidane, head to the city of Alexandria to kidnap Princess Garnet. It’s here that Zidane learns Garnet wants to escape amid misgivings about her mother. As you leave you’ll connect with Vivi, a black mage, and Steiner, a knight tasked with protecting the Princess.

From this core group, the larger story of Final Fantasy IX begins. It’s a sweeping tale complete with global repercussions and plenty of character-driven moments as well. Along the way you’ll be joined by a strong group of party members, including Freya and Amarant (and yes, Quina too), as well as the usual selection of villains, most notably Kuja.

While neither the story nor the characters are held in the same esteem as Cloud and Sephiroth, the game doesn’t lack for quality in either department. FFIX comes from a time when Final Fantasy was the undisputed king of RPGs, and the game’s inherently retro nature should appeal to those that embrace what were staples of the genre.

Like many of Square’s RPGs of the time, FFIX employs the active-time battle system, which is turn-based combat with the caveat that the action meters of both your party members and enemies continue to fill as you select your move. It feels slow relative to modern titles, but if you find you want a truly tactical approach you can switch to “wait mode” in the menu — there the meters freeze while you select.

Under your ATB gauge is the “trance” gauge, which slowly fills and grants access to more powerful abilities once a character slips into their trance. For example, Viva and Eiko can cast two spells per turn, whereas Zidane unlocks “dyne,” which offers up a series of physical attacks based on the number of skills he possesses.

There are also some modern conveniences brought over from the PC version for anyone that wants to use them. You can immediately level up your character to maximum, disable random encounters, make it so all your attacks do 9,999 damage, max out your gil and more. Naturally, they rob the game of any challenge so we’d recommend steering clear unless you’re just in it for the story.

If there is one worthwhile addition it’s high-speed mode, which makes everything move faster, including dialogue, combat and, perhaps most importantly, exploration (walking through the levels does tend to feel rather ponderous). It’s the one “cheat” that doesn’t really affect the experience, and it helps move along what can easily be more than 50 hours of gameplay.

If you grew up on PlayStation-era RPGs, Final Fantasy IX is a delicious bit of nostalgia that holds up quite well. If you’ve never played before and are curious to see the series’ roots, FFIX is a great way to spend your time while you wait for the long-promised Final Fantasy VII remake.