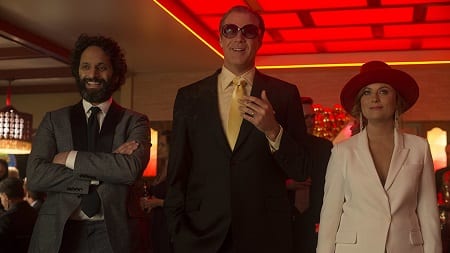 The House is stupid, but it’s also pretty funny.

Although you might associate Will Ferrell and Amy Poehler as being old castmates from Saturday Night Live, the truth is the two of them only worked together briefly with Poehler joining just as Ferrell was leaving the show. It took the better part of two decades, but the pair is finally starring opposite one another in The House.

Married couple Scott (Ferrell) and Kate Johansen (Poehler) reside in a quiet suburban community that for years has set aside money to provide a scholarship for a deserving student. This year, their daughter Alex is expected to be the recipient. When a financial shortfall eliminates the scholarship, however, the Johansens come to the realization that without it they can’t afford to send her to Bucknell.

As they’re dealing with that, Scott’s best friend Frank (Jason Mantzoukas) is going through a divorce and convinces them a trip to Vegas is in order. When a hot run at the dice table ends with everyone losing their money, Frank comes to the realization that the house always wins. As such, the solution to all of their problems is that they should become “the house.”

Despite some misgivings, the Johansens go all in with the idea, hoping to earn enough to send Alex to school. The idea is an overnight success, and the three of them start raking in money hand over fist, but as Scott and Kate embrace their new life, people become more and more suspicious, creating doubt as to whether they can see it through.

Even though Ferrell, Poehler and Mantzoukas dominate the screen time, The House is loaded with actors in small roles that manage to make their mark. Among the standouts are Nick Kroll, who’s perfect as the town’s sleazy councilman, Allison Tolman, who serves as an administrator under Kroll, and Lennon Parham as town busybody Martha.

Much of that absurdity manifests in the more physical comedy bits, highlighted by the fight between Martha (Parham) and Laura (Andrea Savage) over the latter’s failure to bring a dish to the former’s pot luck that is hilariously brutal. Ferrell, channeling the famous scene from Casino in which they break a man’s hand with a hammer, is great as well.

While the film’s fast pace is one of its virtues, it does spend too much time on the relationship between Frank and his estranged wife, and, to a lesser extent, the Johansens and their daughter. We get that she’s the MacGuffin that serves as the impetus to start the casino, but The House is at its best when it’s being abjectly asinine, and the hipster daughter is pretty much its version of a “straight man.”

Plot may not be particularly important in a stupid comedy, but even with that being said, writer/director Andrew Cohen is pushing it. Things are introduced — such as Kroll’s character embezzling money, which is why the scholarship dried up — that never come up again and there’s an obvious lack of coherence. Also, what was the point of having Jeremy Renner show up for like two minutes?

There’s a lot of extra content here… as in there’s a group of extended/deleted scenes that’s basically the same length as the film itself (and includes Alexandra Daddario, who is edited out of the theatrical cut). Beyond that there’s a separate group of deleted scenes, a gag reel and “line-o-rama” in which the actors freestyle their lines in various scenes.

As you might suspect, there’s some funny material that got left out, though whether or not it’s worth investing more than an hour and a half on is debatable since plenty of stuff in there definitely belonged on the cutting room floor, such as Frank’s imaginary friends.

We were pleasantly surprised by The House, a film that offered up utter nonsense for a plot but still managed to provide plenty of laughs with its unapologetically dumb humour.

By HC Green
Tags: Alex Johansen, Amy Poehler, Blu-ray reviews, Kate Johansen, Movie Reviews, Saturday Night Live, Scott Johansen, The House, Will Ferrell
This entry was posted on Sunday, October 8th, 2017 at 10:00 pm and is filed under Herija Green, Movie Reviews. You can follow any responses to this entry through the RSS 2.0 feed. Both comments and pings are currently closed.