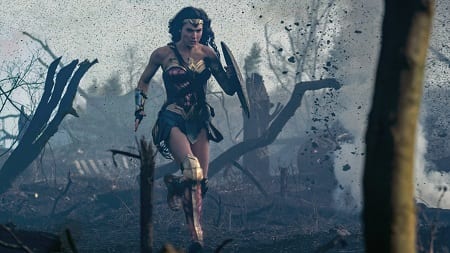 It’s hardly a hot take to suggest WB’s fledgling DC Universe hasn’t been met with as much enthusiasm as its Marvel counterpart. On one side is The Avengers, Iron Man, Thor, Spider-Man and more; while on the other is Batman v. Superman: Dawn of Justice and Suicide Squad. Seeking a true hit, Warner Bros. rolled the dice with director Patty Jenkins on Wonder Woman… and hit the jackpot.

After receiving an old photo from Bruce Wayne (Ben Affleck), Diana (Gal Gadot) reflects on the story behind it, starting with her upbringing on the magical island of Themyscira. Raised as the daughter of Hippolyta (Connie Nielsen) and trained by her aunt Antiope (Robin Wright), Diana is pulled into the world circa 1918 when Steve Trevor (Chris Pine) crash lands on the island.

Diana rescues him and helps fend off a landing of German soldiers, and in the aftermath she decides to accompany Steve to London to find Ares, the God of War, and kill him to end the war. When the British high command shows no interest in Steve’s recommendation of going in — based on evidence of a deadly chemical weapon threat — he and Diana assemble a small team to head to the front before the attack can be carried out.

While Steve remains skeptical of Diana’s belief that Ares is to blame, he recognizes her incredible abilities and is amazed when she frees a town that had been under German control for years by charging through machine gun fire. At odds over whether to kill one man, which Diana believes will end the war, or target a cache of chemical weapons, the allies must find a way to work together to avoid disaster.

Gadot’s portrayal of Wonder Woman is about as refreshing as you can find in the superhero genre. There’s no snark or darkness to her character. Instead, she plays a sense of wonderment and innocence from being raised on an island away from the world’s realities without ever being exploited or made to look maliciously naive. She pulls off the physical elements as well, exuding a magnetic presence that leaps off the screen throughout the film.

Pine is perfectly suited to play opposite Gadot, providing a love interest, a partner, a moral compass and a human perspective to the story’s events. Like Gadot, he offers both physicality and vulnerability that allow you to care about his character. It’s certainly nothing new from Pine, who has done such a good job as Captain Kirk, but his presence is invaluable to the film’s success. Oh, and a shout out to Lucy Davis‘ performance as Etta Candy. So good.

Being set around WWI allows Wonder Woman to headline without the endless crossover that has permeated the Marvel franchise. There are no other superheroes to deal with, no alien invasion and no city-leveling global terrorism — yes, it’s literally a worldwide conflict, but the story itself is more intimate as they’re trying to stop one specific contained threat. It’s just another element that feels refreshing within the genre.

This is an origin story, and Jenkins emphasized the story aspect. Some may be disappointed in the ratio of back story to action, but building characters to care about takes time, and Wonder Woman didn’t have the cache of someone like Wolverine or Batman. It’s a worthwhile investment, and by the end Gadot is the unquestioned star of the current DC Universe.

There’s relatively little we didn’t enjoy, but if we’re picking nits it’s worth noting that some of the CGI looks a bit wonky and artificial. Although it’s usually a moment here or a move there, the biggest overall offenders come in the film’s final confrontation. It just felt like somebody said, “Hey, we need a huge effects-based battle!” It comes across a little formulaic in a movie that bucks plenty of other tropes.

There’s some good stuff among the two or so hours of extras, including a handful of extended or deleted scenes, though the added scene with Etta and Steve’s crew is the star attraction (it feels like the post-credit scene the theatrical release never had). Even the blooper reel, which is serially unfunny in most films, is largely enjoyable thanks to Gadot’s infectious enjoyment.

Beyond that you’re treated to a number of behind-the-scenes goodies with the 20-plus-minute “Finding the Wonder Woman Within” standing out as a really well made piece that chronicles the character and its influence over the years. It’s well worth your time.

There have two exceptional superhero films released in 2017: the first was Logan, the second is Wonder Woman. It does a great job of introducing audiences to this character while ramping up excitement for Justice League; and it makes Gadot a star.

By HC Green
Tags: Batman, Blu-ray reviews, DC Universe, Gal Gadot, Movie Review, WB, Wonder Woman
This entry was posted on Monday, September 18th, 2017 at 4:43 pm and is filed under Movie Reviews. You can follow any responses to this entry through the RSS 2.0 feed. Both comments and pings are currently closed.