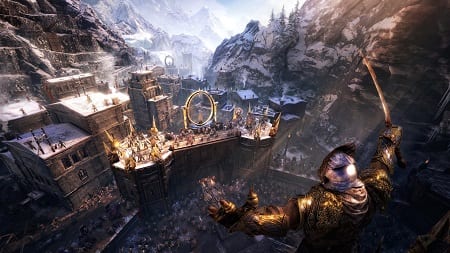 It has been three years since developer Monolith successfully applied the Arkham combat style along with more than a hint of Ubisoft’s juggernaut Assassin’s Creed to create Middle-earth: Shadow of Mordor, probably the best Lord of the Rings game to date. A lot has happened since then, primarily on the console power front, making Shadow of War one of the year’s most anticipated sequels.

While certainly derivative, combat is still tight and satisfying. The game is designed around facing several enemies at once, typically following the pattern of slashing away at one or two and watching for the prompt to appear above the heads of those about to strike. Once that happens you’ll need to quickly tap the corresponding button to counter or evade. Fail and you’ll take damage.

It sounds pretty straightforward, but it can get intense with enough orcs bearing down on you… though whether that’s a good thing or not is debatable. One-on-one fights are rare, and with few exceptions the only way the game can put pressure on you is to try to overwhelm with numbers. It feels like overkill at times, and it made some of our failures feel extremely frustrating.

This is particularly true early on because your only means of recouping health is by draining it from your foes, and unless you approach undetected it’s a rather slow process that leaves you vulnerable. So that means in the midst of battle it’s very difficult to regain health unless you can isolate one enemy from the group. Later on there are skills that help, but those take time to unlock.

There’s more to combat than just those basics, as you’ll have access to executions, wraith moves, blows that stun enemies and a number of meter-based special attacks. Talion also has a bow for ranged strikes at his disposal. It feels precise, and the time-slowing focus ability allows you to use it in the midst of melee combat, which can be used to strategic advantage.

In addition to going right at his enemies, Talion can also sneak around and try to use the element of surprise to take out his adversaries. It’s a pretty forgiving system, perhaps as a concession to how easy it is to not notice a random enemy at his post, and even when spotted, foes are slow enough on the draw that you can often execute them anyway. It works alright as an occasional alternative to fighting.

Peter Jackson‘s vision of Middle-earth is well implemented here, and unsurprisingly Shadow of War represents a significant improvement over its predecessor — a common theme for sequels of games that were forced to straddle the line between the PS3/360 era and the current PS4/One hardware. Action flows smoothly and we rarely encountered any issues with the frame rate, though pop-in from both environments and enemies can occur.

Like many action-heavy titles, it falls victim to lots of repetition with its pre-canned kills and counters, though it’d be difficult not to have that happen with so many encounters. The game’s five zones are diverse and well imagined. Music, sound effects and voice acting are all strong with the principles delivering enough emotion to push the story along.

Following the events of the original, Shadow of War sees Talion, still bound to the spirit of the elf Celebrimbor, travel to Mount Doom to forge a new Ring of Power without Sauron‘s influence to dominate the ring. Celebrimbor is captured by Shelob, however, and held for ransom, forcing Talion to trade the newly created ring for the elf’s freedom.

Shelob offers to help in your fight against Sauron, allowing you glimpses into the future and guiding you to Minas Ithil, the last Gondorian city in Mordor and one currently under siege by the Dark Lord’s forces. Talion and Celebrimbor disagree on how to handle the threat — the ranger wants to help defend the city while the elf believes the city lost and that locating a hidden seeing stone should take precedent — and that creates tension between them.

While it plays fast and loose with J.R.R. Tolkien‘s vision, the story is solid enough, though it feels like it was largely built to facilitate the game’s signature hook that allows Talion to build an army of orcs by confronting and dominating captains scattered across the map. Each one has a unique name and its own set of strengths and weaknesses that can be revealed by interrogating certain foes.

It’s these interactions that allow Shadow of War to zoom past the original by introducing elements of diversity and unpredictability into the game. One captain might be vulnerable to assassination while another can’t be harmed with arrows. They’ll also do things like rally to suddenly press an attack when defeat seems assured or reappear to ambush you after you thought them killed.

Once you unlock the ability to dominate them, the Captains, Warlords, etc., fall in and become part of your army that you can then use to topple fortresses and bring them under your command. Here you’ll breach walls and hold capture points leading up to a challenging showdown with the resident Overlord and his troops to decide the battle’s ultimate victor.

Deposing of high-ranking enemies is also the best way to get that sweet epic and legendary loot, such as swords, bows and armour. It’s a streamlined system that requires only a small amount of attention, and old armour can be broken down into currency with ease. Many of the best weapons will have challenges attached to them as well, allowing you to unlock additional abilities and buffs upon completion.

Middle-earth: Shadow of War does what a good sequel should, it keeps what made the original fun while also adding and improving on its feature list to create a return trip well worth taking.

Gadot’s portrayal of Wonder Woman is about as refreshing as you can find in the superhero genre. There’s no snark or darkness to her character. Instead, she plays a sense of wonderment and innocence from being raised on an island away from the world’s realities without ever being exploited or made to look maliciously naive. She pulls off the physical elements as well, exuding a magnetic presence that leaps off the screen throughout the film.