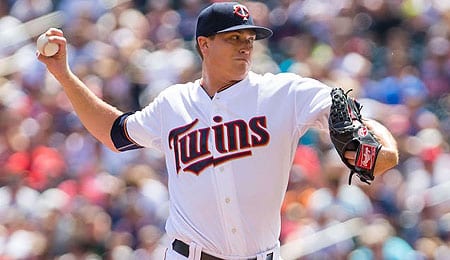 Welcome back to another week of Fantasy baseball. We’re into mid-September now, so you’re either in the midst of your playoffs or turning the last corner of the track on your full-season league. Time to reach a bit deeper to finish this race off!

This week, the Yankees-Rays series that was scheduled for Tropicana Field will be shifted to Citi Field thanks to Hurricane Irma; Clayton Kershaw looked quite human as the Dodgers’ free fall continued; and the Indians’ historic win streak is going to wind up costing a local window company $1.7 million thanks to a promotion the firm ran.

Kyle Gibson, SP, Minnesota Twins (ESPN: 20.8 per cent; CBS: 15 per cent): Gibson has always been fairly durable, making at least 25 starts in four straight seasons, but he’s really gone downhill after showing signs of breaking out in 2015. In fact, he was absolutely rancid in April and May of this season, but since getting shelled on July 9, he’s managed to lower his ERA in each of his last nine starts — not an easy accomplishment. Included in that run is one start which Gibson gave up four earned runs, four of three earned runs, two of two earned runs, one of one earned run, and once he pitched shutout ball (last week vs. KC). What’s really helping is he’s getting strike one (16 first pitch strikes out of 27 batters in his last start; 17 of 22 in the previous outing). That’s always a pitcher’s best friend, so if this continues, Gibson will provide some value down the stretch. Plus, it’s nice to see that drilling Jose Ramirez (see video below) is no longer the only Fantasy impact he’s made this season.

Chad Kuhl, SP, Pittsburgh Pirates (ESPN: 6.9 per cent; CBS: 24 per cent): This young righty is starting to come into his own, hurling seven shutout innings in his most recent start. The Pirates’ ninth rounder in 2013, Kuhl is a sinkerball that knows how to generate plenty of groundballs — although his extreme groundball tendencies have neutralized the further he’s gotten along in the system. The good news is his strikeout rate has soared this year to the point he’s an asset, and he’s managed to shave six-tenths of a run off his ERA since late-July, making him a must-own NL-only league pitcher now.

Richard Urena, SS, Toronto Blue Jays (ESPN: unowned; CBS: 2 per cent): Urena, a young Dominican switch hitting shortstop that’s recently been promoted to Toronto, is getting a chance to play with Josh Donaldson sick. Urena showed a little something something Friday night, delivering his first career multi-hit game including his first career homer and RBI. He didn’t have a great season at Double-A, but was productive enough to earn a look this September. Urena is a nice keeper league option, but he may have a bit of use in very deep AL-only leagues down the stretch as the Jays try to see what they have on their hands here.

Martin Perez, SP, Texas Rangers (ESPN: 13.4 per cent; CBS: 21 per cent): Can you believe Perez is still just 26? He’s teased us for years with periods of excellence, followed by stretches of ineptitude. Right now is a great time to grab Perez, as he’s won seven straight starts and allowed just seven earned runs over his last four outings combined. June and July were ugly months for him, but he was less hittable in winning five times in August and he’s kept on winning this month to reach a new career high in victories. Yes, Perez still loses plenty, too, but right now, he’s a solid add if used judiciously in strong matchups.

Matt Olson, 1B, Oakland Athletics (ESPN: 26.1 per cent; CBS: 25 per cent): One of the A’s top prospects is really starting to live up to the hype, smacking four homers in the last week after a big August in which he hit .305 with seven dingers. Olson really hit well at Triple-A this season and has looked much more ready in this, his second look in the bigs after struggling last year in 11 games. He’s piling up some counting cats that make him a must-own in AL-only leagues and a possible add in deeper mixed leagues.

Hernan Perez, OF, Milwaukee Brewers (ESPN: 7.1 per cent; CBS: 34 per cent): Perez is not having the same kind of year he had last season (at least from a SB perspective), but he’s getting plenty of action, and has been seeing some time at leadoff lately, which could really help his numbers down the stretch.

Gabriel Ynoa, RP, Baltimore Orioles (ESPN: unowned; unowned): Asked to make a spot start against the powerful Indians, Ynoa held his own, so it’s possible he’ll get another chance to start.

Jose Reyes, 3B/2B/SS, New York Mets (ESPN: 33.8 per cent; CBS: 36 per cent): Reyes has had a troubled year, what with the whole domestic violence thing, but he seems to have found himself back with the Mets. He bashed two dingers Friday to improve on a huge September (1000 OPS). The multi-positional eligibility only enhances Reyes’ value.

Brandon Woodruff, SP, Milwaukee Brewers (ESPN: 10 per cent; CBS: 44 per cent): This rookie is rolling through his first four starts, hurling seven superb innings against the Nats the last time, although he had to settle for a no-decision. He retired the last 11 batters in that gem. One of the Brewers’ top prospects, Woodruff is pitching like he never wants to go back to the minors.

By RotoRob
Tags: Citi Field, Fantasy Baseball, Kyle Gibson, Minnesota Twins, New York Yankees, Tampa Bay Rays, Tropicana Field
This entry was posted on Sunday, September 10th, 2017 at 6:04 pm and is filed under BASEBALL, RotoRob, The Wire Troll. You can follow any responses to this entry through the RSS 2.0 feed. Both comments and pings are currently closed.