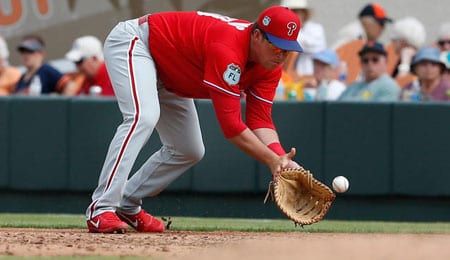 More of Philly’s rebuild has arrived with the promotion of Rhys Hoskins. (CSN Philly)

Welcome back to another week of Fantasy baseball. With mid-August upon us, we are clearly in the home stretch, with just a few weeks left in the campaign. Do not let up now, peeps!

This week, the Marlins are about to be freed from Jeffrey Loria by a group that includes Derek Jeter; Rich Hill got nailed in the throat with a pitch, sending him to hospital; and yet another Yankee hurler has landed on the DL as Masahiro Tanaka is out with a shoulder woe.

Rhys Hoskins, OF, Philadelphia Phillies (ESPN: 14.7 per cent; CBS: 44 per cent): Hoskins had really stepped up his game this season at Triple-A, finally earning a promotion to Philly last week. A top 75 prospect, he was leading the International League in both homers (29) and OPS (966). It took until Sunday for Hoskins to finally get his first career hit (see video below), but the Phils are showing faith, batting him cleanup. Don’t be dissuaded by his sluggish start; this kid will produce, so go ahead and grab him in all formats.

Reynaldo Lopez, SP, Chicago White Sox (ESPN: 18.7 per cent; CBS: 44 per cent): Another just promoted prospect is Lopez, who had some control and long ball issues in his White Sox debut Friday, yet still turned in a quality start. Acquired in the Adam Eaton deal, Lopez has a chance to be a very special pitcher as evidenced by his recent dominating run at Triple-A. This is another prospect that needs to be owned in all formats.

Mikie Mahtook, OF, Detroit Tigers (ESPN: 6.3 per cent; CBS: 9 per cent): Have you noticed how hot Mahtook is right now? All he has done is record seven multi-hit efforts over the last eight games before Sunday. Mahtook is flashing way more extra-base sock this season, and had homered in two straight heading into action Saturday. Ride the hot hand and grab him while he’s raking.

Kevin Kiermaier, OF, Tampa Bay Rays (ESPN: 7.1 per cent; CBS: 31 per cent): Kiermaier (hip) started a rehab assignment Saturday at High-A with an eye towards returning to the bigs next weekend. Out since the beginning of June, he was putting up some solid counting cat numbers, hitting for a decent BA and swiping plenty of bags before he got hurt, so it would behoove you to scoop him up for the homestretch. Just note that his speed numbers may be affected by this injury, so perhaps see if he’s running at all in the minors before making up your mind.

Jerad Eickhoff, SP, Philadelphia Philles (ESPN: 15.1 per cent; CBS: 50 per cent): After establishing himself as a solid starter last year, Eickhoff has generally been a disappointment this season. He’s stayed healthy again, but his ERA has ballooned. However, Eickhoff seems to have turned the corner recently, going 2-0 with a 3.27 ERA in July, while fanning 25 in 22 IP, and continuing that success in his two August starts so far (1-0, 3.55). He looks poised for a strong finish, so pick him up if you need pitching help.

Neil Walker, 2B, Milwaukee Brewers (ESPN: 16.8 per cent; CBS: 48 per cent): Walker was almost dealt across town to the Yankees at the deadline — a deal the Bronx Bombers nixed because they didn’t like his health reports. However, he says he’s healthy and his recent play backs that up, and clearly did not deter the Brewers, who dealt for him on Saturday. Walker ripped four hits (including a big fly) and scored three runs Thursday, then added two more hits, two runs and an RBI Friday. Returning to his old haunts in the NL Central could be just what he needs to rediscover the form he showed last year in a career season. Going from one of the toughest hitters’ parks to one of the best sure won’t hurt, either. We advise an immediate pickup.

Dillon Tate, SP, New York Yankees (ESPN: unowned; CBS: 4 per cent): One of our top 50 prospects in 2016, Tate fell out of our top prospects rankings this season after a rough campaign in which it looked like the fourth overall pick from 2015 was going to be a serious flop. Well, he bounced back in a big way this season, going undefeated at High-A before a recent promotion to Double-A, where he managed a quality start in his debut. Tate is looking like a post-hype bargain in dynasty formats.

Eddie Rosario, OF, Minnesota Twins (ESPN: 15.6 per cent; CBS: 25 per cent): Rosario is really hitting up a storm lately, going oppo for his 15th jack on Friday and then pounding another dinger on Saturday.

Pat Valaika, SS, Colorado Rockies (ESPN: 0.3 per cent; CBS: 1 per cent): If Nolan Arenado (hand) is forced to the sidelines, Valaika will likely take over at the hot corner and the rookie has hit better than he did in his brief look in 2016.

Tyson Ross, SP, Texas Rangers (ESPN: 2.6 per cent; CBS: 14 per cent): Ross came off the DL to earn the win Saturday, even if it wasn’t the tidiest effort. Still, he’s pitched better than he did last year, for what it’s worth, so consider him in AL-only leagues.

Jake Junis, RP, Kansas City Royals (ESPN: 1.6 per cent; CBS: 6 per cent): Junis looked fantastic in his last start, and now that Trevor Cahill (shoulder) is on the DL, he’ll return to the Royals’ rotation and start Monday. Junis had a splendid 2.92 ERA in Triple-A.

By RotoRob
Tags: Philadelphia Phillies, Rhys Hoskins
This entry was posted on Sunday, August 13th, 2017 at 10:17 pm and is filed under BASEBALL, RotoRob, The Wire Troll. You can follow any responses to this entry through the RSS 2.0 feed. Both comments and pings are currently closed.