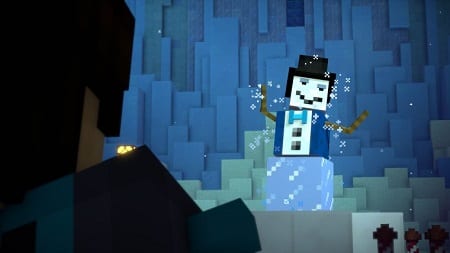 Following a rather plodding debut, Season 2 cranks up the action significantly in Giant Consequences, picking up right where the first one left off as a stone colossus descends on Beacontown spoiling for a fight with Jesse and not the least bit concerned with collateral damage.

Some of the Admin’s motives come into focus here as well: he believes in power above all else. Thus he sees Jesse as a worthy adversary whose friends, specifically the likes of Lukas and Radar, are his weakness.

And naturally, Jesse disagrees, seeing them as his strength. To test that assertion, the Admin sets up a new test for Jesse and company to tackle, threatening the livelihood of Beacontown to coerce their participation.

While it’s only temporary, it’s enjoyable to have everyone together, and it allows the game to start giving more depth to the newcomers. That includes Stella, whose cluelessness continues to serve as a comedic respite from an otherwise serious affair.

Most of the episode is spent trying to successfully navigate the Admin’s house of horrors, consisting of the usual quick-time events — the shooting gallery being the most interesting but also frustrating given how hard it was to separate friend from foe at that distance. Still, the game is so forgiving that even multiple failures don’t derail your progress.

Giant Consequences also feels like it puts more weighty decisions on your plate than the first episode, which is a good thing. We’re particularly intrigued by a late-game choice involving Stella will lead that relationship moving forward. Things end with the deck being reshuffled again, placing Jesse in a new bind to find his way out of.

Coming on the heels of a slow-paced opener, Giant Consequences features better action, more meaningful decisions and an interesting cliffhanger leading into Episode 3.

By HC Green
Tags: Hero in Residence, Minecraft, Minecraft: Story Mode - Season Two, Minecraft: Story Mode - Season Two Episode 2, Mojang, Telltale Games, Video Game Reviews
This entry was posted on Wednesday, August 16th, 2017 at 2:10 am and is filed under Herija Green, Video Game Reviews. You can follow any responses to this entry through the RSS 2.0 feed. Both comments and pings are currently closed.