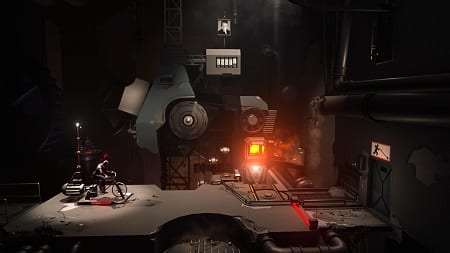 If you get more than five minutes into Black The Fall, the newest release from the Square-Enix Collective and debut effort from developer Sand Sailor Studio, without thinking of Playdead’s Inside, then you’ve either never played the game or have selective amnesia. That doesn’t mean Black The Fall can’t emerge from Inside‘s shadow, but does it? Let’s find out…

With few exceptions, Black is all about solving puzzles rather than precisely timing jumps or quickly avoiding enemies. As such, the controls just need to be competent, and they are. Sprinting and crouching are done with the triggers, while interacting with objects and jumping can be found on the face buttons. It’s easy to learn, makes sense and never trips you up.

Things aren’t quite as clean with the game’s signature gameplay mechanic, the laser pointer. You aim it via the right stick and send a signal with the right shoulder. That’s fine, but the pointer itself tends to move rather ponderously. In addition, there are times when the process feels too exacting, allowing you to click only on one very small spot to relay your order. Although it can be annoying, it never cropped up when speed was of the essence.

While we already touched on the monochromatic elephant in the room, it bears repeating: Black The Fall looks and feels a ton like Inside. The way the game moves, how the world plays out in the background, the lack of definitive context and more — it’s all highly derivative. Full stop.

Now, you can either accept this and move on, or you can get hung up on it and dismiss whatever else the game tries to do because of it. The former is the preferred approach as it does some different things with the world, and it’s successful in creating the type of oppressive vibe it sets out to foster. Yeah, it looks like another game, but Black The Fall is visually arresting in its own right.

There’s very little music here with ambient sounds left to carry most of the audio — there’s even a section in complete darkness in which you have to listen to the sounds of steam pipes advance. Black‘s minimalist approach is yet another nod to Playdead, though it’s effective.

You play as a nameless, faceless protagonist trying to break free from some sort of Soviet work camp, although the presence of sophisticated machinery indicates it’s not meant to be historically accurate. While the hammer and sickle gives the game a little more grounding than what we’ve seen in Limbo, Inside and Little Nightmares, it still offers no concrete narrative.

As with those others you’ll be moving left to right and tackling various environmental puzzles to advance. Some are pretty straightforward whereas others will take a little more thought. Oddly, it felt as though most of the game’s tougher, more involved puzzles happened early on, and the second half had a more segmented feel in which you just run from one self-contained piece to the next.

Most puzzles can be solved with trial and error, and at least with us most of the “aha” moments related to realizing a piece of the background could be climbed or interacted with in some way. The game does a fairly good job of changing them up throughout, largely by adding a robotic companion about halfway through and making most of the puzzles from then on based on its abilities.

Outside of some rewards for exploration in the form of trophies, there’s nothing off the beaten path in Black The Fall to extend the experience or encourage you to return. That could be a problem for some as you should clear the game in a few hours, and once you’ve solved a particular puzzle it shouldn’t trouble you again since only a handful require any kind of precision to complete. A second trip could realistically be done in less than 90 minutes.

Despite some drawbacks (no meaningful story, short run time) and unmistakable similarities, Black The Fall pairs solid puzzles with a strong presentation to create something worth playing.

By HC Green
Tags: Black The Fall, Little Mac, Square Enix, Video Game Review
This entry was posted on Thursday, July 20th, 2017 at 10:09 pm and is filed under Herija Green, Video Game Reviews. You can follow any responses to this entry through the RSS 2.0 feed. Both comments and pings are currently closed.