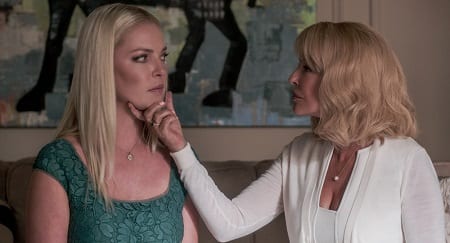 Heigl/Ladd’s relationship is the best part of Unforgettable.

Rewind a decade, and Katherine Heigl appeared poised to ride the success of Knocked Up into Hollywood’s “A” list… and then she criticized the film, alienating Judd Apatow in the process. It’s been more misses than hits ever since, including her falling out with Grey’s Anatomy and two subsequent failed series, with Heigl primarily cast in romantic comedies on the big screen.

Heigl goes an entirely new direction opposite Rosario Dawson in veteran producer turned director Denise Di Novi‘s thriller Unforgettable. Is this the film to get Heigl back on track? Or is it just another one to add to the “miss” column?

Julia Banks (Dawson) has decided to leave behind her job and life in San Francisco to move to a rich area of Southern California and marry David Conover (Geoff Stults), who she has fallen in love with. David has a young daughter named Lily and, to make matters more difficult, an ex-wife, Tessa (Heigl), that remains very much in the picture.

Things start well enough, but Tessa’s demanding nature makes things hard on Julia, and when she learns that her ex-husband plans to marry Julia, Tessa becomes jealous. It begins with undermining and sabotage to make Julia seem unfit, but when it’s obvious that David is committed, Tessa starts to take more extreme measures.

At the centre of Tessa’s plan is the knowledge that Julia was abused by an ex-boyfriend, and her scheme is to lure the ex to Julia’s door by pretending to be her. While Julia begins to see how unhinged Tessa has become, David remains skeptical and tries to mediate for Lily’s benefit. Tessa won’t give up, though, and in the end there’s only room for one of them in David’s life.

Cheryl Ladd is spot on as Tessa’s mother, offering a not-so-subtle look into how Tessa got to be so obsessed with appearance and status. Dawson does a fine job, too, but at some point her character’s decision making becomes poor to the point of frustration, making her tougher to sympathize with.

Unforgettable would’ve benefitted from a strong male character caught in the tug of war between Dawson and Heigl, but Stults is not it. He’s largely devoid of charisma, and he never comes across as the kind of “catch” that would warrant this level of devotion from two such educated and attractive women. He just sort of takes up space and alternates between validating each woman’s concerns.

While a better male lead would’ve helped, the movie is ultimately undone by its paint-by-numbers plot and ponderous execution. You’re likely to think about other, better thrillers frequently as familiar tricks are used with the evil ex constantly one step of the heroine while the husband somehow remains completely oblivious to it all.

There’s a decent confrontation toward the end, but even it is sandwiched by scenes that effectively lay bare the film’s main issues: you aren’t really going to care about the characters because the characters behave in such a way that there’s no connection to them (or from them to reality). It’s impossible to go into more detail minus spoilers, but the final scene is just… ugh.

And, oh, just to be clear, the dude with the microbrewery that’s about to have its big expansion can afford two houses in an ultra exclusive area, luxury cars and an ex that doesn’t work? Even with the little nugget that his previous job was at Merrill Lynch it seems utterly absurd.

A single deleted scene and one featurette comprise the Blu-ray’s extras. The deleted scene is fine but has no real purpose, but “Reclaiming What’s Yours” is worth a watch for the unintentional comedy of Heigl talking about there being “Team Julia” and “Team Tessa,” even though the latter tries to set up the former to be raped/killed/beaten by her abusive ex. Yeah, OK, Team Tessa.

We’re sure we’re not the first ones to write it, but Unforgettable is, in fact, eminently forgettable. If you’re a big fan of Heigl it might be worth your time just for her performance — here’s hoping it’s the start of a new trend for her — but otherwise it’s a mostly dull affair.

By HC Green
Tags: Blu-ray reviews, Denise Di Novi, Grey's Anatomy, Hollywood, Judd Apatow, Julia Banks, Katherine Heigl, Knocked Up, Movie Review, Rosario Dawson, Unforgettable
This entry was posted on Wednesday, July 19th, 2017 at 7:24 pm and is filed under Herija Green, Movie Reviews. You can follow any responses to this entry through the RSS 2.0 feed. Both comments and pings are currently closed.