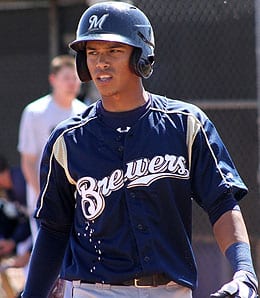 Orlando Arcia is really coming into his own. (Whitefish Bay Tower Times)

Welcome back to another week of Fantasy baseball. Well, we’ve reached the All-Star break, so we’re staring at a very short week. Still, now is a perfect time to raid the wire while your league mates are watching the Home Run Derby or reruns of Murphy’s Law.

This week, Brandon Nimmo suffered a collapsed lung, sending him to the DL for the Mets; Terry Francona (heart) has been released from hospital, and is expected to rejoin the team next weekend; and Greg Bird has shot down reports that questioned his desire to return to the lineup.

Orlando Arcia, SS, Milwaukee Brewers (ESPN: 29.2 per cent; CBS: 48 per cent): Arcia has some mad skills at short (see video below), but more recently his bat is starting to catch up with his glovework. He’s hit safely in seven of the last nine games, flashing a bit of pop along the way. Arcia really started rolling in June, batting .326 with a .370 OBP, but he’s raised the bar so far this month with a 1059 OPS through a week and change. Now nearly 500 at-bats into his MLB career, he’s turned into a much more productive hitter and considering he doesn’t turn 23 until next month, there is plenty of upside here, so this may be the last chance you have to add this kid to your team.

Miguel Montero, C, Toronto Blue Jays (ESPN: 0.5 per cent; CBS: 3 per cent): After being DFAed by the Cubs thanks to calling out Jake Arrieta, Montero has only managed a walk and a run in his first two games as a Jay, but it’s rare for catchers to switch leagues mid-season, so he instantly becomes a viable AL-only option as a second catcher. He’s going to get his chances in Toronto, and would become more interesting if he moves up from the seventh slot in the order. Now let’s see if Montero can keep his opinions to himself.

Luke Gregerson, RP, Houston Astros (ESPN: 2.7 per cent; CBS: 5 per cent): Gregerson was Houston’s closer for a good chunk of 2016, ultimately losing the job to Ken Giles. This year, it was Giles who struggled early, but Gregerson was even uglier, missing his chance to reclaim the gig. However, Gregerson is on a roll now, hurling nine straight scoreless appearances and recording a 1.54 ERA with a .186 BAA in June. Look for a big second half from the veteran, featuring plenty of holds if you’re chasing that stat.

Ji-Man Choi, 1B, New York Yankees (ESPN: 1.1 per cent; CBS: 2 per cent): Since being recalled to the Yanks, Choi has shown power (more than expected) and patience — two things that will keep him in the bigs. He will need to make better contact, and bear in mind the Yanks are shopping for first base help, so his long-term status is up in the air. For now, why not roll the dice and see how it plays out?

Raimel Tapia, OF, Colorado Rockies (ESPN: 6.3 per cent; CBS: 16 per cent): Suddenly, Carlos Gonzalez is sitting against lefties, providing more PT to budding young star Tapia, who is hot. Tapia is seeing more action in the bigs this year, and he’s been piling up the runs when he gets a chance to play. We are witnessing a changing of the guard in Colorado.

Luke Weaver, SP, St. Louis Cardinals (ESPN: 3.2 per cent; CBS: 18 per cent): As we discussed in the past, the Cards have had great success in recent seasons in bringing young starters to the bigs and starting them out in relief roles. Weaver has shown significantly better control at Triple-A this season, and is the kind of pitcher that could be capable of some major Ks pitching out of the pen. Even if he’s simply up to be showcased for a possible trade, you may as well take advantage of him while you can.

Jeurys Familia, RP, New York Mets (ESPN: 17.6 per cent; CBS: 39 per cent): Familia (shoulder) is making progress, and should be ready to return to action in about five weeks, so go ahead and stash him if you need saves down the stretch. Early on this year, he wasn’t inducing as many groundballs as usual, but the line drive rate was down also, so the news wasn’t all bad.

Lonnie Chisenhall, OF, Cleveland Indians (ESPN: 25.2 per cent; 31 per cent): The maddeningly frustrating Chisenhall seems to have finally found a role in which he can deliver consistent performance, and even as a part-timer he looks headed towards a career year.

Brad Boxberger, RP, Tampa Bay Rays (ESPN: 2.8 per cent; CBS: 6 per cent): Alex Colome hit a real rough patch about a month ago and hasn’t fully come out of it yet. Meanwhile, Boxberger (back) is finally healthy, getting used more often, and looking fantastic. Could there be a new man earning saves in Tampa Bay soon?

Yuli Gurriel, 1B/3B, Houston Astros (ESPN: 48.2 per cent; CBS: 48 per cent): Gurriel is living up to his reputation as a productive hitter, recently driving in 10 runs in a three-game span. Is there a player on Houston that isn’t red hot?

By RotoRob
Tags: Fantasy Baseball, Milwaukee Brewers, MLB All-Star Game, Orlando Arcia
This entry was posted on Sunday, July 9th, 2017 at 6:44 pm and is filed under BASEBALL, RotoRob, The Wire Troll. You can follow any responses to this entry through the RSS 2.0 feed. Both comments and pings are currently closed.