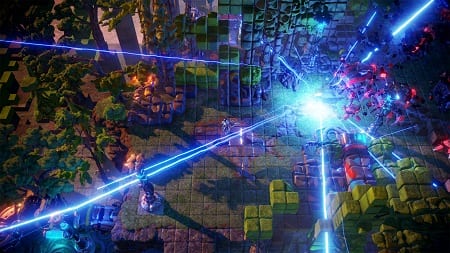 With titles like Outland, Dead Nation and Alienation on its résumé, developer Housemarque has proven to be a consistent producer of high quality arcade action. Its latest entrant is Nex Machina, a twin-stick shooter that hearkens back to the coin-op days of gaming while adding modern accoutrements.

Faced with screens filled with enemies, projectiles and detailed environments, most of which explode into neon showers of voxel-style pixel blocks, the last thing you need to worry about are the controls. On that front, Housemarque has you covered. It uses a tried-and-true twin-stick setup for the basics and offers only two additional options: dash and special weapon.

Dashing is crucial to success on all but the lowest difficulty levels, and you’ll have the opportunity to grab power-ups that add the ability to string three dashes together without a cooldown or one that tacks on explosive damage. A small meter appears above your character’s head when you dash, which acts as the timer, but amid the chaos you’ll need to rely on feel, which may take a few runs.

There are six special weapons: rocket, laser, power shot, smart bomb, detonator and sword. Each has its own strengths and weaknesses — except the sword, which has no redeeming value. The laser is great for taking down packs but too slow and weak to be effective against bosses. The detonator both absorbs projectiles and deals damage, but its range is suspect, and so on.

It’s worth noting that you can only use the ability you picked up most recently, there’s no toggling between them, and that means power-up drops can be unwelcome if you accidentally grab the triple dash when you wanted to continue causing damage with explosive dash, or scoop up the sword headed into a boss fight when you were counting on the smart bomb’s defensive capabilities.

Put bluntly, Nex Machina is an all-out assault on your senses with a pumping soundtrack and an array of spectacular colours and explosions. There isn’t a ton of variety in the enemies, and each level is broken down into restrictive bite-size arenas before warping to the next, but everything about it feels intense. There were definitely moments when it felt a little overwhelming, particularly on higher difficulties, but it never dissuaded return trips.

If you demand dozens of hours of fresh content in your games, Nex Machina likely isn’t for you. There are only six stages (five on the lowest difficulty) along with a “true boss” that can only be accessed if you finish without continuing. It’ll take less than an hour to clear it the first time, and as you improve you can speed run levels considerably faster.

Balancing dodging and unleashing waves of weapon fire are twin-stick staples but rarely has it been done more expertly than here. Each failure is a lesson, providing information for you to process as to how to proceed: which direction to strafe, which enemies to prioritize, when to dash, what special weapon would work best, and so on.

Each time you inch forward on the harder settings feels like a triumph, and as you gain confidence in simply advancing you can turn your focus to maximizing your score. As noted, levels are broken into small sections that must be cleared of enemies to progress, and within those lay all manner of optional objectives like rescuing humans, destroying special foes and finding secret exits.

Critical among them is collecting humans before they’re killed. Each time you save someone it raises your multiplier… provided you save someone else before the meter runs out. That means skilled players will let the meter nearly expire before grabbing another person, keeping it building as long as they can. It’s an overlooked layer to chasing high scores.

Local co-op is available and worth exploring if you have someone that’s interested in sinking some time into the game, though adding a casual partner isn’t all that enticing. There’s also a series of leaderboard-based challenges that offer variants on existing levels. It’s a decent secondary offering.

As good as Nex Machina is, there are definitely moments of exasperation when you invariably catch a stray projectile and are killed. The game punishes you by stripping away elements of your arsenal, such as upgraded range or spread in your primary weapon, or outright removing your secondary weapon.

Now, since you’re more likely to die the further along you go, losing your upgrades hurts much more, and it can lead to deaths stacking up. If you lose to the point of using a “continue” you’re reverted back to your original state, which on certain stages (e.g., boss battles) can make progressing beyond that point extremely difficult.

It just seems counterintuitive to offer the ability to continue but then make the road forward harder from a point that’s obviously tripped you up. We know, we know… git gud.

If you’re looking for a fine-tuned challenging experience, Nex Machina fits the bill. It’s a fantastic twin-stick shooter and one of our favourite titles thus far in 2017.

By HC Green
Tags: Housemarque, Nex Machina, Outland, Video Game Review
This entry was posted on Monday, June 26th, 2017 at 10:07 pm and is filed under Herija Green, Video Game Reviews. You can follow any responses to this entry through the RSS 2.0 feed. Both comments and pings are currently closed.