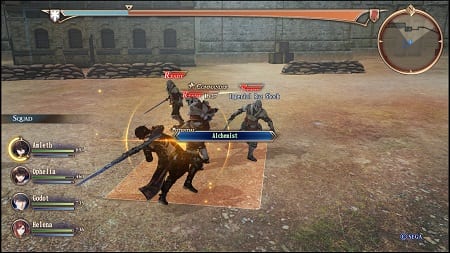 The Valkyria series has achieved a cult following since its initial PS3 debut thanks to a stylish steampunk world, quirky characters and brilliant strategic combat. The new Valkyria Revolution hopes to add a new spin with action RPG elements, but the new combat scheme is just part of the disappointment.

In theory, there’s a lot to like with Valkyria Revolution’s control scheme. The basic premise is that the original turn-based strategy of the Valkyria series has now gone into action-RPG mode — think Final Fantasy XV.

During encounters, movement and defense (running while blocking, dodging) are in real time. There’s an element of cover-based defense and stealth as well, though switching in and out of cover tends to be problematic.

Melee strikes with your gigantic anime-style weapons are also in real time. However, once you want to use any kind of projectile or magic, the game freezes and lets you choose how to attack or heal or tell your teammates to execute your commands.

The “in theory” part breaks down when actually played out, because corner collision, cover detection and camera angles get in the way. In some cases, there’s an adrenaline rush to running up to an enemy, attacking with a sword and then getting in position for a strategic magic attack. But then you’ll get caught on a corner or unable to see the enemies above you and it becomes an exercise in frustration.

In an era of graphics pushing new boundaries, Valkyria Revolution doesn’t just seem like a step back — it feels like a time warp back to the PS2 era. While the resolution is obviously HD and a lot of the colours are vibrant and unique, the overall models seem more comparable to the best visuals of that era (e.g., Metal Gear Solid 3, God of War 2) rather than a cutting-edge PS4 title — or even the original Valkyria Chronicles on PS3.

No one’s expecting this franchise to rival, say, Uncharted 4, but it’s almost shocking how much jagged edges stick out of models or animation is clunky. The character designs are nice, particularly the mechs, which seem reminiscent of 1980s Transformers toys, but with so many cut scenes (more on that later), it becomes clear very quickly that the graphics are well below par.

The voice acting follows suit. It’s not helped by a pretty lackluster script filled with anime clichés, but the performances are all over the map — some woefully over the top and some just feeling remarkably out of place. This is a far cry from the original Valkyria game, which had its anime-esque quirks but felt much more organic and charming.

When Valkyria Revolution’s new action RPG scheme works, it really sings. The combination of real-time and tactical makes for exciting combat, and new elements such as stealth and fear/surprise buffs on enemies bring an experience that, while different from the turn-base strategy of the series, is still fun despite the control issues mentioned above.

Players maneuver based on a Ready meter, whereby each action takes up the bar and a visual indicator allows you to attack again (melee or projectile/magic). This ensures the game never devolves into pure hack n’ slash and generally achieves its desired balance.

Party selection creates buff effects based on individual skills/problems (natural sniper, allergic to grass, and so on) as well as pairing and groups, allowing for a strategic sense of how to maximize an encounter.

What drags it down? Level design is hit and miss, camera angles prove to be a detriment, and boss battles simply don’t work a lot of the time due to clunky movement and wonky hit detection. Even still, sometimes a great story can overcome uneven gameplay, and this is where Valkyria Revolution truly takes a tumble.

The original World War II-inspired tale was charming, goofy and ridiculous in its eccentricity. In Valkyria Revolution, you still have the same heavy themes of war as the country of Jutland experiences a revolution, but it’s played out with lifeless characters who are caricatures of tropes, from Amleth (brooding hero mourning his lady) to the supporting cast of heroes and villains.

That you’re stuck with a lot of cut scenes makes matters worse — Metal Gear-esque in volume and length but without any of the spy intrigue, good acting, or stylish direction. Instead, it’s basically characters standing or sitting around moving their mouths as they overexplain the situation to the point of tedium.

In fact, the first hour or so of prologue spends at least half of it in expository cut scenes, and had we not been writing a review, we would have skipped them and read a summary later.

What could have been an interesting new take on the Valkyria series lumbers into disappointment with unpolished real-time combat, poor presentation and a cast of unlikeable characters. Valkyria Revolution takes all of the best parts of the original game and, unfortunately, heads in the exact opposite direction.

By Mike Chen
Tags: SEGA, Valkyria Revolution, Video Game Review
This entry was posted on Wednesday, June 28th, 2017 at 7:51 pm and is filed under Mike Chen, Video Game Reviews. You can follow any responses to this entry through the RSS 2.0 feed. You can skip to the end and leave a response. Pinging is currently not allowed.