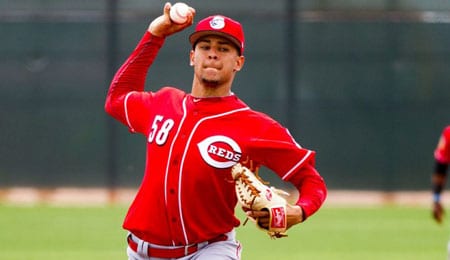 Welcome back to another week of Fantasy baseball. Most teams will reach the 81-game mark this week, meaning we are now halfway through the season, regardless of what the All-Star Game suggests. So if you’re in the running still, congrats. Keep it up, my peeps!

This week, the Red Sox added some veteran depth by claiming Doug Fister off waiver while signing Jhonny Peralta to a minor league deal; the Tigers grew tired of Francisco Rodriguez’s suckitude and released him; and Freddie Freeman (wrist) is recovering quicker than expected, so he should be back early next month.

Luis Castillo, SP, Cincinnati Reds (ESPN: 1.8 per cent; CBS: 9 per cent): Recently recalled to provide a boost to the beleaguered Reds’ rotation, Castillo may only be up on a short-term basis, but he comported himself very well in his debut, notwithstanding some command issues. He trended more into a groundball pitcher at Double-A and his xFIP pretty much supported his excellent bottom line numbers. Whether Castillo sticks around or not (the Reds have reinforcements coming off the DL), he’s a superb Dynasty league option, especially given his K rate (see video below to get a sense of his swing and miss stuff).

Hunter Greene, SP/SS, Cincinnati Reds (ESPN: NA; CBS: 3 per cent): The No. 2 overall pick in the draft, two-way star Greene is most likely to wind up as a pitcher, but first he’ll need to sign. A fantastic Dynasty option, he is waiting to see how much Brendan McKay gets because Greene is determined to be the highest paid player in the draft. No ego problems here, clearly. Could the California high school prospect get fed up and opt to head to UCLA? It’s doubtful, but would be a fascinating development.

Franklin Barreto, SS, Oakland Athletics (ESPN: 2.2 per cent; CBS: 23 per cent): The former Blue Jay farmhand (traded to Oakland in the Josh Donaldson deal) has been recalled by the A’s. Barreto has stayed fairly healthy in his pro career, other than missing most of the second half in 2015. Ideally, we’d like to see him develop his batting eye further before getting exposed to MLB pitching, but the A’s see things differently and are throwing him into the fire. Just 21, Barreto has benefited from some very high BABIPs since reaching Triple-A last year. We think he’ll hit in time, but be patient as he takes his rookie lumps (notwithstanding a dinger in his debut, that is!). Expect Oakland’s top prospect to man shortstop until Marcus Semien returns in a week or so.

Homer Bailey, SP, Cincinnati Reds (ESPN: 5.9 per cent; CBS: 14 per cent): We guess this is the Cincy starter edition of the Wire Troll. Bailey has just been activated off the DL after missing most of the first half in the wake of offseason elbow surgery. Bailey looked dynamite in his rehab stint, winning all three of his starts, while fanning 17 and walking just three in 16 2/3 IP. If you need pitching help, it’s definitely worth picking him to see how he fares now that he’s finally healthy. Sure, Bailey was terrible in his debut, but give him some time to shake off the rust.

Henderson Alvarez, SP, Free agent (ESPN: unowned; CBS: unowned): Three years ago, Alvarez was just 24 and in the midst of a breakout season in which he recorded a 2.65 ERA en route to earning Cy Young consideration. The following year, he made just four starts and shoulder woes have kept him sidelined since. Well, he’s healthy now, putting on a showcase for MLB teams this weekend as he aims to get a chance to make a comeback. Given his still tender age, pedigree and tremendous control, Alvarez is worth tracking as we see how this plays out. Who knows? This Venezuelan could be a surprise source of value in the second half given how many teams need pitching help.

Martin Maldonado, C, Los Angeles Angels (ESPN: 4.5 per cent; CBS: 13 per cent): After his triple Friday, Maldonado is now batting .368 with five RBI over the last week. On Wednesday, he pretty much was the Angel offense. Maldonado’s slugging has improved each month so far this season as he’s reached double digits in doubles for the first time. If he could get his walk rate back near where it was last year, we’d really be on to something here. Dealt to the Angels last winter as part of the Jett Bandy trade, Maldonado has delivered more offense than expected.

Randall Delgado, RP, Arizona Diamondbacks (ESPN: 9 per cent; CBS: 8 per cent): This Panama-born veteran seems like he’s been around forever, yet is still just 27 and now he’s getting another chance to start for the Diamondbacks. Maybe it’s just a spot start, but see what happens.

Blake Parker, RP, Los Angeles Angels (ESPN: 3.2 per cent; CBS: 5 per cent): This veteran has proved he can close at the Triple-A level. Now he’s worked his way into the mix for saves for the Angels.

Stephen Vogt, C, Milwaukee Brewers (ESPN: 7.5 per cent; CBS: 23 per cent): Many were upset when the A’s DFAed Vogt, but he landed on his feet in a place where he has a chance to turn things around and offer value.

Scott Heineman, OF, Texas Rangers (ESPN: NA; CBS: unowned): Heineman is absolutely on fire at Double-A right now, and looks just about ready for a promotion. He recently reached base 14 times in a stretch of 21 plate appearances.

Austin Bibens-Dirkx, SP, Texas Rangers (ESPN: 2.1 per cent; CBS: 5 per cent): If you can live with his inconsistencies, Bibens-Dirkx will reward you with periodical brilliance, and hey, in looking at this minor league veteran’s overall numbers there’s nothing wrong with his WHIP of 1.01.

By RotoRob
Tags: Cincinnati Reds, Fantasy Baseball, Luis Castillo
This entry was posted on Sunday, June 25th, 2017 at 5:10 pm and is filed under BASEBALL, RotoRob, The Wire Troll. You can follow any responses to this entry through the RSS 2.0 feed. Both comments and pings are currently closed.