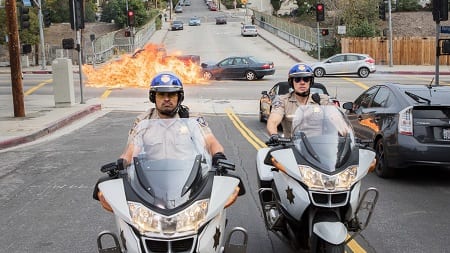 That truck blowed up real good.

There has been no shortage of loose remakes of old television shows into modern movies: 21 Jump Street, The Brady Bunch, Starsky and Hutch, Dukes of Hazzard and so on. Next up to feed at the trough is CHiPs, a buddy comedy/action film based on the late-’70s, early-’80s show of the same name — though how much it shares with its namesake other than motorcycles is up for debate.

Following an armoured car robbery that points to the involvement of members of the California Highway Patrol, the FBI sends an agent undercover as Frank “Ponch” Poncherello (Michael Pena) to investigate from the inside while his estranged partner handles its public face. Ponch is partnered with onetime motorcycle riding champion turned aged rookie officer Jon Baker (Dax Shepard).

Their partnership gets off to a rocky start with Ponch attempting to look into the robberies without tipping anyone off and Baker, who’s in a probationary period, trying to write up as many tickets as possible. While Ponch initially views Baker as a complete liability, the rookie begins to slowly alter that perception through some astute observations that benefit the case.

As Ponch and Baker start to progress, Lt. Ray Kurtz (Vincent D’Onofrio) is coordinating more jobs as he tries to stash enough money so that he and his crew, most notably his junkie son, can leave the country and retire. Despite some suspicions about Kurtz, Ponch and Baker need to find the proof before he skips town and leaves them high and dry.

There are plenty of cool chase sequences for those that enjoy vehicular action. It’s not Fury Road to be sure, but CHiPs deserves credit for sticking to practical effects and shying away from green screen when piecing together some excellent motorcycle stunts. Jane Kaczmarek, Maya Rudolph and Erik Estrada pop in for fun cameos.

We’re not sure who decided to green light Shepard as the writer, director and co-star of the movie, but watching the way the film unravels confirms it was a poor choice. Shepard is mostly annoying on screen — he’s joined by wife Kristen Bell, who’s wholly unlikeable and barely present but then somehow becomes a focal point of the finale — and he seemed determined to have as many scenes with his shirt off as possible (yeah, we get it, you’re ripped).

His acting is actually the lesser of two evils. Better pacing and better writing could’ve minimized his performance, but those things are missing in spades. It’s largely passable for the first three quarters or so, but then it comes apart at the seams to a startling degree. The final shootout feels archaic, sloppy and oddly plodding, and the attempted mix of violence and comedy at the end just doesn’t work.

There are some “making of” extras, two of which focus on the bikes and stunts, and the other informs you that while Dax loved the original show, the movie has almost nothing to do with it. There’s a handful of deleted scenes as well, most of which feature D’Onofrio and offer a little more depth to his character, though we didn’t feel anything there really belonged in the film.

It’s obvious what Shepard was aiming for with CHiPs, but like the character he portrays, Dax missed the target. While Pena is good and there are funny moments, the film ends up being a mess.

By HC Green
Tags: 21 Jump Street, Blu-ray reviews, CHiPs, Dak Shepard, Michael Pena, Movie Review
This entry was posted on Friday, June 23rd, 2017 at 9:53 pm and is filed under Herija Green, Movie Reviews. You can follow any responses to this entry through the RSS 2.0 feed. Both comments and pings are currently closed.