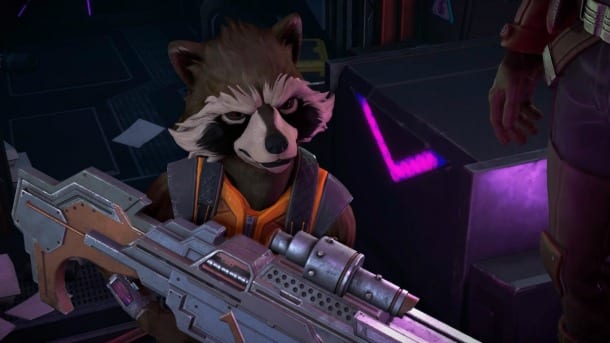 Rocket’s backstory is explored in Under Pressure.

Episode 2: Under Pressure offers fewer big moments than the series debut, but it digs deeper into character moments. It also presents major choices that force you to align with characters — basically it’s Rocket versus Gamora.

This played out a little bit in the first episode but is highlighted even more here, and the nice thing about the way choices are presented in Guardians as opposed to, say, The Walking Dead, is that it’s not two horrible choices battling each other.

Instead, it’s often the logical choice placed against the heartwarming choice, and both have their own share of character and plot consequences. Technically, this seems to generate the occasional hiccup, as characters will respond or end conversations in ways that seem out of step with the choices you make.

At the same time, it inserts clunky on-rails shooting during a few spaceship events. These are brief but inaccurate, and while they’re probably meant to add excitement, they’re not visually exciting or engaging enough to do much other than take you out of the moment.

Guardians of the Galaxy’s second episode, Under Pressure, focuses more on character than action, and while quieter than its predecessor, its endearing characters and snappy dialogue carry through an entertaining 2-to-3 hour experience.