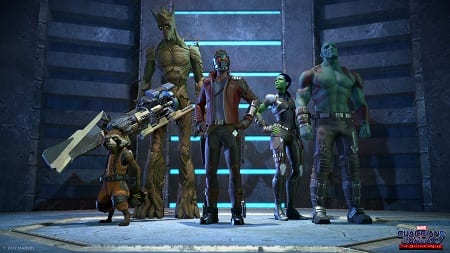 TellTale’s take on GotG perfectly matches the tone of the popular film.

This version, starting with Episode 1: Tangled Up in Blue, captures everything that worked so well with the film and instantly feels fresher and livelier than other recent fare (The Walking Dead, Batman).

If you’ve played a TellTale game, then you know the controls for Guardians of the Galaxy. There’s nothing terribly unique about it outside of using up and down directional pad buttons to move vertically with Star Lord’s rocket boots. In addition, L2 activates radio communication with teammates. Other than that, it’s standard TellTale quick-time events.

TellTale’s episodic games are often style over graphical substance — there’s usually not too much when it comes to the complexity of the models or animation, and instead, they are highly stylized to look like comic books come to life.

Guardians of the Galaxy offers a slightly more realistic look, more in line with the popular Star Wars: The Clone Wars TV show. Perhaps it’s because it doesn’t use cel-shading, but Guardians is probably the best looking Telltale game, or at least the highest fidelity when it comes to textures and lighting.

TellTale usually employs strong vocal performances, and there’s no doubt about that here. The Guardians cast is slightly different from the popular film cast. For example, Star Lord is played by Scott Porter, but he sounds more like Nolan North’s Nathan Drake than Chris Pratt
(ironically, North plays Rocket Raccoon).

While the cast doesn’t necessarily replicate the film experience, they fit the characters perfectly, and any sort of disbelief left by that discrepancy is quickly forgotten.

Outside of that, the same pros and cons come with TellTale fare. Thus, the strength of Guardians depends on the story and the characters. TellTale is increasingly removing true gameplay elements (there are only three real segments of interaction and exploration in Episode 1) and, at the same time, it feels like there’s little of consequence outside of one major decision. Otherwise, it feels like dialogue choices are only going to affect the immediate conversation, not the bigger picture.

This is a criticism, but it’s balanced out by a strong story and even better dialogue. The story and characters unfold in a way that someone can be completely new to the franchise and will still be caught up to speed really quick.

The exposition isn’t as painful as it can be, and all of the humour — there’s a lot of that — fits in with what you’ve come to expect. There are even a few trademark 1970s/’80s rock songs (and Indie cred for getting punk band The Buzzcocks in there).

So, while Guardians doesn’t break any new ground, it’s engaging and fun in a way that welcomes new and old fans of the franchise. For people who’ve never heard of the series but like TellTale, the humour is right on par with the excellent Tales from the Borderlands series.

While not breaking the TellTale formula for better or worse, TellTale’s take on Guardians of the Galaxy is fun, engaging and smartly comic with endearing characters. As long as you’re not expecting anything too different, you’ll be extremely satisfied with the start of this new series.