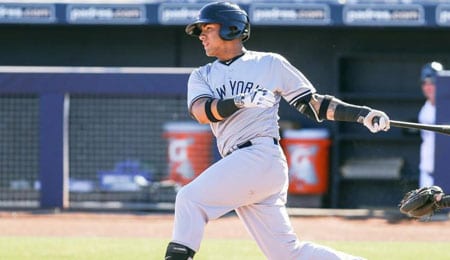 Welcome back to another week of Fantasy baseball. Mid-June has arrived, which means we’re about to launch into the 2017 MLB Draft. Dynasty league owners, pay attention! For those seeking more immediate prospect help, we’ve got plenty this week.

This week, Washington and Baltimore got into a war of words — about the weather; Addison Russell, accused of domestic violence, was back in the lineup for the Cubs on Saturday; and Cameron Maybin did something no ALer had done since 2013 — swipe four bags in one game.

Gleyber Torres, SS, New York Yankees (ESPN: 5.3 per cent; CBS: 42 per cent): Whatever struggles Torres had adjusting to Triple-A seem behind him now as he’s hit safely in four of his last five games, with three multi-hit efforts and his first homer at the level (see video below). He was racking up the total bases at Double-A, earning a quick promotion to Triple-A, where he’s accumulated 55 at-bats. Given that it took Torres all of 121 Double-A at-bats to move on in the system, it wouldn’t be a shock if the Yanks are ready to give him his first taste of the majors very soon. This is a player you want for the second half, so grab him now.

Carson Fulmer, SP, Chicago White Sox (ESPN: 0.9 per cent; CBS: 9 per cent): As we enter the time of the year when prospects begin to get called up, it’s time once again to consider Fulmer. The eighth overall pick in 2015 has great strikeout potential, averaging nearly 8.5 Ks per nine over his minor league career, although that number has dipped this season. Fulmer ended May on a rough note, but has really come on so far this month. His overall ERA is still less than impressive, mostly because of some long ball issues, but he’s kept the ball in the yard in his last two starts. Fulmer will definitely get another look with the Pale Hose in the not too distant future.

Lucas Giolito, SP, Chicago White Sox (ESPN: 2.6 per cent; CBS: 28 per cent): Another White Sox farmhand that will soon be ready for another crack in the bigs is Giolito, although he sure endured his struggles earlier this season. After a rough first start in May, however, he’s been on a major roll at Triple-A. The hype train had really followed Giolito around in his early days as a pro, and while he’s occasionally disappointed at the higher levels, we suspect he’s very close to becoming a big league rotation fixture.

Mallex Smith, OF, Tampa Bay Rays (ESPN: 4.4 per cent ; CBS: 15 per cent): With Kevin Kiermaier (hip) out for the next two months, Smith has been recalled from Triple-A and thrust in the Rays’ lineup. Smith’s made an immediate impact, going 5-for-11 with four runs, a homer, three RBI, a walk and four steals in three games. This dude has wheels, having swiped 16 bags in 32 games at Triple-A, and now the Padres’ 2012 fifth rounder is showing off what he can do at the big league level. Grab him now.

Sean Newcomb, SP, Atlanta Braves (ESPN: 6.2 per cent; CBS: 23 per cent): The Braves lost his MLB debut Saturday, but don’t blame Newcomb — he was spectacular. In 6 1/3 IP, he limited the Mets to four hits and one unearned run, fanning seven and walking two, before the bullpen turned it into a blowout. Newcomb’s hit rates at Triple-A were fantastic, and his arrival in the majors is yet another step in the Atlanta rebuild and considering he had the second highest strikeout rate in the International League, he has a real chance to be a nice source of Ks right from the get-go.

Lewis Brinson, OF, Milwaukee Brewers (ESPN: 8.8 per cent; CBS: 38 per cent): Are you sensing a prospect related theme around this week’s column? Brinson was just recalled Saturday and he’ll likely make his MLB debut Sunday. Milwaukee’s top prospect has enough Triple-A experience under his belt that this stay could very well be permanent. Brinson has a chance to be a very productive big leaguer, so if you need an offensive boost, give him a look.

Grant Holmes, SP, Oakland Athletics (ESPN: unowned; CBS: 3 per cent): Holmes has mostly struggled with the move to Double-A this year, but sure looks good now, having won three of his last four starts, most recently pitching a no-hitter into the seventh inning on Saturday en route to a career-high eight inning showing in which he tossed shutout ball. A top 100 prospect for three years running, Holmes looked as impressive Saturday as any Athletic minor league prospect this season, suggesting he may be ready for his first taste of the majors in the second half.

Pat Neshek, RP, Philadelphia Phillies (ESPN: 10.7 per cent; CBS: 15 per cent): Hector Neris has struggled, so Neshek is the new closer in Philly. Just don’t expect a ton of save chances for the sad-sack Phillies, but Neshek is now immediately no longer just useful in holds leagues.

Brandon Phillips, 2B, Atlanta Braves (ESPN: 34 per cent; CBS: 40 per cent): Phillips’ power keep waning, but he still hits for average (hitting safely in seven of the last eight and batting over .290 for the third straight year), and Ozzie Albies (foot) is not only on the DL, but not exactly forcing his way to the bigs.

Cameron Maybin, OF, Los Angeles Angeles (ESPN: 21.5 per cent; CBS: 38 per cent): As mentioned in the intro, the oft-injured veteran returned Friday with a monster game, tying the Angel record for steals in a game. Maybin can be a real offensive sparkplug for thes Halos, and he’s going to get his chances over the next few weeks.

By RotoRob
Tags: Fantasy Baseball, Gleyber Torres, New York Yankees
This entry was posted on Sunday, June 11th, 2017 at 3:40 pm and is filed under BASEBALL, RotoRob, The Wire Troll. You can follow any responses to this entry through the RSS 2.0 feed. Both comments and pings are currently closed.