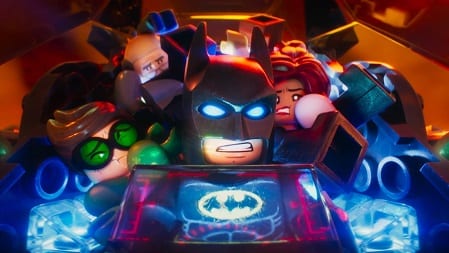 Why did you build this thing with only one seat!!?!

Ask anyone that saw the original LEGO Movie what the focus of any potential sequel would be and odds are the answer would’ve been Batman. The tiny Caped Crusader, voiced by Will Arnett, was a perfect counter to how serious the live-action version has become and was the most memorable part of a film that brimmed with fun moments.

This time, Batman gets top billing in The LEGO Batman Movie, and the only question is whether Arnett’s performance can move out of a supporting role and into the spotlight without losing its charm.

Batman’s ongoing quest to protect Gotham is going just as planned, starting with foiling another plot of the Joker to destroy the city. During the confrontation, Batman downplays his rivalry with Joker, which ends up hurting the Joker’s feelings and inspiring him to hatch an even more sinister plot. To that end, he and nearly all of Gotham’s villains surrender and are placed in Arkham.

Suspecting a trap, Batman, along with his ward Robin, travels to Superman‘s Fortress of Solitude to steal a Phantom Zone Projector that can banish people to the Phantom Zone, where the world’s most dangerous villains have been sent. Batman then uses it despite the objections of new commissioner Barbara Gordon, a decision that lands Batman and Robin in custody.

With Batman incarcerated, Joker’s plan quickly takes shape as he recruits a veritable who’s who of baddies (Sauron, Voldemort, Count Dracula and so on) and frees them from the Phantom Zone. It’s too much for Batman to handle alone, so he’ll need to confront his true fear of working with others in an effort to save Gotham.

Well, it turns out that if some Arnett at Batman is good, more is better. The performances drips with a massive lack of self awareness, and he delivers the lines with a perfect gravely tone made popular by Christian Bale. He’s always the coolest guy in the room, even when he isn’t. It’s already become a case where we can’t imagine someone else in the role.

Traveling to the Phantom Zone gives the film an excuse to trot out just about every villain you can think of, in and out of the DC universe. Seeing the shark from Jaws, raptors from Jurassic Park and the Gremlins all on the side of the Joker makes for plenty of nostalgic fun. Sure, it’s something they did in The LEGO Movie, but they’re more involved in the plot this time.

Arnett has plenty of help on the voice acting front with tons of well-known actors popping in to deliver a few lines (e.g. Channing Tatum as Superman, Billy Dee Williams as Two-Face) and Ralph Fiennes (as Alfred), Zach Galifianakis (Joker) and Michael Cera (Robin) shining in expanded roles — shout out to Doug Benson for his hilarious work as Bane.

One of the best things about LEGO Batman is that it has broad appeal, and it’s something that adults and all but the littlest of kids should be able to enjoy together. Although movies have done a better job of walking that tightrope in recent years, this is still one of the best to pull off that trick.

As much fun as we had with LEGO Batman, the movie carries a frenetic pace for nearly its entire 100 or so minutes. Jokes, action, cameos, one-liners, more action… it all starts to pile up the further you go, and by the end it has a wearying effect. It never quite reaches the point of diminishing returns, but it’s fair to suggest they could’ve dialed it back on occasion.

There are a ton of extras, ranging from “making of” production stuff to deleted scenes and some sketch-like shorts. While some of the deleted scenes never made it past the concept phase, and as a result are not fully rendered, they’re still well worth your time. We loved the hokey sketches, though, with Alfred hosting a cooking show, Batman joining the Canadian version of the Justice League and so on. It’s a great use of the medium to bring added value.

It’s hard to make it more than a couple of minutes at any point during The LEGO Batman Movie without something that makes you laugh or at least smile. It’s a ton of fun, and we sincerely hope we get another feature with Arnett’s masked vigilante down the road.

By HC Green
Tags: Blu-ray reviews, Channing Tatum, LEGO Movie, Movie Review, The LEGO Batman Movie, Will Arnett, Zach Galifianakis
This entry was posted on Friday, June 9th, 2017 at 11:30 am and is filed under Herija Green, Movie Reviews. You can follow any responses to this entry through the RSS 2.0 feed. Both comments and pings are currently closed.