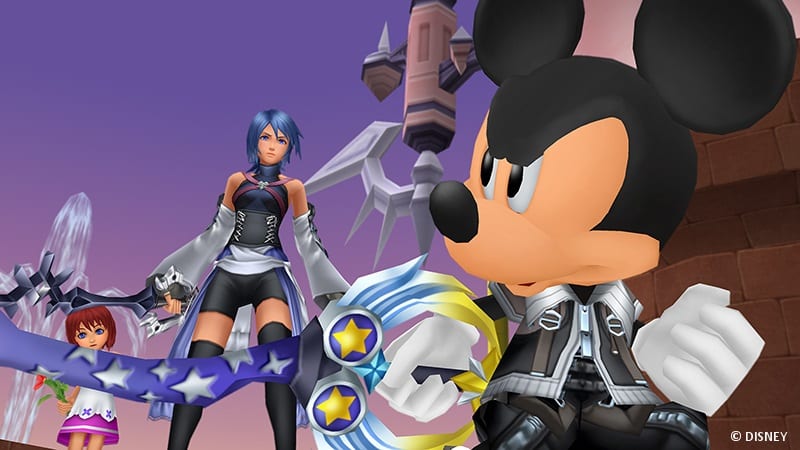 This review will contain a brief review of each installment, followed by our overall impressions of the compilation.

Kingdom Hearts Final Mix is a remastered version of the original game. The graphics have been cleaned up significantly and while they certainly look better than the original, they remain a bit grainy, especially by PS4 standards. This effect is most noticeable in cutscenes and when textures are viewed up close.

One other important issue is the controls. If we were playing the original, as opposed to a remaster, we wouldn’t think twice about them. However, the stiffness of the controls should’ve been addressed.

The highest hurdle newcomers need to clear is buying into the Disney-Square crossover in the first place. Hearing someone like Goofy deliver heavy exposition like, “Gawrsh, it looks like the whole world’s about to be destroyed, hyuck hyuck!” took us out of the moment. Once you get past the strangeness of the mashup, the story takes itself very seriously and can be quite melodramatic.

Chain of Memories is the first non-full release for the series and takes the franchise in a very different direction. This title has been completely overhauled from its original Gameboy Advance appearance, now employing the Final Mix engine. The game looks pretty much identical to its predecessor, but the major difference comes in the gameplay.

Instead of simply running around hacking up enemies with the Keyblade, Sora must now use cards to perform actions. Each card also has a different attack power attached to it, even if it’s the same move. The order of the cards is also random, meaning players are unable to control the strength of their attacks.

Once Sora runs out of cards, he must retreat in order to recharge. Each subsequent time he runs out, it takes longer to regenerate the cards, thus incentivizing short battles.

Another big change from the first Kingdom Hearts is how enemies interact with Sora in the environment. Instead of simply attacking the player and seamlessly transitioning to a battle scenario, once either Sora or the enemy touches the other, the player is transported to a separate battle screen. Only then will the number and types of enemies be revealed.

Overall, these alterations feel like a step in the wrong direction, evidenced by the fact that the series has never attempted to reuse any of the new mechanics. The game’s battle transitions spoil the immersion and it distracts players from what they want to do by forcing them to regenerate cards.

358/2 Days is the first movie in the compilation. Although it was originally a full game released on Nintendo DS, this version of 358/2 Days has removed all gameplay, instead focusing on the remastered cutscenes.

This installment is the first time players are introduced to Roxas, a Nobody with mysterious ties to Sora. It chronicles his induction into Organization XIII and his relationships with its members. The story is a bit easier to follow than other installments, and is a far stronger entry in the series than the other movie in the compilation.

The biggest problem is its transitions. The movie is cobbled together from the game’s cutscenes, but there are awkward cuts when the gameplay should begin. Instead of playing, players read a short summary of the action that occurred, and then it transitions back to the movie.

Kingdom Hearts II Final Mix is arguably the strongest title in the franchise. The storytelling is deeper and flows much more naturally, and many of the technical issues in the first Kingdom Hearts have been corrected. Although the improvements are welcome, the changes are not a product of the remaster but rather the original development of Kingdom Hearts II. Roxas plays a pivotal role in this installment.

Birth by Sleep Final Mix is the black sheep of the compilation. The story follows Terra, Aqua and Ventus, all of whom wield a Keyblade. Ultimately, this entry feels less polished and the story unnecessary to the overarching plot. The gameplay is very similar to KH II, but it adds some unique attributes for the three characters.

Lastly is Kingdom Hearts Re:coded, which closely follows the story of the original. The premise is that Jiminy Cricket’s journal entries have disappeared, and he takes them directly to Mickey Mouse for analysis.

This inadvertently creates another version of the Kingdom Hearts universe inside their computer, complete with a digital Sora. Digital Sora needs to clear the corrupted files by completing the same quests as the first game. This game is definitely the weakest of the bunch, providing little new content.

If you’ve never played a Kingdom Hearts game before, II.5 + II.5 is a great way to get caught up in a hurry. That being said, the older games definitely require nostalgia glasses while others lack the polish of the main games. If you already own the previous compilations, there’s little reason to buy them again for a new console.