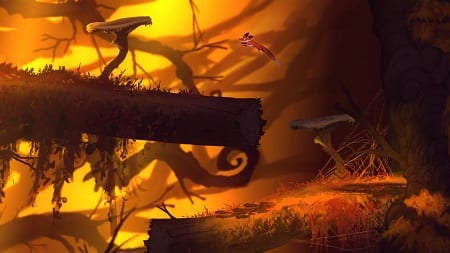 It’s hard not to look at Seasons After Fall, the third console release from developer Swing Swing Submarine, and see the influence of Moon Studios’ excellent Ori and the Blind Forest. Most of the similarities turn out to be superficial, however, and Seasons After Fall proves to be more about solving environmental puzzles than platforming precision.

There’s no combat or enemies of any sort here, and the fox you control can only do two things at first: jump and bark. However, you’re immediately dispatched on a series of four fetch quests, each of which ends with you gaining the power to change the weather to a specific season. Each path teaches you some aspect of the game’s mechanics on the way back to the sanctuary.

Once you’ve collected all four, the meat of the game begins. As you seek to help the Guardians of the forest prepare for a ritual, you’ll need to manipulate the weather to progress. This is done with a flick of the right stick with a different season assigned to each cardinal direction. It works well, though there were times were the season change would abruptly stop and need to be started again.

As noted, Seasons After Fall‘s gameplay is primarily solving puzzles, the basics of which is that various plant and animal life respond differently based on what season they’re in. For instance, a giant plant may spit out a huge snowball in winter but during spring it dispenses a large amount of water — the former allows you to reach higher ledges while the latter can make a seedling grow into a tree or break through a weakened log.

Sometimes the relationship between the seasons and an object is obvious: gushers run low in fall, high in spring and freeze in winter, so if you need to reach someplace up high you’ll switch to spring and then winter to create a vertical pillar of ice. Other times it’s more obtuse, but since there’s only one solution to a problem and a limited number of ways to try, you should almost never be stuck for long.

Presentation is Seasons‘ calling card. The hand-drawn art style looks great, and the seamless changing of the seasons causes an immediate wave of different colours and weather effects to wash across the screen. There isn’t a ton of acreage in the game, which is a bit disappointing, but it’s hard to find fault in what’s actually there.

While it’s not as strong as the graphics, the soundtrack still delivers. It’s mostly a selection of mellow earthy orchestral tunes that feed into Seasons‘ overall laid back vibe. The weakest link on the audio side is the narration. It isn’t bad, there’s just nothing interesting about it in a place where a more engaging performance could’ve helped tell a rather straightforward tale.

Without going into further detail, Seasons‘ story is enough to move from one beat to the next. Beyond that it’s ultimately pretty hollow. You’ll get new bits of information from the Guardians or the entity each time you complete a task, but from moment to moment it’s just you and the forest.

There’s a certain level of relaxation that goes with that, allowing you to move at your own pace and tackle objectives in whatever order you see fit. A byproduct of that, however, is that the game contains very little challenge. There are no enemies, your fox cannot be hurt and there aren’t even any places where missing a jump means a significant loss of time.

Seasons also takes a while to get going. The first four “missions,” in which you’ll collect the power to change seasons, all feel like tutorials, so by the time the game really cuts you loose you will have already played around two hours and seen much of what there is to see. Future objectives continually take you back to the same areas with some smaller one offs — such as a previously inaccessible underground.

Despite its simplicity, the visual allure of the world and clever puzzle structure kept us moving forward and looking for the semi-hidden locations that allow you to dream and get additional info about the relationship between the entity and the Guardians. Outside of a maddeningly vague section built around arranging cicadas, we never got bogged down.

It’ll take around six hours to finish the game, a bit longer if you want to find the dream sequences and track down all the flowers, and it’s time reasonably well spent. It’s worth noting we did encounter a couple of bugs — one that wiped out our original save (booooo) and one in which we fell through the world.

With its beautiful graphics and mellow songs, Seasons After Fall is a pleasant experience that falls short of greatness due to its overly simple gameplay and smallish world.

By HC Green
Tags: Focus Home, Moon Studios, Ori and the Blind Forest, Seasons After Fall, Swing Swing Submarine, Video Game Review
This entry was posted on Monday, May 22nd, 2017 at 9:10 pm and is filed under Herija Green, Video Game Reviews. You can follow any responses to this entry through the RSS 2.0 feed. Both comments and pings are currently closed.