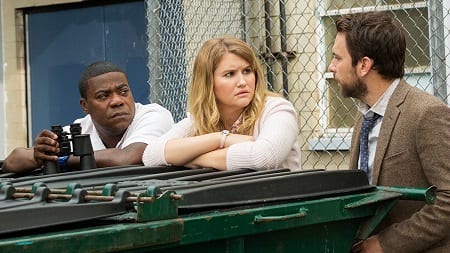 Ah, stupid comedies… where would the world be without them? We don’t know, and, quite frankly, we don’t want to know. As luck would have it there seems to be a near-endless stream of them in recent years, though clearly not all are created equal. So let’s see if Fist Fight, the feature-length directorial debut from Richie Keen, can join the ranks of the iconically idiotic like Pineapple Express and Ted.

It’s the last day before summer break at Roosevelt High School, and the unruly students have amped their mean-spirited pranks up to 11. Making matters worse for the faculty, the school board is slashing the budget by firing many of the teachers. This is of particular concern for Andy Campbell (Charlie Day), whose wife is pregnant with their second child.

While Campbell tries to lay low, roll with the pranks and keep his job, he’s drawn into the orbit of no-nonsense Ron Strickland (Ice Cube), who insists Campbell help him in troubleshooting a VCR. As the two of them try to isolate the problem, Campbell realizes a student is using an app to shut off the TV. When he tells Strickland about it, Ron is enraged and destroys the desk with an axe.

Shortly thereafter both men are summoned to the principal’s office, and while both stay silent initially, Campbell eventually reports Strickland when Principal Tyler (Dean Norris) threatens to fire them both. After the meeting, Strickland confronts Campbell and informs him that after school that day, the two of them are going to have a fight — a prospect that terrifies Campbell.

While Day’s manic behaviour grows thin, he’s supported by a number of funny characters in his orbit. Jillian Bell, once again playing a slightly different version of her 22 Jump Street persona, gets many of the best lines, while SNL veteran Tracy Morgan basically reprises his role from 30 Rock as the school’s football coach. Kumail Nanjiani is the best of the bunch, however, as the cowardly security guard.

Angry Ice Cube is the best Ice Cube, and that’s reinforced here. Sure, it’s a one-note performance, but his constant glowering and simmering fury are a welcome counter to Day’s squealing and the general goofiness of all those around him.

At less than 90 minutes, Fist Fight doesn’t waste time, and that works to its benefit. Even if there are multiple jokes that fall flat, odds are there’s something that’s going to hit in the near future. The dance number with Campbell and his daughter is hilariously inappropriate, and the fight itself is suitably over the top and ridiculous.

There’s something inherently unlikeable about Day’s character, even though in real life his situation is probably the most sympathetic — you have a family, you need to protect your job. Day’s high-pitched squeaky voice has something to do with it, as when it’s paired with Campbell’s unrelenting energy and loads of screen time it gets to be too much.

It’s not that plot is particularly important in this kind of film, but odds are you’re going to able to predict every storyline beat from beginning to end. In that way, Fist Fight‘s utterly derivative three-act delivery makes this more a collection of hit-or-miss jokes than a fully realized film.

While most of the supporting roles are enjoyable, uber-talented Christina Hendricks has a brief yet utterly bizarre turn as a teacher that wants Strickland to kill Campbell in their fight. It’s a weird overlap of dark humour with stupid humour, and it doesn’t fare well.

A collection of deleted scenes, along with a few outtakes, are available. Most are either extended versions of what’s in the film or largely unfunny, but the Strickland stories montage is pretty good and could’ve been left in.

For better or worse, Fist Fight assaults you from start to finish with a string of raunchy jokes and absurd situations. If you like stupid comedies it’s worth a look. Just check your brain at the door.

By HC Green
Tags: Blu-ray reviews, Charlie Day, Fist Fight, Ice Cube, Movie Reviews
This entry was posted on Friday, May 26th, 2017 at 9:36 pm and is filed under Herija Green, Movie Reviews. You can follow any responses to this entry through the RSS 2.0 feed. Both comments and pings are currently closed.