The Wire Troll: Jed Lowrie on Fire in Oakland 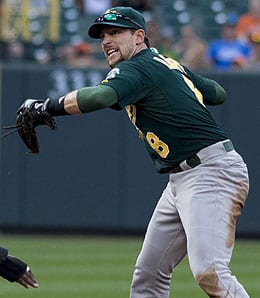 Jedd Lowrie could be playing himself into becoming trade bait. (commons.wikimedia.org)

Welcome back to another week of Fantasy baseball, as we present our final waiver wire recommendations for the month of May. The season is now truly meaningful, so better know which side of the fence you sit on — contender or pretender. Remember that very soon, the Super Two worries will be gone for 2017, meaning starting next week, you will see an influx of prospects making their way to the Show.

This week, Stephen Strasburg continued his fine bounce-back season with a career best 15-punchout performance against the Padres; baseball lost one of its most distinguished dignitaries with the passing of Jim Bunning, a nine-time All-Star and former Kentucky Senator; and Jameson Taillon (cancer) will begin a rehab assignment Sunday.

Jed Lowrie, 2B, Oakland Athletics (ESPN: 28 per cent; CBS: 28 per cent): Before taking an 0-for-4 (with three Ks) and getting tossed out early on Saturday, Lowrie had been among the hottest hitters in the bigs, hitting safely in eight straight games. Included in that run was a four-hit performance (see video below), a pair of three-hit showings and two more games of two hits apiece. The run helped the veteran raise his BA from .262 to .310, so if your team needs a boost in that department, jump on Lowrie.

Chase Anderson, SP, Milwaukee Brewers (ESPN: 23.4 per cent; CBS: 40 per cent): Even though it slipped last year, Anderson has always had solid command. And although he had really struggled in his previous five starts, he reminded us Saturday that he’s a pitcher that needs to be on your radar, taking a no-hitter into the eighth inning en route to seven shutout innings of one-hit ball with 11 strikeouts against one of the top hitting teams in the bigs (Arizona). Anderson is durable, and in well on his way to shattering his career high in innings pitched, so give him a look if you need pitching help.

Tyler Wade, SS, New York Yankees (ESPN: unowned; CBS: 1 per cent): The Yankees’ fourth rounder from 2013 slipped on the team’s prospect rankings last year, but not because of his performance — mostly it was a result of the influx of talent from all the trades the Bronx Bombers made. Meanwhile, Wade — just 22 — has shown tremendous defensive flexibility at Triple-A, while putting up a robust .307/.380/.436 slash line. If Chase Headley keeps struggling, could Wade get the call to replace him at the hot corner? At the very least, Wade has put himself on the map as a super sub option for the Yankees. Players in that kind of role can often have surprising value (think Ben Zobrist in his heyday).

Brad Hand, RP, San Diego Padres (ESPN: 9.9 per cent; CBS: 21 per cent): Hand, the Marlins’ second rounder in 2008, suddenly has found himself closing in San Diego. Yes, both his saves have been shaky, and there is speculation that the Padres are just using him in this role to showcase him for a trade, but saves are saves, and right now, Hand is bagging ’em, so you have to give him a look if you need help in this regard.

Mike Pelfrey, SP, Chicago White Sox (ESPN: 0.5 per cent; CBS: 1 per cent): Signed to a minor league deal early this season, Pelfrey was quickly summoned to the Pale Hose with the team’s rotation dealing with multiple injuries. Not surprisingly, the veteran was pretty awful, but after starting out 0-4 in his first five starts, he’s suddenly turned the corner. Pelfrey has won each of his last two starts, giving up just eight hits and three runs (two earned) over 11 innings, with 10 strikeouts against just one walk. After looking useless in Detroit last year, he is putting up better results this season despite some serious long-ball issues. At the very least, Pelfrey deserves consideration as a streaming option right now.

Shin-Soo Choo, OF, Texas Rangers (ESPN: 8.1 per cent; CBS: 40 per cent): This brittle Korean struggled to stay healthy last year, but has already nearly matched his game total from all of 2016. Choo has been productive, and — as always — is being an on-base machine, recently finding himself as the Rangers’ leadoff man against righties. He’s no longer a 20-20 threat, but is still a useful Fantasy option.

Russell Martin, C, Toronto Blue Jays (ESPN: 24.2 per cent; CBS: 49 per cent): Martin’s slash line has been in decline since he came to Toronto, but he’s putting together a nice season, OBP-wise, helping him score plenty of runs. The fact that he may qualify at third base this season doesn’t hurt, either.

Brad Peacock, RP. Houston Astros (ESPN: 7.8 per cent; CBS: 21 per cent): Peacock will take the rotation spot of Mike Fiers starting this week. It’s hard not to get excited about this development given that Peacock has fanned 30 in 20 2/3 IP this season.

Greg Garcia, 3B, St. Louis Cardinals (ESPN: 0.5 per cent; CBS: 1 per cent): Garcia should get regular PT with Kolten Wong out. Garcia offers elite strike zone judgment and the chance to qualify at several positions.

Pablo Sandoval, 3B, Boston Red Sox (ESPN: 6.4 per cent; CBS: 19 per cent): Sandoval (knee) could return Monday just in time for Boston to start a 10-game road trip. The BoSox desperately need a solution at the hot corner, so if Panda can supply it, he’ll be gold.

By RotoRob
Tags: Jed Lowrie
This entry was posted on Sunday, May 28th, 2017 at 6:11 pm and is filed under BASEBALL, RotoRob, The Wire Troll. You can follow any responses to this entry through the RSS 2.0 feed. Both comments and pings are currently closed.